This story is made for your ears. Please push play above!

Every week, hundreds of people board coach buses in Chicago and travel to Mexico. I used to live in Mexico, and have taken the 2,000-mile trip nearly a dozen times to and from Zamora, Michoacán. On my most recent trip, I brought a tape recorder along, and made this audio travelogue.

The soundtrack of a bus trip to Mexico consists of the driver on the public address system, the 45 other passengers and their snores, cries,the rustle of plastic bags, cell phone conversations, back-to-back movies shown on the six screens suspended from the ceiling, the bus driver’s radio, and always, the drone of the bus engine .

Every time you start one of these trips, you consider the variables. And you hope. Sleek paint jobs and tinted windows mean these buses almost always look better on the outside than they do on the inside. The small amount of legroom can be alarming, and uncomfortable. Other variables: the temperature, the smells.

How lucky are we? I ask our driver.

Oh, beautiful, beautiful! We got Wi-Fi, we got a switch where you can recharge your battery.

The driver tells me his approach to the job: make everybody happy. His immediate strategy involves 80s music on the radio (for him) and back-to-back movies (for us). Lethal Weapon 3 is in progress as we board. It’s repeated later in its entirety, for those who boarded late.

Chicago is connected to a world of small Mexican towns that most people have never heard of. If I want to visit my mother-in-law in provincial Mexico, I can walk to a bus station in my Chicago neighborhood and buy a direct ticket to Zamora, Michoacán (well, they call it a direct ticket, you’ll see what that means).

The ride takes 48 hours, two days and two nights. And, no, there is not a sleeping car.

Like most people on the bus, my family of five is here for one reason: during peak travel seasons, it’s a lot cheaper than a plane.

Welcome and good afternoon, ladies and gentlemens. Thank you for choosing El Expreso. I’m sorry for the de-late.

The names of the bus lines traveling to Mexico are meant to make you think the trip will fly by. There’s El Conejo, the Rabbit. Tornado. We’re traveling this time on El Expreso (right.)

Every two-day bus trip starts with a little welcome speech. And every speech includes some variation on this rule:

Do NOT use the bus bathroom—basically, unless you’re dying. Absolutely no Number 2.

From the moment you buy your ticket, you’re stepping into a different world, a world you do not control, a world where things will not go as planned, small things and big things.

Last year, we were stranded for 20 hours in Matamoros. Another time, one of the side windows of the bus just fell out. The driver went back to look for it on I-35—no luck. So we just kept going, the 100-degree Texas heat blowing through the bus all the way to Dallas.

These bus companies have been sued over accidents; I try not to think about that when I buy the tickets.

If you do this trip a few times, you get to know all the stops: Effingham, Illinois; Matthews, Missouri—that’s where we are right now. The sound of the bus is everywhere. Even when you’re not on it, it’s idling nearby. We look pale, dazed under the fluorescent gas station lights. 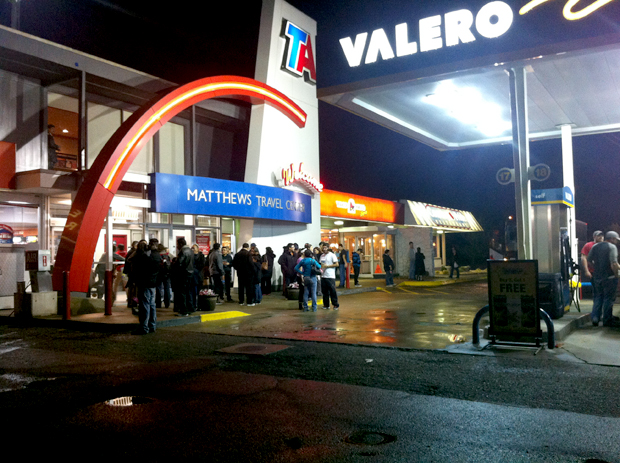 Next will be Jackson and McComb, Mississippi; Lafayette, Arkansas; Houston, Beeville, and McAllen, Texas. And on the Mexico side: Monterrey, Matehuala, San Luis, Celaya, Zamora.

We pack the TA Travel Center bathroom. We brush our teeth, line up for the toilet, spray deodorant, change the babies. Little by little you get to know where everyone is from, where everyone’s going, places that have sent generations of immigrants to the Chicago area, mostly: Michoacán, Zacatecas, Jalisco. The college student from Beloit is going to Durango.

Yeah, so it’s like, another 13 hours after Houston. I don’t even know… I get motion sickness, so I’m like half awake, half asleep the whole ride.

She’ll come back in a week, do this all again but in reverse.

The lady from Guanajuato, I feel like I know her life story. (Would this ever happen on a plane?) How her daughter got married at age 16, how she made a deal with God to get her immigration papers...

The movies stop and the lights get turned off at 11:30 pm. The clatter of the bus over the highway is rhythmic. Snores follow, the click click of video games continues.  Low voices talk on phones with girlfriends back in Chicago.

While the bus companies in Chicago sell you “direct” tickets to little towns in Mexico, that doesn’t mean you’re riding the same bus all the way. In Houston, we all get off.

And that’s when I meet Eliseo Orejel. He’s traveling with his wife and three kids. They’re from LaGrange, and it just so happens they’re also travelling to Zamora.

Eliseo is surrounded by suitcases.

Here--everything, up to there. Because we’re allowed 400 pounds. Two 40-pound bags per (person), and we’re five. I’m like 345 pounds. But more than half of this is staying over there, so….

Do you think we’re going to have any adventures on this bus trip? I ask. They immediately know what I mean by “adventures.”

Yes! I think so! They say. They recount past adventures. Like, one time a wheel popped. We could just feel like the bus was getting lower on the back. And it took a long while. And then it popped again.

I can top that! One time I actually drove the bus. Well, it was a passenger van at that point, but still!  The driver wanted to make some extra cash by dropping a señora off at her out-of-the-way village, up in some hills.  It was rainy season, and we got stuck in the mud. So I drove, the driver and my husband pushed, and our kids watched from the edge of the muddy farm field.

Mexico has a great bus system. The buses are modern. They run on time. Most everything is computerized. These international immigrant buses hand out paper tickets. They oversell seats. They never know how many people to expect, or what their final destinations are.

After an hour or so in Houston, we are issued new handwritten paper tickets. And we’re on our way, though for some reason Eliseo, the guy going to the same place we are, is not on our new bus. 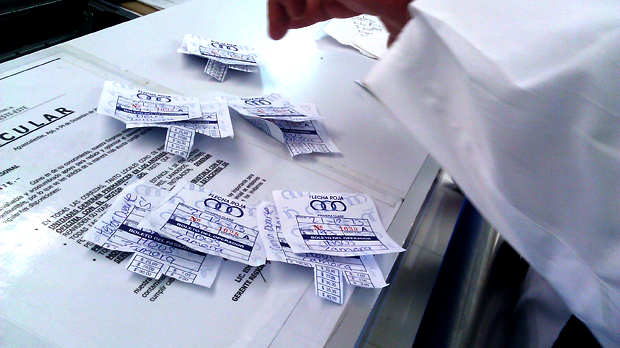 Our feet are swollen from sitting so long. People doze. Behind me, a señora talks on her cell phone.

Next time I’m going by plane, she tells someone.

The granddaughter traveling with her gets on the phone next, with an older sister.  Then there are miles and miles of Vanessa, age 9:

Oh, um… did you find those little ligas to make the bracelet? It’s so HOT in here.

One thing about traveling on these bus lines: Every time we pull into a station, we wonder two things: what will the next bus be like—are we trading up or down? And when will it leave?

When we get to McAllen, it’s dark already.

Things don’t go well. Not everyone fits on the next bus, we’re told. Or perhaps it is the luggage that does not fit—there are conflicting stories. The official says he’s only boarding to three cities.

He promises he has two other buses in the wings, but nobody quite believes him, and nobody wants to sleep in McAllen.

Finally, another bus does show up—and so does Eliseo Orejel—the guy with the 345 pounds of luggage.

Nos volvemos a encontrar! What a mess, now it’s REALLY messed! he greets us.

As we get underway, the passengers debate which bus line is the worst.

At this point, we’ve been traveling 30 hours. We’re 6 hours behind schedule. This is our third bus.  And that is the context for what happens next.

The driver gets on the loudspeaker.

Can you hear me? The driver asks. We’re right on the border now.

Ladies and gentlemen, he’s says. We’ve come to a fiscal checkpoint. I hate to tell you this. But the customs official has let me know that we are going to have to take everything—everything—off the bus. Everything we have in the compartments underneath the bus, everything inside the bus. And we’re going through customs.

However, the bus driver says, the customs official has mentioned something: If we take up a little donation, he says, we can avoid customs completely.

This kind of shakedown has happened on every bus trip I’ve ever taken to Mexico.

How much already? one passenger shouts.

The driver suggests a $5 donation per person, which passengers revise to $5 per family. We’ve been charged $20 per family before, but if you go higher than that, people without much luggage—or people without anything that might interest a customs official—start to grumble.

Have your money out, the driver says. I’ll come by to collect. 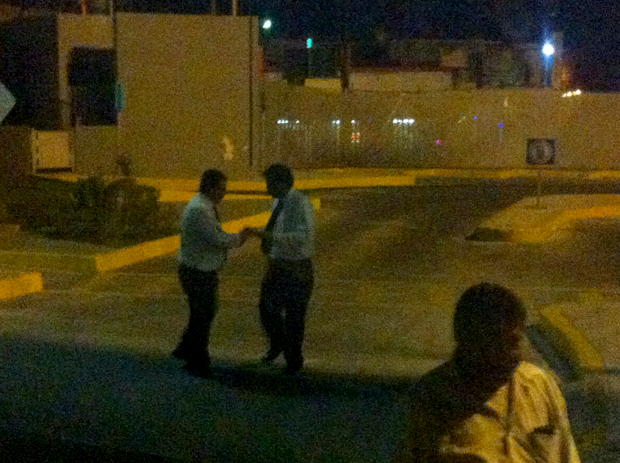 Once he’s been through the bus, the driver steps out into the cool Reynosa air—he and another guy in a button-down shirt compare big wads of cash. Inside the bus, the passengers shake their heads and joke.

When the driver comes back, we drive right under the checkpoint with the giant red letters that say MÉXICO.

Incredibly, we change buses two more times after this, including in Monterrey, where a young official tries a trick I have never heard before:

He tells us there will be no buses to any destination for 10 days.  So when one appears only two hours later and our names are called, it feels like a gift!

Oh, and the LaGrange family going to the same place we are? Not on this bus. 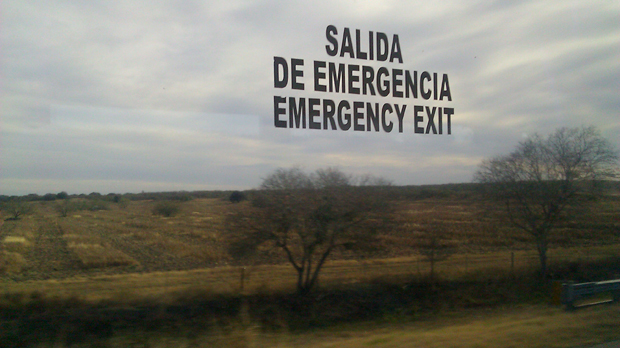 As we get further and further into Mexico, the frustration in the bus dissipates. Along with all the delays there are also homemade tortillas at a roadside restaurant. Barbacoa tacos. Soup. The warm sun. And the thought of piñatas and weddings and quinceañera parties, all the family waiting for us.

It’s been a pretty good trip, the guy in front of me says.

The bus official at our very last stop –51 hours down, 4 to go—sees it like this:

The good thing is you’re almost there. Have a very nice trip. Welcome to Mexico.

I was not going to tape on the return trip to Chicago. But I could not help myself when this happened…

Buses inside Mexico are equipped with annoying, piercing alarms that sound every time the driver goes over the speed limit. These international immigrant buses don’t usually have those alarms. But yep, we got one.

All night long, no one complained.

I feel that’s a very Mexican response, I tell my Mexican husband.

What would be the point of complaining? he asks. The driver can’t do anything but go slower. And we don’t want to go slower. But he agrees: if this had been a bus full of gringos, they definitely would have complained.

The bus beeped all the way to northern Mexico. It was still dark, but ahead I could see a long, thin line of lights running left and right across the highway— the border.

The thing about taking the bus to Mexico, you actually physically feel the distance between the two places that make up your life. You feel the border—with its checkpoints and flashing lights and immigration officials with their walkie-talkies.

On the way back to Chicago, the bus drivers put on classic Mexican movies, heightening nostalgia for the place we were leaving behind, the narrow black highway stretched out like a thread between Mexico and Chicago, the bus moving along it. 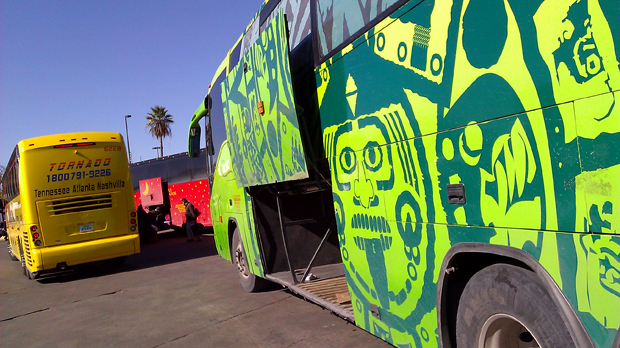