Editor's note: Chris Bentley answered Janice Thomson's question about a week before Chicago's City Hall announced new developments regarding the municipal aggregation deal mentioned here. In an update, we take another look at the question posed here, given that there's new information on the role of wind power and natural gas in the city's municipal aggregation contract. But Janice's question also prompted us to wonder if other people are considering choosing alternative electricity providers. We've been hearing from many people about why or why not. You can have your say right now as well.

Curious Citizen Janice Thomson does not consider herself an environmentalist.

“Environmentalist has this different kind of connotation,” said the northsider. “I think of environmentalists as people who go hiking. And I don’t. But I’m obviously concerned about impacts on our earth, our air, our ability to grow food.”

After five years living in Brussels, Belgium she got used to regular media coverage of climate change and renewable energy. Back in the U.S., even a record low in arctic sea ice failed to elicit any mention of the issue during the 2012 presidential debates — the first time that has happened since 1988. 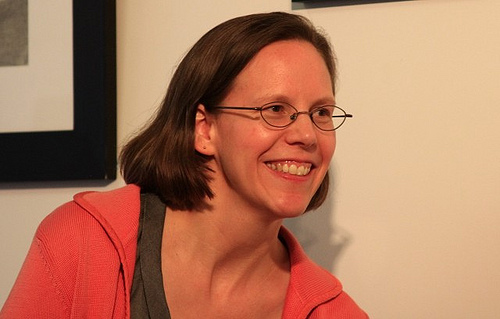 “When I came back to Chicago [in 2011] I was looking for a renewable supplier for my energy,” Thomson said. Along with about 56 percent of Chicago voters, she voted yes on the 2012 referendum for municipal electricity aggregation, hoping it would expand the market for wind and solar power.

Then she got a letter from Integrys Energy Services, the city’s new electricity supplier, touting the city’s “cleaner” energy supply.

Chicago struck a two-year contract with Integrys, replacing Exelon subsidiary Commonwealth Edison and reportedly saving households $150 on average per year by 2015. Crain's Chicago Business reported Integrys won the deal with a fee of about $8.8 million, about two thirds the price of runner-up Exelon. Energy prices change daily, and low prices are not guaranteed forever, but the contract gives the city an option to switch after May 2014.

The deal didn’t deal just with energy, costs, though; it also eliminated coal, which used to provide roughly 40 percent of Chicago’s power, from the city’s fuel mix. So our Curious Citizen wanted to know:

Now that Chicago has a new electricity supplier, how much of the city’s energy would ultimately come from natural gas via fracking?

Jennifer Block, a spokeswoman for Integrys, said the new fuel mix would be “primarily” natural gas. Integrys buys electricity wholesale from many power plants and passes it along to distributors like ComEd. The company won’t divulge which power plants it buys from, which can and do vary constantly based on the price of those power plants’ electricity. Integrys can’t track individual electrons as they make their way through the grid, so Chicago’s no-coal requirement just means Integrys will need to verify that at any given time they have enough non-coal power in their possession to satisfy all of the city’s demand. Because it is currently inexpensive, natural gas-fired electricity will satisfy the brunt of that demand. 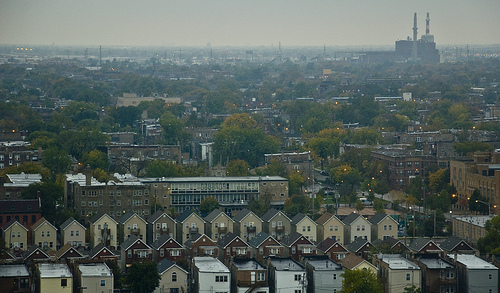 But for Thomson and self-identifying environmentalists alike, trading one fossil fuel for another might be considered a Pyrrhic victory at best. “I didn’t know that clean energy wasn’t the same as renewable energy,” Thomson said.

The city’s requirement that its new energy supplier drop coal was the first of its kind, and the Chicago Clean Power Coalition endorsed aggregation as a means to promote renewable energy in the future. Currently the city’s deal only requires Integrys to meet the state Renewable Portfolio Standard (RPS), which rose this year to 7 percent. The RPS ramps up gradually in pursuit of the state’s 25 percent by 2025 goal. Solar, wind, biomass, hydroelectric, anaerobic digestion, biodiesel and landfill gas — methane, essentially natural gas, recovered from landfills — count towards the state’s RPS, but natural gas mined from the earth through fracking or other methods does not.

According to the Environmental Protection Agency, natural gas-fired power plants emit about half as much carbon dioxide, less than a third as much nitrogen oxides, and one percent as much sulfur oxides as coal plants. That’s the main basis for calling natural gas a “clean” fuel — it’s clean compared to coal.

“Clean sounds nice,” Thomson said, “but it doesn’t mean what you think it does. I felt duped.”

Thomson shares many environmentalists negative opinion of the controversial drilling process of high-volume hydraulic fracturing, commonly known as fracking. Joining the religious environmental consortium Faith in Place on a lobbying trip to Springfield, Janice helped call for a moratorium on fracking, and then later, when an outright ban seemed unlikely, for strong regulations on the practice. Governor Pat Quinn signed the regulatory bill into law on June 17.

While emissions from natural gas power plants are substantially lower than those from coal plants, the process of extracting and transporting the resource is fraught with technical challenges. 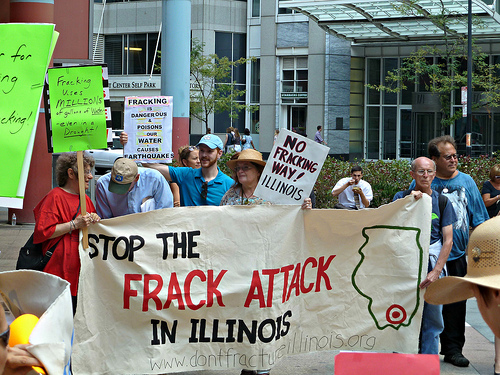 “Unconventional” oil and gas resources are so-named because they have previously been impossible to dig up economically. But innovations in drilling technology have brought together fracking, in which drillers blast water, fine sand and chemicals to break up porous rock containing fossil fuels, and horizontal drilling, which allows a single rig to explore long, flat sedimentary rock formations thousands of feet underground without drilling straight down from the surface many times. The resulting practice has opened up massive stores of previously out-of-reach oil and gas.

It has also sparked environmental concerns. When well casings fail, for example, fracking fluid  and other material can contaminate groundwater. Drillers recover much of the fluid used in fracking, but some is left deep underground. And in areas stricken by drought, the water-intensive process has sparked fights over water use.

Then there’s global warming. Methane, the primary component of natural gas, is a far more potent greenhouse gas than carbon dioxide, and how much of it leaks into the atmosphere as a result of fracking is a topic of heated debate. Many environmentalists argue even if methane leakage is low, the math says we have to start leaving fossil fuels in the ground to avoid catastrophic climate change.

The drilling industry calls Illinois’ regulations the toughest in the nation, noting provisions for water quality monitoring and oversight from state environmental agencies. In 2010 Congress ordered the EPA to investigate whether fracking posed risks to drinking water, with results expected in 2014. The results of that study were recently delayed until 2016.

Drillers have already leased land in 17 Illinois counties and, according to an Associated Press investigation of state records, at least one company has already attempted high-volume fracking in the state. But the Illinois Oil and Gas Association’s Brad Richards said it will likely be at least six months before the first permit is issued.

“Realistically this thing’s a year or more out before we see any significant production going to market,” Richards said, noting that test wells first need to verify how much oil and gas is actually in Illinois’ New Albany Shale play. Drilling itself takes time, and pipeline infrastructure would have to be built to transport large quantities of gas.

Even when they do hit the market, Illinois’ resources are heavily weighted towards oil, not gas. Gas is very cheap at the moment, Richards said, “And these companies wouldn’t be here leasing if they believed it were a dry gas play.”

Nationally about 40 percent of U.S. natural gas production was from shale formations in 2012, according to Jonathan Cogan of the U.S. Energy Information Administration. That share is growing, so it’s likely that at least some of the electricity Integrys buys from natural gas power plants comes ultimately from fracking. 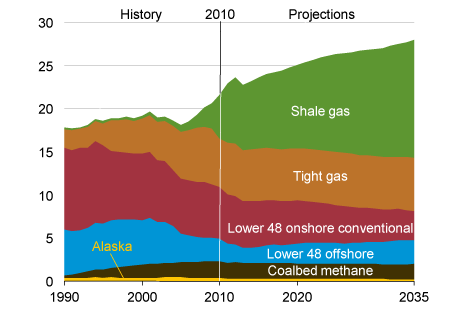 It’s impossible to tell exactly how much fracked natural gas ends up as electricity in Chicago, Integrys’ Jennifer Block said. The same problem afflicts opponents of particular types of oil.

“People sometimes want to boycott products made from Canadian Oil, for example,” said the Illinois Oil and Gas Association’s Brad Richards, “but once it hits the refinery, oil is oil, baby. The golf balls, the plastic bags, the gas in your tank — who knows where what came from.”

Someone like our Curious Citizen who wants to avoid any connection with fracking could opt-out of the Integrys program altogether without a cancellation fee. Many suppliers offer customers “100 percent green” options, which generally rely on Renewable Energy Certificates (RECs).

Essentially renewable energy derivatives, RECs accumulate at any renewable energy power plant that generates electricity. A wind farm in Iowa, for example, could sell its RECs to a city in Illinois looking to offset pollution from a predominantly fossil fuel-fired electricity supplier.

Consider Evanston. The north suburb’s own electricity aggregation deal calls for an audit of the electricity supplier — at first Constellation, now Verde Energy — to make sure they are purchasing enough RECs to offset 100 percent of the city’s electricity use. According to their most recent environmental disclosure statement, Verde’s actual electricity still comes mostly from fossil fuels. But Evanston’s sustainability coordinator, Catherine Hurley, said RECs move the market nonetheless.

“Wind energy assets run at a very small margin, so the additional revenue stream that RECs offer really does help make the case for developing renewable energy,” she said. “Currently it’s the best, easiest and cheapest option for us to take the next step forward.” 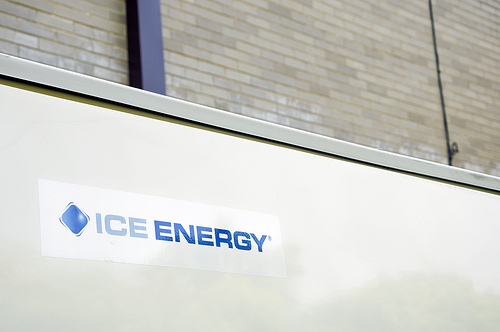 Verde’s contract with Evanston offsets 100 percent of the city’s energy with RECs at a rate lower than competitors.

“The reason to do it is two-fold,” said Evanston’s mayor, Elizabeth Tisdahl. “It saves money and it reduces your carbon footprint. What could be better?”

And no matter what supplier a consumer chooses, there is one universal option to lessen demand for nonrenewable resources.

“One thing consumers can do is use less,” said Tom Wolf, of the Illinois Chamber of Commerce. “Every kilowatt you don’t use is one that doesn’t have to be produced.”

RECs may not be the ideal means of encouraging renewable energy deployment, but they are a useful tool for communities like Evanston that aren’t near many utility-scale renewable energy power plants. Likewise municipal aggregation itself could give a voice to citizens who want more control over their power supply.

“In 2012 Chicago asked the question of which suppliers can give us coal free electricity,” said The Sierra Club’s Illinois Chapter Director Jack Darin. “In the future Chicago or other cities are free to ask, ‘Who can give us gas-fired power that didn’t come from fracking?’ We’re just really at the tip of the iceberg in innovation here … at the end of the day the demand for all energy starts with us.”

Chris Bentley writes about the environment for WBEZ. Follow him @cementley