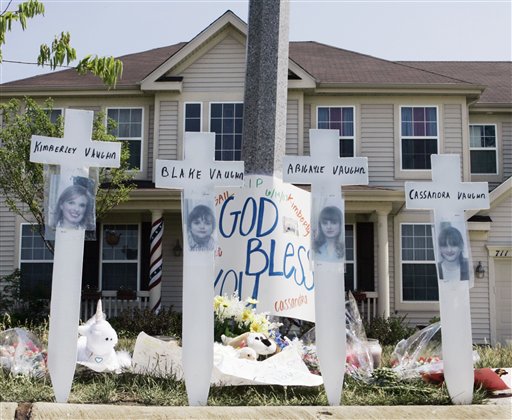 Lead Story: In most cities, the case of a man charged with the horrific murders of his wife and three children would make headlines for the duration of the trial. But in Chicago, the murder trial of Christopher Vaughn has played second fiddle to a number of other stories this year: the teachers strike, Chicago's overall murder rate and the circus that was the Drew Peterson trial. In fact, while people were distracted by that surreal circus, they probably missed the equally strange twists and turns in the Vaughn case. But the Vaughn case heads to closing arguments today, and still, it barely registers for most Chicagoans.

Unlike the Peterson case, there’s nothing sensational about Vaughn's case — it’s just horrific. Vaughn is accused of killing his whole family; the defendant claims it was his depressed wife who killed the children and then herself. It’s hard to face a story like this, to sit through updates about a man who allegedly blew money on strippers and planned to escape to the Canadian wilderness once he murdered his family — it’s too real. If we don’t look closely at it, maybe we can pretend something this horrible just didn’t happen.

Also: Ald. Proco Joe Moreno (1st) has backed down on his stance against Chick-Fil-A and will now allow the fast food restaurant to open a location in Logan Square. Moreno had previously said he would block the restaurant from building in his ward because the chain’s non-profit arm has donated money to anti-gay political causes over the years (Chicago wasn't alone here: Boston's mayor also said the chain wasn't welcome). But now Moreno says Chick-Fil-A has assured him it will no longer donate to those causes, and the alderman, who feels more and more like he’s eyeing a run for mayor one day, has given the thumbs up. Maybe now we won't have to read Facebook posts about chicken sandwichs anymore.

And then: Fans were happy when the Chicago Cubs confirmed they would move their Single-A minor league franchise from Peoria to Kane County, putting the team closer to the city of Chicago. But who should swoop in to claim the Peoria Chiefs as their own franchise? None other than the Cubs’ hated rivals, the St. Louis Cardinals. It won't be the Chiefs first stint as a Cardinals club: They were previously a St. Louis affiliate from 1995 to 2004. Still, it’s funny to watch the (lately one-sided) rivalry extend beyond the baseball diamond to entire minor league franchises.

RIP: Russell E. Train, one of the country’s most influential conservationists, at the age of 92. Train helped found the Environmental Protection Agency and the World Wildlife Fund and served as a leader in both organizations. He also helped pass the landmark National Environmental Policy Act of 1969.

Finally
Nick Offerman’s beat poetry tribute to bacon. That is all.