Mitzi Terry looks out her apartment window and loves the view of Chicago’s downtown skyline peeking behind Lake Michigan. She lives close to stores and parks. The most important amenity for Terry, a double amputee, in this Hyde Park high-rise is the elevator.

But Terry has received unwelcoming notices slipped under her door over the last few years. Management said her wheelchair tracked snow in the lobby and scratched up doors. Terry offered to buy runners and a kickplate. She was denied and faced fines.

Terry connected with a lawyer.

“When I heard about this, I found it ridiculous because it’s not like she’s the only one who tracks snow in the winter in Chicago,” said Mary Rosenberg, a lawyer with the disability rights group Access Living. She wrote a letter that said as much and then filed a complaint with the U.S. Department of Housing and Urban Development, or HUD, alleging disability discrimination.

Ultimately, the parties reached a settlement. Terry stayed in her apartment, put a kickplate on her door, received $2,700, and management took fair housing training.

Terry’s housing discrimination complaint was one of nearly 2,000 in the city filed with HUD over the past 20 years under the Fair Housing Act. WBEZ received the information via a Freedom of Information Act request.

In 1968, Congress passed the Fair Housing Act to prohibit racism in the private and public housing markets. It’s an important piece of civil rights legislation passed right after the death of Martin Luther King Jr. — during a time when “no blacks allowed” signs were common in the private market all around the country. Chicago has an ugly segregated housing history that King witnessed when he visited here in the 1960s.

Through the years, more discrimination categories have been added. It’s illegal to deny housing based on race, color, national origin, sex, religion, familial status, and disability. The latter category was added in 1988.

And today, disability is the number one category for housing discrimination complaints in Chicago, mirroring a national trend.

A landlord can’t refuse to rent to someone with a physical or mental impairment. The law also says a landlord has to make reasonable accommodations or changes to make an apartment more accessible — such as fulfilling a request for a closer parking spot or allowing grab bars in a shower.

“People with disabilities are often more vocal and informed about their rights and willing to pursue them,” said Allison Bethel, director of the fair housing legal clinic at John Marshall Law School.

It’s important to note that race discrimination is a close second in HUD complaints.

“Even though the numbers are telling you what they’re telling you about disabilities, I don’t think from that that you can frankly conclude that means that [racial discrimination] is still not going on and perhaps even still number one,” Bethel said.

Lack of reporting is a reason, she said. Also, if someone black is told an apartment is unavailable, that renter may not have any reason to think that race factored. Meanwhile, disability discrimination can be much more blatant even while cutting across racial and socioeconomic lines. People with physical disabilities know it’s discrimination, if a landlord refuses to make an apartment more accessible or flat out says “no wheelchairs.”

Joseph Galvan runs the Midwest regional office for HUD and declined to be interviewed about disability discrimination after several requests over several months. Disability legal experts, on the other hand, say people who file discrimination complaints aren’t looking for a financial windfall. They simply want a home because there aren’t enough accessible apartments in the city.

“We just see that there’s a huge need for housing that’s both affordable and accessible for people with disabilities,” said Adam Ballard, manager of organizing and policy for the disability rights group Access Living. He estimates that maybe 1 percent of all housing in Chicago is accessible.

The Fair Housing Act includes design and construction requirements for multifamily buildings with four or more units built after March 13, 1991, that are meant to make the buildings accessible to and usable by people with disabilities.

The age and cost of Chicago’s housing stock limits the availability of accessible places to live.

“A lot of us are on fixed incomes and we can’t afford units in the buildings that are built downtown. And there are definitely accessible units in these buildings because of the Fair Housing Act but they’re not affordable to us without some kind of subsidy,” Ballard said.

Access Living has received 50,000 inquiries for affordable housing since 2004. In May, the group filed a lawsuit in federal court alleging that the city of Chicago has developed and funded tens of thousands of affordable rental housing units without making sure a significant number are accessible.The city declined to comment on the litigation.

“The problem in Chicago is multifaceted,” said Ken Walden, an Access Living lawyer working on the case. “Our claim is going back three decades. The city failed to ensure buildings, and units it helped fund and administer weren’t accessible to people with disabilities.”

Walden said there’s no master list of affordable accessible housing in the city, and the lawsuit points that out.

Yet, it’s not only affordable housing that’s necessary, but a place to live with dignity.

Ten years ago, Ballard broke both of his knees when he fell out of his wheelchair. His legs were in traction, and he received approval for home health care. But he wasn’t able to enter his home. He spent four months rehabilitating in a nursing home.

“That’s not a place for anyone, in my opinion, but less so a young person in their 20s who has a family. My youngest son had just been born a few months earlier. So my kids had to visit me in a nursing home. It was a dark time for me personally,” Ballard said. “But it hardened my resolve to work on that issue particularly because I understood that for me personally, at that point, the biggest barrier to being able to live the life that I wanted was that there wasn’t adequate housing for people with disabilities.”

Julie Falco’s lift on the wooden back porch of her Ravenswood apartment is a metal box and makes life with multiple sclerosis a bit easier. In 2011, she could no longer use the stairs in the multiunit apartment building and is now in a wheelchair. 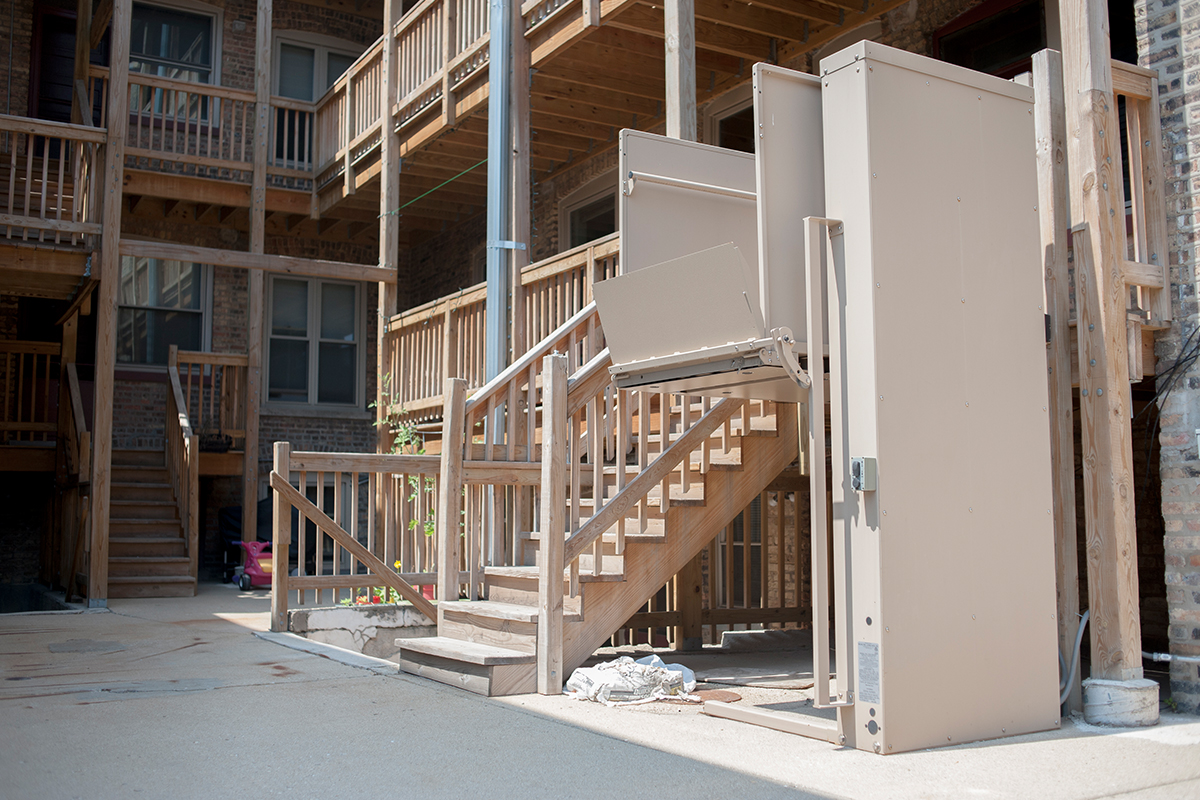 “And they would come and take me down the backstairs and that went on any time I had to go out for an appointment or anything,” Falco said. “One time the fireman, God bless her heart, dropped me down the stairs in the wheelchair, and I had a mild concussion.”

Falco bugged the landlord for permission to install a lift, an amenity the law requires a landlord to allow for someone with a disability. And Falco paid for it with a grant from the city. She contacted Mary Rosenberg, the lawyer with Access Living, who handled the matter without involving a HUD complaint.

But later, the building was sold, and the new landlord took the lift out while fixing the back porches. Construction restricted Falco’s access and then the lift didn’t work. This time, her lawyer filed a complaint with HUD. 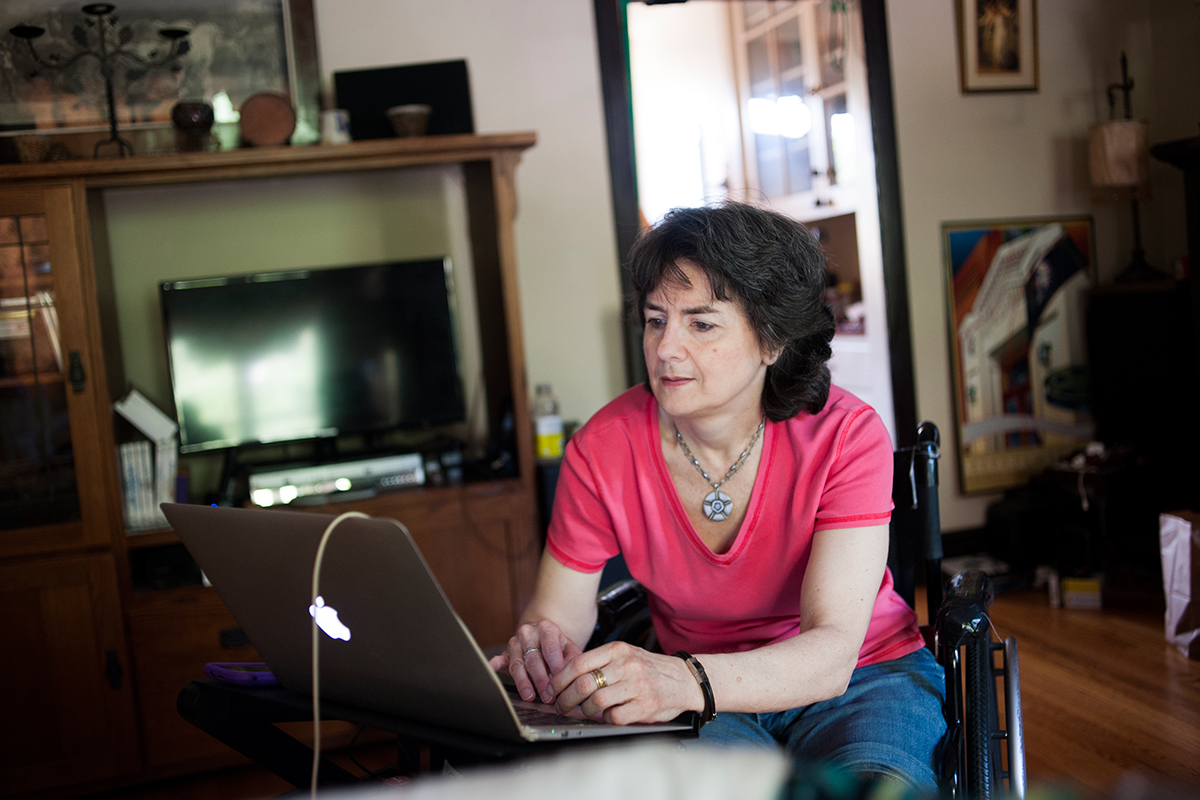 The landlord fixed the lift, and Falco received a confidential financial settlement.

Falco’s grant for the lift came from the city’s Office for People with Disabilities, which is led by Commissioner Karen Tamley.

“It’s the ability for someone with a disability to live in the neighborhood and home of their choice. If you use a wheelchair, your options are limited. You need to find a place where you can get in the front door, use the bathroom and the kitchen,” Tamley said. “We have old housing stock, and single-family homes have steps. For so many people, it allows them to own a home and allows greater choice in terms of where they can live.” Since 1993, the office has awarded 1,110 grants to low-income people for things like ramps or modified kitchens.

There’s also the idea that improving accessibility can help everyone.

“When I was a new mom, I realized ... I needed an elevator, a ramp, more room. I’d like to see us change the narrative about housing  with disabilities,” said Allison Bethel of John Marshall Law School housing clinic. “It’s housing that is more sensitive and useful to the complex needs we have as people in society.”

He lives and owns property in Rockford. One of his tenants paid to have a wheelchair lift put in. Arena took the extra step of paying for it and making sure the lift fit in the building.

“And I did that because they had been there a long time, they were good tenants, and obviously once they have this lift in place, they’re going to stay there. So it was an investment in my property — an expense I had but I also think to my benefit and to the tenant’s benefit,” Arena said.

When Arena provides landlord education, he appeals to them from a business perspective. If they broaden accessibility features in their properties, they create a demand and will always have tenants. And rent money.