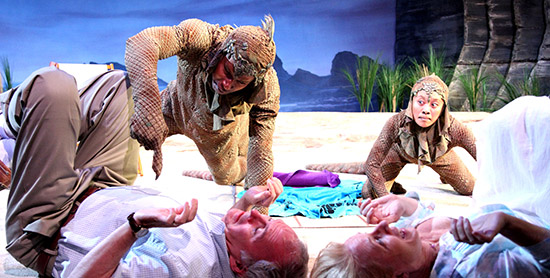 Let’s see, there’s Sleepy, Sneezy, Greasy, Grumpy, Gropey . . . oops, wrong seven. What the four-year-old troupe, The Neapolitans, have in mind are the Seven Deadly Sins. To — uh — celebrate them they’re staging a repertory of seven plays each of which runs about an hour and serves to illuminate or examine one of The Deadlies. To that end, they’ve assembled a wizard collection of playwrights — among them Javon Johnson (Greed), Anne McGravie (Lust) and Michael Hardstock (Sloth) — and equally talented directors such as Andrea J. Dymond, Susan Padveen and Patricia Roeder. The Neapolitans is a group of collaborative theater artists who welcome “unattached” individuals and groups to work with them.

Sentient lizards, oh my! They’re big, they’re shiny, they speak English and they crawl out of the sea and want to have a conversation. What’s next? Move in across the street? Give ‘em an inch and they’ll take over. That’s not precisely the theme of Seascape, the 1975 play which won playwright Edward Albee his second Pulitzer Prize, but it’s definitely there in the evolutionary serio-comedy, especially as staged at Remy Bumppo with minority actors playing the lizards. Artistic director Nick Sandys directs a four-person cast featuring veteran Patrick Clear and Remy Bumppo ensemble member Annabel Armour.

Jitney represents the 1970s in August Wilson’s great cycle of 10 plays about African-American life in each decade of the 20th Century. Set in the Pittsburgh Hill District (as are nine of the 10 plays), it comes at a time when the crumbling old ghetto is being boarded up and knocked down, but also at a time when new possibilities were opening up for African-Americans beyond the ghetto, if they had the guts to stick it out. It’s grist for Wilson’s mill in one of his as-ever-superb portraits of multiple characters engaged in the business of passing the time. Along the way, he works in a powerful father-son story and touches on the heritage of one generation to the next. Unlike many of Wilson’s plays, this one ends on a solemn but hopeful note of continuity, rather than in an explosion of black-on-black violence. The cast is wonderful to behold, as directed by Ron OJ Parson. I’ve seen almost all of them before, many times, but never in performances stronger or more grounded or more thoroughly human than these.