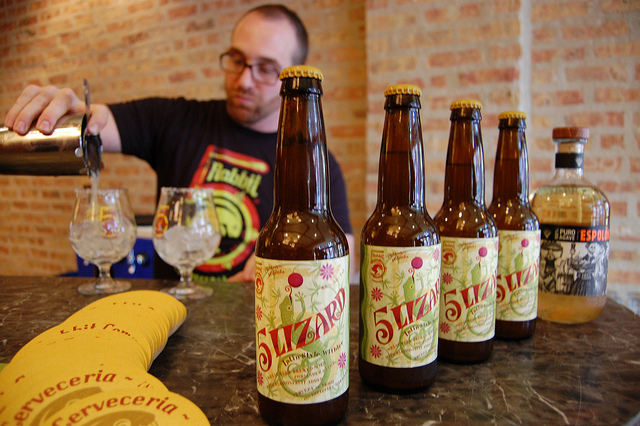 Have you seen the big, new, beautiful, airy addition over at Hopleaf? Well here's the excuse you don't need to head on over there on a Monday night. Edible Chicago presents The Quarterly Carousal, the release party for their fourth annual summer issue (always full of thoughtful writing and gorgeous photographs) plus the local debut of Fiat Lux from Brooklyn Brewery's Brewmaster Reserve series (said to be summery, citrusy, and aromatic) — and yes, it's all going down at Hopleaf. But wait, there's more! Cheese pairings by Hopleaf, Asian influenced food pairings by New Rose Catering, BBQ wings by Grandpa Boo's BBQ sauce, the release of Baking Spice Beets by Stu's Sour (pickles, just for the event) and fun surprises. Admission FREE, including a copy of the Edible Chicago summer issue, first taste of Fiat Lux and food tastings, but RSVP requested.

It's back! Veggie Bingo at The Hideout (your home away from home) this week benefitting the Altgeld Sawyer Corner Farm. As always they'll grill up free hot dogs from Hot Doug's (literally, out front, on a charcoal grill) plus you just might win the Grand Prize: a big bag of fresh organic produce from Irv & Shelly's Fresh Picks (the lovely local food hub). Admission FREE, $2 for each bingo card or $5 for three.

OK, on the other end of the spectrum, break out your cocktail attire for the fourth annual Taste of the Gold Coast at the Sofitel Grand Ballroom, with a silent auction benefitting the Israel Sports Center for the Disabled. Meet and eat from the Sofitel's own Cafe des Architectes' Greg Biggers; Bar Toma's Tony Mantuano; plus over a dozen more local chefs and restaurants and drink Goose Island beer. Admission $120 general, $75 student, and $250 VIP.

This week's theme: beer (if real life was like This American Life); Act Three: Replicale. At the fifth annual Oak Park Micro Brew Review, there will be tastings of over 100 craft beers from over 50 microbreweries (alphabetically, from 3 Floyds and 5 Rabbit, to Widmer and Wild Onion); and 15 of those microbreweries will feature this year's style, Belgian Abbey Single — or Replicale, if you will. They say this is the Midwest's largest zero-waste craft beer festival (and remind you to bring your own reusable water bottle to keep hydrated, which you can refill there) plus the event benefits Seven Generations Ahead's non-profit work to build healthy, environmentally sustainable communities in the Midwest. There will be food tastings from local organic farmers and an after party at Marion Street Cheese Market. Admission $45, only Taster's Choice tickets remain as of this moment; $50 at the door if available.