When Mae Lynn Reyes-Rodríguez was a graduate student in psychology at the University of Puerto Rico in the early 1990s, she learned there were no studies of how many Latinos suffered from anorexia, bulimia or binge eating disorder.

"Eating disorders have the highest mortality of any mental health condition," she says. "We need more research, especially clinical trials with diverse populations, because [right] now we are generalizing all research findings from Caucasians."

"We need to develop culturally sensitive treatments," she says.

That's exactly what self-described "chubby warrior" Gloria Lucas is doing. Her struggle with compulsive overeating began when she was 17. 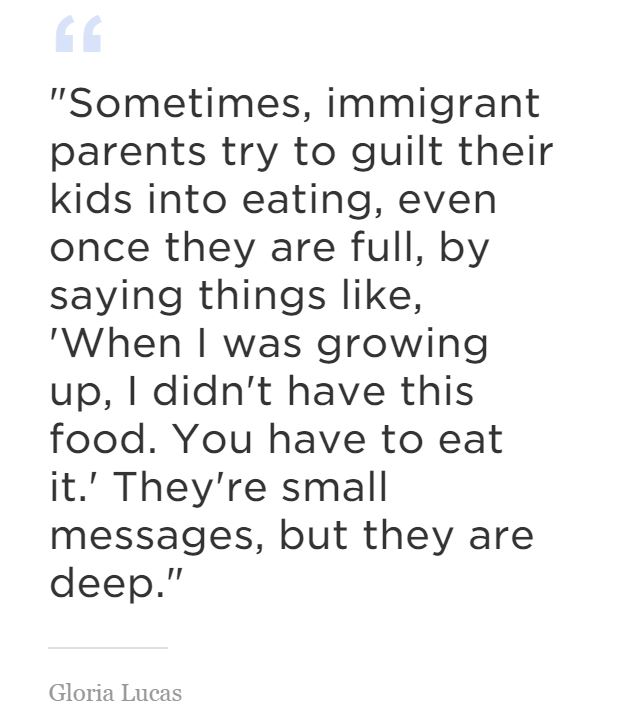 But because talking about eating disorders was taboo in her Mexican-American community, her family didn't know how to respond. "My parents didn't have any clue [about my eating disorder]," she says. "They still don't quite understand it to this day."

Lucas, now 24, says therapy and traditional 12-step recovery programs were not "culturally relevant" for her. Many times, she says, the professionals did not understand cultural factors that can influence eating disorders among communities of color and indigenous and migrant women.

"Sometimes, immigrant parents try to guilt their kids into eating, even once they are full, by saying things like, 'When I was growing up, I didn't have this food. You have to eat it.' They're small messages, but they are deep," she says.

And Lucas notes that women of color can struggle with body image in a culture where prevailing beauty standards primarily value thin, white women.

Lucas founded Nalgona Positivity Pride, a "body positive" site for communities of color. Since July, Nalgona (which translates to "big butt" in Spanish) has hosted a semi-monthly eating disorder support group in Los Angeles for people from diverse backgrounds.

Lucas' work is especially important in a community that has negative associations with mental health treatment. Reyes-Rodriguez says that cultural and language barriers prevent many Latinas from receiving the care they need to recover from eating disorders, and cultural norms may be putting Latina women at particular risk for developing them.

"The majority of immigrant women, and some U.S.-born Latinas, are given cultural messages that they have to eat all the food on their plate," Reyes-Rodriguez says.

In many Latino families, she says, food is also used to comfort children. "These cultural values could lead to losing the self-awareness of body cues to hunger and satiety, and potentially promoting distorted eating behaviors or binge eating disorder — which is one of the most prevalent eating disorders in the Latino population," Reyes-Rodriguez says.

Nalgona Positivity Pride is just one of many initiatives that aim to challenge this false notion. As with Latinos, few studies have been conducted on eating disorders among Asian-Americans and Pacific Islanders. 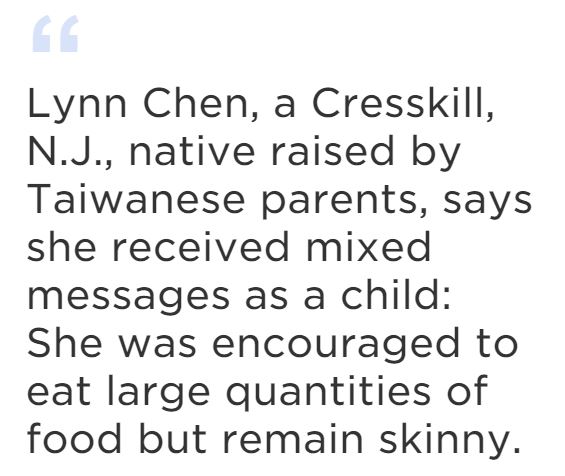 Lynn Chen, 38, wants to change that. She co-founded Thick Dumpling Skin, an organization that aims to "create a community for Asian-Americans to discuss their past, present, and future relationships with their bodies," as the group's website puts it.

Chen, a Cresskill, N.J., native raised by Taiwanese parents, says she received mixed messages as a child: She was encouraged to eat large quantities of food but remain skinny.

Growing up, she struggled with binge eating. During the worst times, Chen, an actress, would have what she called "last supper" days. She'd make sure she didn't have anything scheduled and would begin eating starting in the morning and ending in the evening.

"It could have been carrots and hummus or cookies, whatever was easy to eat. Some days, I was on a set where there were snacks as far as the eyes can see. I'd be eating my feelings all day long," recalls Chen. She wouldn't purposefully purge, but there were a handful of times she began involuntarily throwing up for days.

"I have been binge eating my whole life," Chen says, adding that she also struggled with anorexia after being cast in a soap opera in 2004. "The dieting became anorexia. I'd go through a period of binge eating and a period of starvation."

Chen, like Lucas, hopes to bring awareness of eating disorders to diverse communities. By sharing her stories, she hopes young women can avoid the confusion and pitfalls she struggled with growing up.

She recently went on a five-day food tour in Taiwan. "I warned everyone, my white husband included... 'They're going to want to stuff you [with food]. It's a cultural thing. You're going to have to be OK saying 'no,' " Chen recalled.

She says she felt the tour guide was shaming her for not eating all the food she was served. "I told her, 'Listen, I have an eating disorder. I'm not eating more than I feel comfortable with."