On a breezy Saturday morning in early May, shoppers bustled through the French Market in Lakeview stuffing their bags with brightly colored sweet peppers, plump tomatoes and deep purple eggplants.

A couple of miles down the road, in Lincoln Park, foodies welcomed the year’s first outdoor Green City Market. But here, the pickings were much slimmer: just ramps, asparagus, greens, radishes and some cellared stuff from last year.

How to get the most out of your farmers market

So, with all the recent emphasis on seasonality and local food, why did one market look like it sold imported produce while another reflected springtime in the Midwest?

It really boils down to different market philosophies. But it also illustrates the importance of knowing your market before you shop. The Chicago area will host more than 150 weekly farmers markets this year and they don’t all share the same priorities.

Leslie Cahill, who manages 14 Bensidoun French Markets in Chicagoland, says these gatherings are more about nurturing new entrepreneurs, creating community and presenting unique products. So, she’s not so strict when it comes to local produce.

“For example, I have a farmer who works at my Villa Park French market,” Cahill said. “He’s a wonderful guy and his cousin actually farms tomatoes in Florida. So every spring, he brings up tomatoes from his cousin’s farm in Florida. It’s not a local product, but it’s a personal relationship he’s bringing.”

Cahill said she has another vendor who imports fresh figs from the West Coast. And all she asks for is transparency.

Still, local food advocate Roxanne Junge, who manages the Glenview Farmers Market, worries that some vendors won’t be so transparent.

“Those who purely go to a wholesaler and buy things that are not at all local and they bring them in and they pass themselves as farmers (they) can undercut those who are doing it themselves,” she says. “So, we need to have real farmers at farmers markets.”

Yesenia Mota has managed City of Chicago farmers markets for more than a decade. And over those years, she says, the city has become much choosier about its vendors.

“When we revamped our application processes a few years ago the city really did a 180,” she says. “We threw out a lot of wholesalers. We decreased our number of markets and really focused on farmers and farmer relations and knowing who these farmers are. And it’s amazing with social media, you can really look up a farmer and see what they are growing.” 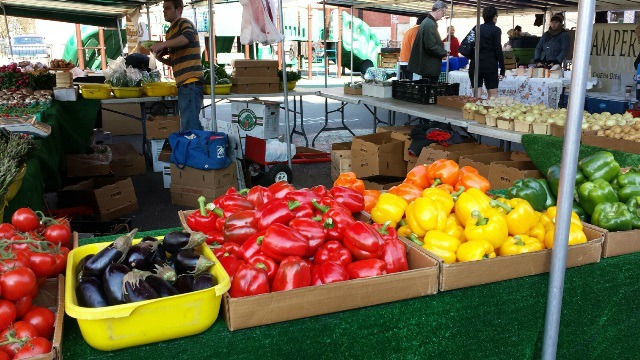 At Green City Market, the process goes one step further. Not only does the produce need to be local. But each vendor must earn and display a specific sustainability certification.

Most markets also allow co-ops or the ability to bring in produce from a neighbor as it’s vetted first.

Then we’ve got the independent farmers markets. These can be located in the city or suburbs. But each is governed by a different set of rules.

And, as long as people are honest, Junge says this diversity can be a good thing.

“In some areas, people recognize unusual fruits and vegetables. And in other areas, they don’t and they won’t buy them,” says Junge, who’s a board member of the Illinois Farmers Market Association. “In some areas, there’s more expendable income and you’ll have higher priced items showing up there. And in other places, there’s lower income. So, its absolutely OK to have different kinds. They fit in what works in that area.”

This flexibility, for instance, allowed the independent Bronzeville Community Market to include decidedly “un”local oranges, bananas, broccoli, grapes and packaged lettuce when it opened in 2008 (it’s on hiatus this year). Bernita Johnson-Gabriel, who helped launch the market, says it wouldn’t have made sense to keep them out.

“Our community sort of fit the profile of being a food desert and so it was important for us to bring in as many healthy options as we could for our constituents,” said Johnson-Gabriel who’s the Executive Director of the Quad Communities Development Corporation. “Some of those healthy fruits and vegetables were not necessarily locally grown. And while we support local businesses, the access to good fruits and vegetables just wasn’t here for us and so we felt the need to sort of make that happen.”

So, why exactly is it so important for some people that the produce at farmers markets be purely local?

“What we are trying to do in Illinois is try to build back our local food systems,” Junge said. “And to do that we have to support the local agricultural products that will ensure more health, social stability and economic stability.”

For Cahill of the French Markets, however, the goals are a little different.

Whatever kind of farmers market you attend this summer, Mota suggests: “Get to know your farmer so you know where your food is coming from.”

And in some case, get to know your market manager, too. That way, you know what you’re buying before you start filling up your bag.

How to get the most out of your farmers market

No matter what kind of farmers market you attend this summer, there are some universal tips that can help make the experience better.