Roman Catholics are not supposed to eat meat on Fridays during Lent. They view it as a small act of penance to honor Christ’s death.

So churches across Chicago and the nation are carrying on a time-honored way to skip the meat, and gather as a community. It’s the Friday fish fry, and it is growing in popularity here again.

One of the biggest and longest-running fish fries in Chicago -- and, volunteers claim, the only one here with a drive-through -- is at St. Ferdinand Church on the far Northwest Side.

“We ask God for his blessing tonight and especially for the people, they will come and will serve,” Torba said, adding it is even more important to serve during Lent. Then he led the group in an “Our Father.”

The volunteers were about to serve nearly 600 fish dinners ... in three hours. And the crowd started lining up 45 minutes early.

St. Ferdinand’s fish fry has been going on for something like 25 years now. Organizers said other churches are coming to them now, asking how to start fish fries of their own. 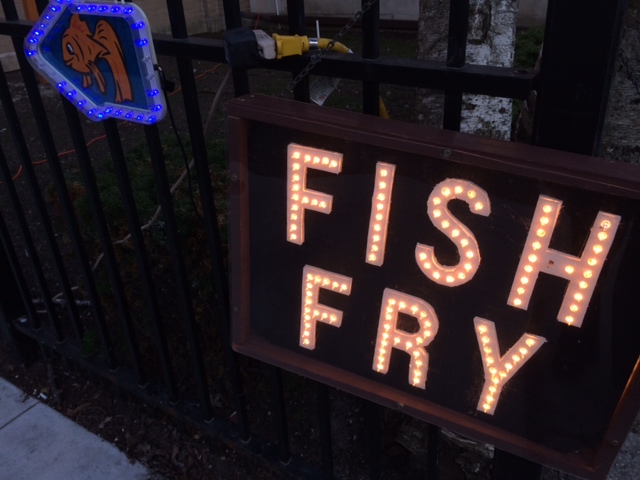 Professor Michael Murphy, director of Catholic Studies at Loyola University Chicago, said church dinners like this were popular in the middle of the last century. Then, the tight parish structure made the local church a central part of life, resulting in women’s and men’s clubs, and many other events.

“The parish was for so many years the place to be,” he said, adding parishes served as a social outlet.

Murphy said fish fries merged theological teachings and practicality. If Catholics could not eat meat on Fridays, they might as well have fish and get together. He said that need to gather is central to the philosophy of the faith.

Murphy said these church dinners waned in popularity in greater Chicago after “older parish things broke down” following Vatican II, combined with the loosening of social structures in the U.S. in the 1960s and 1970s.

But he sees them coming back in style over the past few decades. Murphy said some of his students want to start at fish fry at Loyola. He credited this partly to the “Pope Francis effect,” which has Catholics longing for community again.

“This is not just to come to eat fish, but it is to build community,”  said Rich Wenzl, who has helped run the St. Ferdinand event with his wife Pat for 19 years. Their main goal is not to raise money. They hope to attract people from the parish and the larger neighborhood.

“Our world is very hungry for getting out of our houses and having a place to go that’s correct, and that’s safe, that feels good to be with each other and that we can share ourselves with one another,” Rich Wenzl said.

Pat Wenzl, who is the lead organizer of the fish fry, said it is especially important to recruit young people to volunteer to keep them in the parish and in the faith.

The couple created the process for running the event, and it is pretty much an assembly line. Friday, four men stood over designated fryers. Four women lined up next to each other to dish out fish, coleslaw, dinner rolls and condiments.

Teens stood right outside the kitchen, ready to run out orders to two packed dining halls. The operation is so big now, it takes more than 100 volunteers a night. 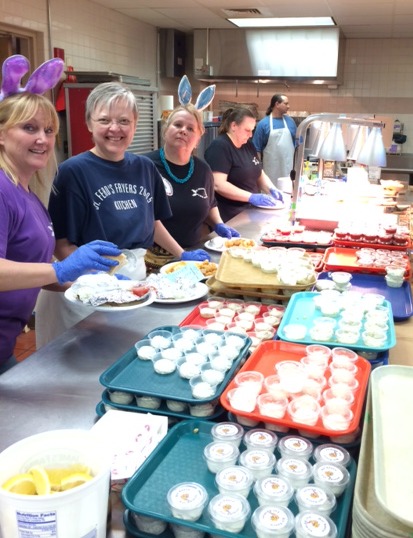 Mary Clemente, who headed the line of women, did not slow down for even a minute ... not until her 4-year-old grandson popped by.

“Give me a kiss, hey, love you,” Clemente told her grandson.

“Grandma, why is people wearing Easter bunny ears?” he asked.

“For Easter,” she said with a laugh.

Another woman chimed in: “Last year was her birthday, we made her kitchen queen.”

Many of the volunteers have stories like this. Volunteering eight, 10, even 20 years is common. Even though it is hard work, Clemente said it is fun, and volunteers become like family.

That sense of community was visible among diners, too. Anne Marie Castiglioni came with her children and her mom. She does not attend St. Ferdinand’s, but lives nearby. She said her son could not wait to see the Easter Bunny, who appears here the last fish fry of the season.

“(He) had the biggest smile on his face to see this guy because he’s known him since he’s been like 3 years old, he’s kind of grown up knowing this Easter Bunny here,” Castiglioni said.

On the other side of the crowded hall, Vincent Clemente -- Mary’s husband - ate fish dinners with their grandson. Clemente’s been a parishioner since he was 1.

“Some people now, they don’t go to church as often,” he said. “Some people that live in the neighborhood don’t attend church, but this enhances the parish community because then they see how much of a community it is, and it may bring them to the church.”

St. Ferdinand’s last fish fry of the season was Friday night. They cannot hold one this weekend, since Catholics are required to fast on Good Friday, depending on their age.
But parishioners at St. Ferdinand plan to keep building community through food. They’ll be back with the fish fry next year.

And up next? A pancake breakfast.

Lynette Kalsnes is a WBEZ producer/reporter covering religion and culture. Follow her @LynetteKalsnes.