(Ed. note - We have asked guest blogger and former Sun-Times Architecture Critic Lee Bey to tell us about the high and low points in architecture from 2000-2009. Lee can be found at leebey.com)

Chicago was enjoying a building boom in 2000. Residential towers sprung up along the outskirts of downtown; townhouses and two flats did likewise, particularly on the North Side and South and West sides.

But there was this persistent buzz behind rumbling of construction equipment: from the graceless concrete residential slab towers in River North to neighborhood housing rendered with Ye Olde Tyme architectural detailing, much of what was being built looked pretty schlocky. And compared to the architectural razzle-dazzle happening in Europe and Asia, our new buildings looked tentative, staid and unremarkable. Chicago had lost its nerve.

Luckily, the city’s architectural fortunes improved during the decade. Trump Tower swaggered onto the urban stage at 401 N. Wabash in 2007, becoming the tallest new building in North America since the Willis (nee Sears) Tower. Once the city finally remembered its heritage of making good-looking tall buildings, we got the noteworthy 62-story One Museum Park, designed by Pappageorge Haymes (on Roosevelt east of Michigan); Helmut Jahn’s 41-story 660 N. Fairbanks; Aqua, architect Jeanne Gang’s 88-story Aqua which is wrapping up at upper Columbus north of Randolph; and scores more.

That might have to hold us for a while, the economy being what it is. So let’s take a look back at the last ten years in Chicago architecture (in no particular order.)

The End of Historicism 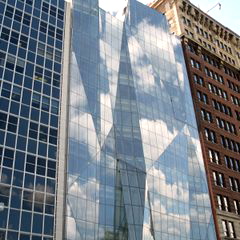 Chicago started the decade with much (too much) of its architecture looking to the past. Think of all the townhomes and two flats with clumsy fake arches and ersatz gabled roofs. By the end the aughts, the city (particularly the Daley administration) embraced a contemporary design aesthetic that has given us a host of the new structures from the torqued glass facade of the Spertus Museum (nicely inserted into the landmarked Michigan Avenue streetwall) to the aptly named concrete and glass residential wonder, the Contemporaine, at 516 N. Wells.

The Demolition of the former Chicago Mercantile Exchange Building

Demolition permits were issued for the old but occupied Mercantile Exchange Building at Washington and Franklin in 2002, preservationists dressed in 1920s clothing to protest the 1927 structure’s demise. The building wasn’t a protected city landmark and was razed. But in the wake of its demise, preservation groups and the city worked out the Demolition-Delay Ordinance which allows the city to hold up issuance of a demolition permit for 90 days while officials and determine if a building can be preserved or landmarked. Yes, it opened four years after the start of the millennium, and stories of the park’s cost overruns are legion. But the 16-acre Millennium Park reactivated Michigan Avenue south of the Chicago; almost single handedly ushered in high-rise development in the portion of the Loop that surrounds the park, and turned what had been a unsightly hole in Grant Park into an internationally-recognized (and publicly accessible) repository of public art, landscape architecture and urban design.

In 2000, the city decided to save Soldier Field by inserting—some would say “stuffing”---a new, ultramodern seating bowl inside the stadium’s neo-Classical skin. Love it or hate it (and there is no middle ground), the debate about the stadium and its controversial new look got people really talking about contextualism, urban design, and public process when it comes to urban planning issues and major civic projects.

The Rise of Sustainable Architecture

Outside of the demonstration green roof atop City Hall, and a smattering of independent projects across the region, ecologically-friendly and sustainable architecture barely registered in Chicago at the beginning of 2000. Before the year ended, the city announced a program to build five affordable sustainable homes, and by the close of the decade, the city would boast 90 “green” buildings as certified by Leadership in Energy and Environment Design (LEED), more than any other US city.

The Illinois Institute of Technology IIT significantly spruced up its world-famous Mies van der Rohe-designed Bronzeville community campus and restored the stellar Crown Hall. Then for an encore, it took a series of vacant lots beneath the Green Line EL on the east side of State Street and gave them over in separate projects to architects Rem Koolhaas and Helmut Jahn. Koolhaas, the Dutch master, designed the McCormick Tribune Campus Center, a building best known by the big silver tube atop its angular pinched-down roof that wraps the EL tracks above it and silences the passing trains. Jahn designed State Street Village, a glassy, smart-looking and contemporary residence hall next door.

Proposed in the last few months of 1999, this 2000 ft sliver of a building proposed for the southeast corner of Madison and Dearborn was the talk of the town in 2000. Designed by Adrian Smith, then of SOM, 7 S. Dearborn was thin and tapered — like a bolt of lightning landing in the Loop. But lightening didn’t strike at Madison and Dearborn, fate did. The project died when the tower’s developer Scott Toberman of European American Realty — who had been sketchy the source of the building’s financing—failed to get any financing at all. Irony alert: Donald Trump offered to partner-up on the project early on, but Toberman refused. Trump would later hire Toberman’s architect to design a sort of cousin to 7 South Dearborn: Trump Tower. The decade was weeks old when the Chicago Housing Authority approved the $1.6 billion CHA Plan for Transformation. The sweeping, 10 year plan was designed to replace much of the city’s public housing with mixed-income neighborhoods. The plan is unfinished and behind schedule and much of what has been produced is safe, predictable architecture. But seeing the big housing projects come down at such rapid pace — particularly Robert Taylor Homes and Stateway Gardens along State Street between 35th and 55th---forever changed the city’s fabric. The September 11, 2001 terrorist attacks, particularly the horrific collapse of the New York’s twin World Trade Center Towers, highlighted the vulnerabilities of the built environment. Chicago’s Trump Tower, which was proposed as a world’s tallest building, shrank in size at developer Donald Trump’s behest during the attacks (a meeting about the Chicago project occurred the morning of 9/11.) Bollards and barriers appeared throughout the Loop to thwart terrorists’ ability to ram vehicles into buildings. Architecture critics and others openly wondered if tall buildings had become the new target for terrorist attacks. But the anxiety lessened as the decade progressed and within three years of September 11, Chicago was again proposing tall buildings, such as”¦

This unbuilt 2000ft skyscraper’s tale is as twisty as the proposed building’s drillbit Santiago Calatrava-designed shape. Developer Christopher T. Carley proposed the building in 2005 as the Fordham Spire, as a hotel/condominiums structure topped by a broadcast tower. When Carley couldn’t get financing developer Garrett Kelleher, of Ireland’s Shelbourne Development Group, Inc. took over the project a year later, renaming it the Chicago Spire. The thin tower gained some girth, but lost its elegance, under Calatrava’s redesign for Kelleher. City officials balked and a re-redesign put back much of what was lost. Construction began, but in late 2008 the project’s financing collapsed and construction was suspended, leaving a circular hole in the ground. The decade closes as Kelleher seeks to work a deal to bring in trade unions — and their ability to loan from their pension and life-insurance funds—as potential new cash investors.