George Stephanopoulos was only 35 when he left his post as a senior advisor to President Clinton, his rolodex full of contacts and his head full of political insights. He didn’t know what he wanted to do next, but he knew he was wrung out from his time inside the D.C. bubble.

“White House years are dog years, multiplied,” he says. “I knew that in order to feel my age again, I had to start a different career.”

Today, Stephanopoulos is the chief anchor for ABC News, a co-anchor of ABC’s Good Morning America, as well as the host of ABC’s political interview show This Week. In this episode of Here’s The Thing, he talks to Alec Baldwin about another prominent TV host, Brian Williams; the prospect of a Bush-Clinton presidential race in 2016; and how he’s learned to be himself on national television. 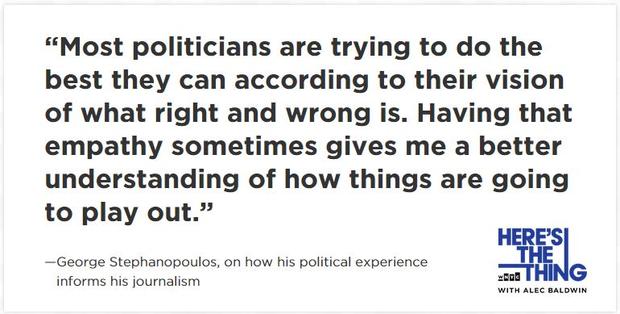