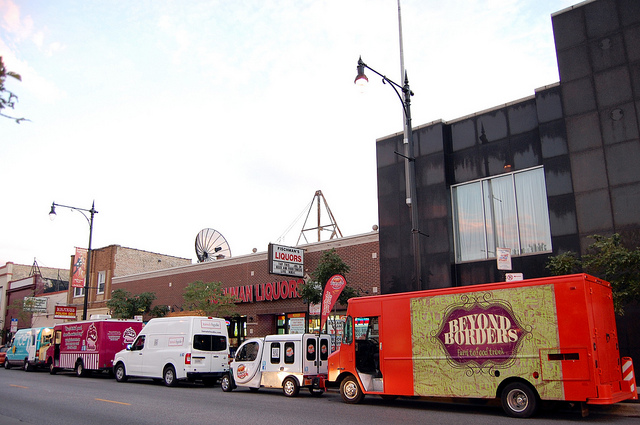 Is Chicago's Jefferson Park the next Wicker Park-Bucktown? It could be, if 45th Ward Alderman John Arena's big plans work out.

Arena cast the only vote against the controversial new food truck ordinance, approved by the City Council Wednesday. "I think restraint of trade is what this ordinance serves up,” he said just before the vote. “A brick-and-mortar restaurant lobby got a hold of it and it was stuffed with protectionism and baked in the oven of paranoia."

I attended and live-tweeted the hearing, which you look back at starting here.

Ald. Arena likely meant the cost of new required GPS and doubled fines for all. Yes, food trucks can now cook on board, but at what cost?

The mystery substitute ordinance was finally posted on the City Clerk's website after the vote, so let's take a moment to talk about what it says. What you won't find in there are any details on the new GPS system — like cost — or the new food stands — like locations. The new ordinance was effective immediately except the new doubled fines, which take effect within ten days.

As expected, the existing 200-foot rule still stands, but has been clarified, meaning a food truck can't park within 200-feet of a restaurant’s street-level principal customer entrance. So no more questions about how to measure for a highrise or pedway restaurant. But food trucks can now serve within 200 feet of a church, school or school playground while school’s in session, which were all previously banned.

And, as added in the committee hearing last week, food trucks can't run from 2 a.m. to 5 a.m. or on vacant lots — or evidently on lots of vacant buildings, which I discovered on careful reading of the ordinance. Food trucks can run within 200 feet of a restaurant, between midnight and 2 a.m. — for now.

But back to the Northwest Side. I spoke with Ald. Arena after Wednesday's meeting to discuss this calzone of protectionism and paranoia. Here's some of what he had to say.
On why he voted against the ordinance

“Like I said, it's restraint of trade. [Rich] Melman can plunk down a million bucks to open a restaurant anywhere. But that’s not how small guys operate. This ordinance favors big guys with big bucks who can withstand the losses.”

“Glenn Keefer’s a guy who’s got more money than ten people I know. That’s who I think we’re competing with. Keefer wants to degrade the industry and talk about where they’re going to go to the bathroom.”

“If I’m taking my wife out to a steak dinner, I’m not going to say, ‘Sorry hon, we’re going to a food truck and eat on a park bench instead.’”

“The big guys say you can just jump on a truck and start slapping down burgers. Well, I just think, ‘You’ve got to be kidding me, right?’ This is coming from a powerful lobby.”

“You’ve got to give food trucks one or two days downtown for lunch. If you don’t give them that base they’re going to fold. These are business owners. A lot of the ones I’ve talked to have between six and 15 employees.”

“I can say, 'Come up to 45th ward.' But why don’t they do that with the bricks and mortars? It’s because I don’t have the density you have downtown — and you need to be there when people are eating.”

“There’s a market up here for specific times, but there’s no lunch crowd. It’s not going to make your operating costs.”

On what he heard from the other aldermen

“A lot of aldermen said yes, it’s restrictive, but it’s a balancing act and we’re giving them the ability to cook on the truck. I say, yeah, we give them that ability but we restrict them. We’ve tailored the industry to the big guys, not to the little guy whose bread and butter depends on how to figure those things out.”

“Instead of looking to California, all I heard was ‘Boston, Boston, Boston.’ They have like 30 food trucks, but even there the restriction is like 50 feet.”

“If you serve a bad sandwich it’s only 250 bucks. Something’s upside down there.”

What about the food truck nights at Fischman's?

“Fischman’s is on the block where my ward office is. It’s the kind of innovation we want to foster. It’s brick and mortar bringing in new business. Before this the sidewalks were barren. Gus had to beg food trucks to come out the first time. Now they’re scheduled through September.”

“I invite food trucks up. I’m going to open up city lots to jamborees. We’re going to celebrate. But I’m single family homes. I’m not highrise office buildings. The point is, why not give them a chance to operate and expand opportunity?”

“I’ve been to Austin and Boston. In Austin, they have cupcakes and tacos in a cone, wonderful corrals with picnic tables, a planter or two, and folks playing guitar. It’s a whole experience.”

“Every food truck is welcome in the 45th ward. We're happy to help business innovate. I think we can create jobs this way. Tonight we’re having an art opening in my office.”

So when are you opening these food truck corrals?

“We’re trying to plan for the beginning of September. I thinking right across from the Copernicus Center. There’s an unimproved lot — the city owns it. We could put up fencing, park benches. It’s steps from the Jefferson Park terminal.”

But the new ordinance says no food trucks on vacant lots even with the permission of the owner. What happens if the owner is the city?