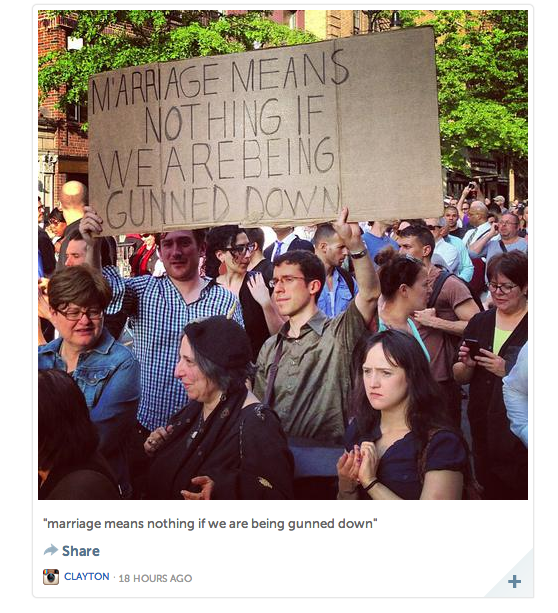 Sometimes, there are reminders. Indications that, yes, the arch of justice bends... and sometimes breaks.  Here we are, poised maybe before the queer equivalent of the Dred Scott decision at the Supreme Court (if anybody was listening to Justice Ruth Bader Ginsburg at the University of Chicago law school a few weeks back, you know the court’s rulings on DOMA/Prop 8 are not going to be Brown) and hate—individual, societal, institutional—can still rear its gnarly head and wreck a life or two or three.

*Earlier this month, a Texas judge enforced a so-called "morality clause" in the divorce decree between Carolyn Compton and her ex-husband, effectively destroying her current same-sex relationship. How’s that? Well, the clause, which is pretty common in Texas divorces though rarely enforced, demands that Compton—a grown woman—not be allowed to have anyone she’s dating or intimate with and who is not related by blood or marriage in her home after 9 p.m.

That’s right: the judge gave Compton, the mother of two, a curfew—and essentially forced her partner of three years, Page Price, to move out of the home they’ve shared. Why? Because the state of Texas’ laws not only ban same-sex marriage but affect collateral legalities, such as power of attorney, child custody, etc. In other words, Texas laws dictate pretty much every aspect of their private lives. The demand for the enforcement came from Compton’s former husband of 11 years, a man who’s been stalking and harassing her enough in the last few years to have earned a protective order and a guilty plea for criminal trespassing.

*Then there’s the case of Kaitlyn Hunt, a Florida high school senior who’s been charged with "lewd and lascivious battery of a child 12-16 years old." The story is best told by Hunt’s mother, who started a Facebook page in her daughter’s defense:

"Voted the student with ‘Most School Spirit’ by her peers, Kaitlyn was an active cheerleader, a basketball player, a camp counselor and cheering coach, and a medical assistant training to join the nursing program at Valencia College after graduation. She looked forward to a career helping others and a memorable final year of high school. At the beginning of the school year, Kaitlyn made friends with a 14-year-old freshmen girl in Sebastian River High's IB program who played varsity sports and took classes with upper classmen. The girls were peers in the same social circle, and as happens every day high schools across America, their friendship eventually developed into more. In September, shortly after Kaitlyn's 18th birthday, the girls began dating, and they eventually expressed their affection for one another in intimate ways.When the girls' basketball coach found out that two of her players were dating, she kicked Kaitlyn off the team and informed her girlfriend's parents that their daughter was in a same-sex relationship. The parents then conspired with police to entrap Kaitlyn and press charges.The police recorded a phone conversation between the two girls, who today are 18 and 15, in which they discussed their relationship. Kaitlyn was arrested and charged with two counts of felony lewd and lascivious battery on a child 12-16. Kaitlyn's girlfriend denies that Kaitlyn ever pressured her and is adamant that their relationship is entirely consensual, but her parents are out to destroy Kaitlyn's life. After two separate judges ruled that Kaitlyn could finish her senior year with her peers, her girlfriend's parents appealed to the Indian River County School Board, who expelled Kaitlyn and sent her to the alternative school."

One great thing going for Hunt: Her mom. Family support can make all the difference. But should a high school girl—a girl who was obviously a good and popular student—ever have to go through something like this?

*Lastly, there’s New York City. One of the safest, most accepting places for queer people. Or is it? Last Saturday, a fool with a gun put a bullet into Mark Carson’s face and shot him dead, just blocks from the iconic Stonewall Inn, site of one of Gay Liberation’s most well-known freedom riot. Let me be perfectly clear: this happened in the heart of Greenwich Village, where the sight of same-sex couples holding hands and being affectionate is as common as ... well, opposite sex couples. Fifteen hundred people marched in the Village Monday night chanting Carson’s name. But later that same night, Dan Contarino, another openly gay man, was bashed at Avenue D and 4th Street.