Devon Neff used to live in an apartment at Marina City, the honeycomb-like high rise overlooking Chicago’s downtown. During the winter, he would often admire the frozen Chicago River … until something unusual would happen.

“I would wake up in the morning, see this nice sheet of ice on the river,” he says. “Come back in a little bit ... There it is, all broken up.”

Devon got on his computer and ransacked the city’s website, trying to find out when icebreaking took place. Surely, in an era of reality TV shows about crab fishermen and Alaskan truck drivers, a process as technically impressive as icebreaking on the Chicago River deserves its own Twitter account. Or possibly even its own app — complete with dates, times and a live video feed?

Alas, Devon’s search turned up zip, so he sent us this question:

What prompts the strategic icebreaking on the Chicago River? And is there a schedule so I can watch?

The ‘why’ behind icebreaking

The number one reason ice is broken on the Chicago River is to keep it navigable so emergency boats can get through. Chicago Police Department, Chicago Fire Department and U.S. Coast Guard boats need to navigate the river during rescues when, say, people walk onto the frozen surface of the river or fall into it. Fire Department boats also need access to buildings; on occasion, a building along the river bank will catch fire, and those boats can pump water onto the blaze.

Icebreaking is irregular, prompted by need, and sometimes by emergency. Commercial vessels rarely ply the Chicago River in winter, but when they do need ice broken, they have private tugboat companies like Calumet River Fleeting do the job.

The city of Chicago and the Army Corps of Engineers handle the rest of the breaking. The city uses specially outfitted boats (really mean machines, which we will get into), while the Army Corps uses altogether different methods.

Bubble your troubles away

At the mouth of the river, near Navy Pier, sits the Chicago Harbor Lock, basically a pair of floodgates that separate the Chicago River from Lake Michigan. It’s operated by the Army Corps of Engineers. Any boat that wants to enter or exit the river has to pass through this lock, so the gates must stay ice-free. 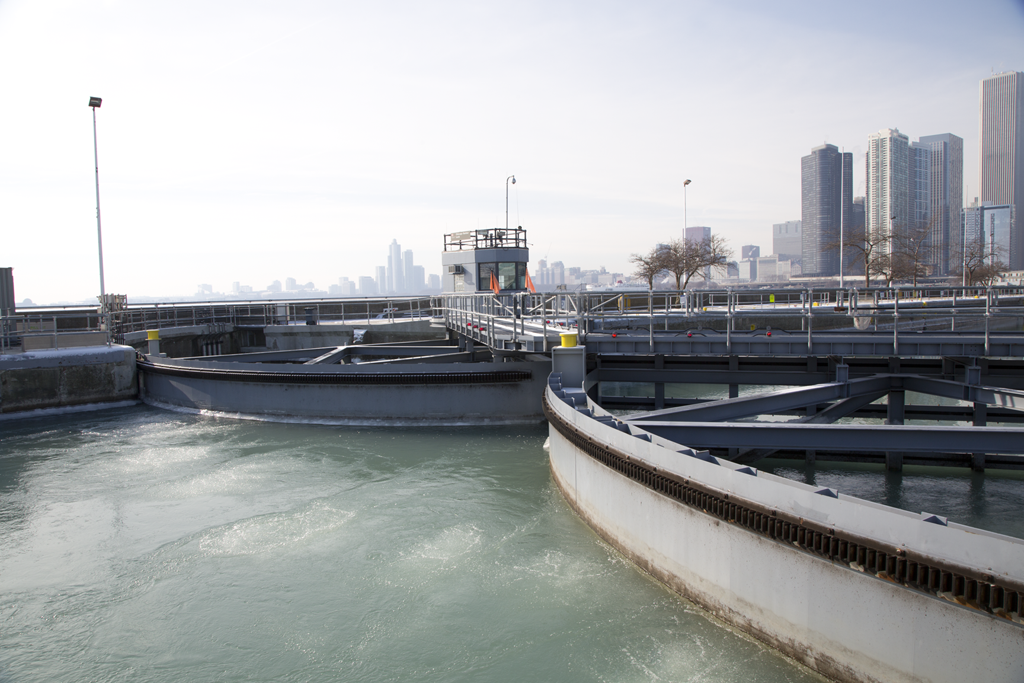 “If all of a sudden we get a barge or one of the fire boats needing to get through, and we can't open the gates, then we’re all in trouble,” says Bob Ojala, Navigation Facility Supervisor.

Ojala says that when temps drop around freezing, the river will start to make what’s called skim ice. “But once it gets down to 15 or 10 degrees,” he says, “it’ll make, overnight, two or three inches of ice.”

So, the Army Corps has installed an air compressor and system of bubblers near both of the gates. The rising bubbles churn the water and break up ice as it forms. When the bubblers aren’t enough, though, Army Corps workers break out 10-foot long metal poles with chisels on the end and start piking away.

What’s it like getting medieval with the ice when it’s -20 degrees? 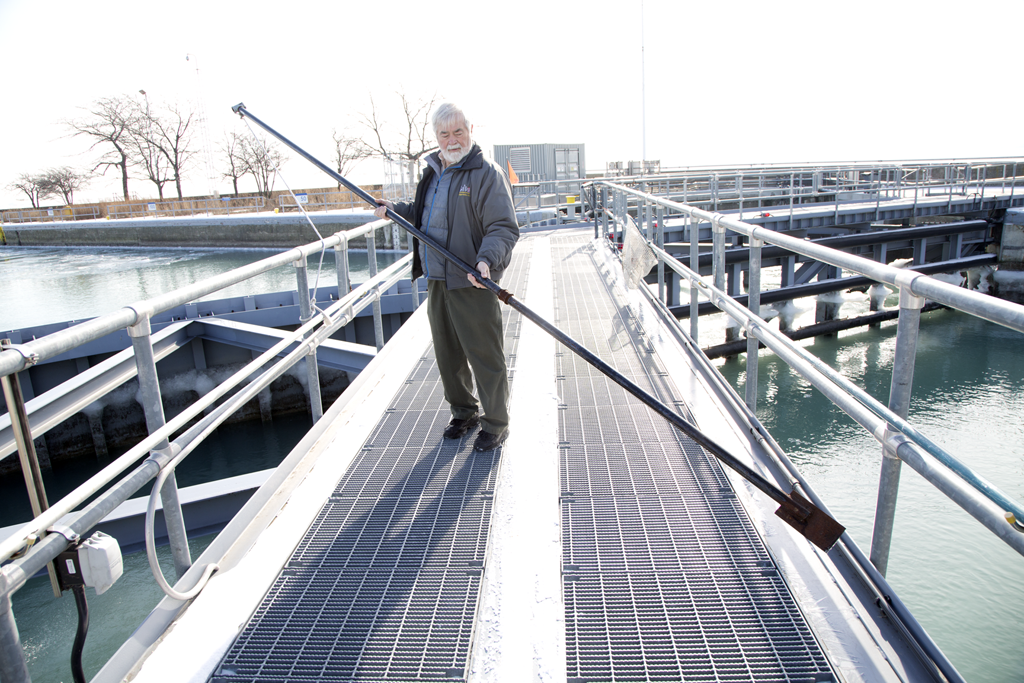 The only ships on the Chicago River that could technically be called icebreakers are owned and operated by the Fire Department and the Water Department. That term refers to heavy boats — often tugboats — with bows that are cut away at a 45-degree angle. This feature allows icebreakers to ride up onto ice, and then crash down through it. The busted ice is then sucked under the boat and then churned in the boat’s wake.

Icebreaker. The word alone is enough to make any boat nerd salivate. In fact, you’d imagine there’s some sexy trade magazine dedicated to icebreaking boats. Well, there isn’t, so we made one up. 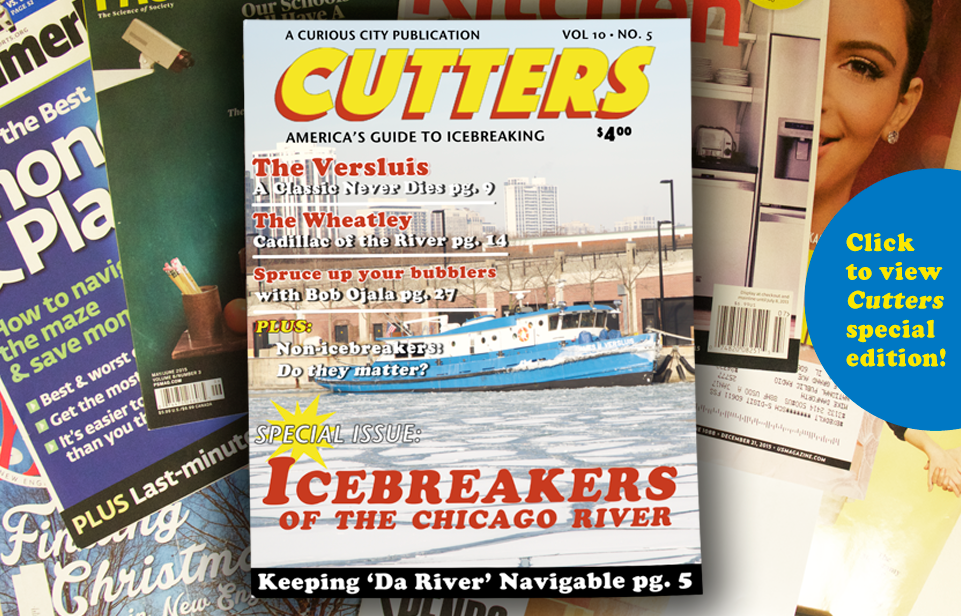 The Fire Department’s icebreaker, the Christopher Wheatley, was built in 2011 at a cost of $9 million. She’s able to handle up to a foot of ice, and she serves as the Fire Department’s “heavy response” boat. Essentially a floating ambulance-slash-fire truck, The Wheatley has a triage room, a diving platform, and four water cannons that, together, can pump 15,000 gallons of water per minute.

“It’s pretty cool,” boasts Bill Schmidt, the Wheatley’s captain. “They pay us to play with a big toy over here.”

He’s being facetious, of course. Schmidt’s been with the Fire Department for a decade, and his job can be stressful, requiring him to be on call 24-7. Last year, the Wheatley was sent on more than 260 water rescues, 18 of which were for people chasing their dogs out onto the frozen lake.

“This is the baby that’s gonna get there,” he says. “They built her well for that.”

The Fire Department is usually reluctant to send its “baby” out to break ice, not just because she’s a pretty boat, but also to keep her in top condition for when she’s needed. Usually, the Fire Department lets the Water Department send out their icebreaking tug, the James J. Versluis, to break up ice. 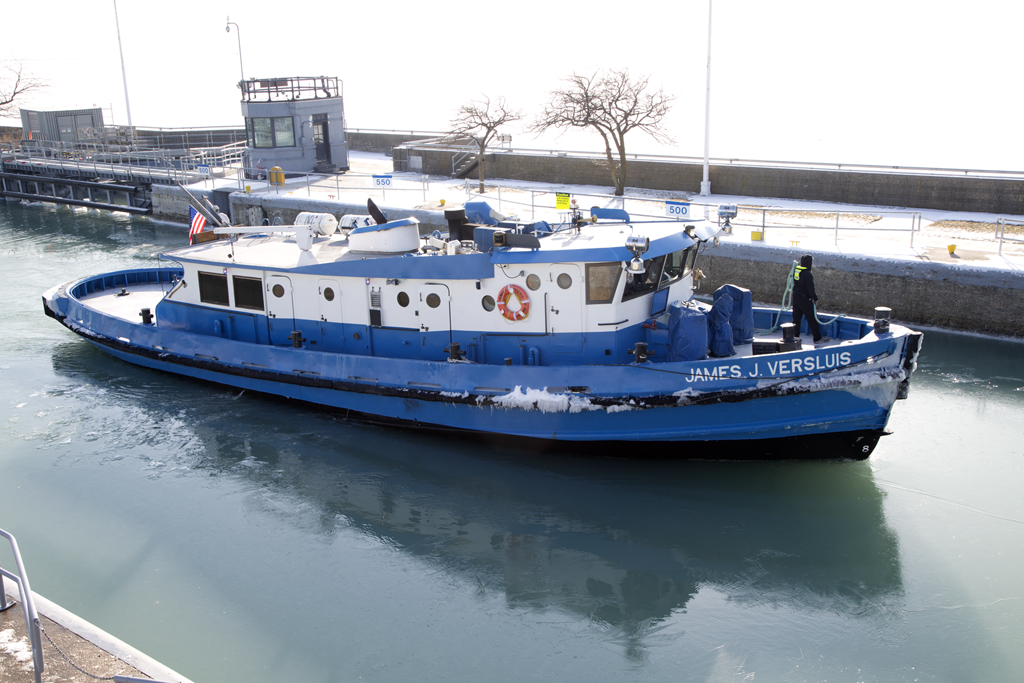 The Versluis, a 90-foot, blue-and-white tug, can move through 18 inches of ice, and she’s the boat you’ll most often see breaking up the river. In addition to helping out the Fire Department, she also moves city construction barges, and keeps the inlets around Navy Pier clear of ice. Her biggest task though, is servicing the water cribs.

Located a few miles offshore on Lake Michigan, the city’s six water intake cribs provide Chicago’s drinking water. Out on the lake, however, the Versluis sometimes runs into patches of ice between eight- and 10-feet thick. How does a boat designed to cut through 18 inches handle that much ice?

“Backing, ramming, backing, ramming,” says Bill Schmidt, who worked aboard the Verslius for 27 years before he joined the Fire Department. “A 40-minute run to 68th Street crib at times would take me four hours,” he recalls.

When can I watch?

You may get lucky and catch the Versluis in action, but unfortunately there is no icebreaking schedule, and it doesn’t look like there will be. Weather conditions drive the decision of when to break ice — not a calendar. That means the arrangement between the Water Department and the Fire Department is informal.

So why does the maintenance of such an important waterway seem so casual?

Everyone we talked to for this story — from Captain Bill Schmidt, to the Army Corps’ Bob Ojala, to the guys at Calumet River Fleeting — are all second-, third-, or even fourth-generation mariners, and all of them seem to know each other on a first name basis. These custodians of the Chicago River work together to ensure the river remains navigable. At times, the Chicago Fire Department will even call up commercial tugboats to help with water rescues. There’s more harmony and cooperation than you’d expect from three separate government agencies.

“We’re all kind of doing our own thing, but it all fits together,” says Ojala.

The lock is closed for maintenance through March, which means this winter you won’t be seeing much ice-breaking on the river, or boats in general. However, if you take a short walk down the north side of Navy Pier, you might catch the city’s two icebreakers, the Versluis and the Wheatley, moored next to each other by the Giardine Water Plant. You might even spot Captain Bill Schmidt, although he could be in the boat cabin, reading a book as he waits for the next rescue call.

More about our questioner, Devon Neff 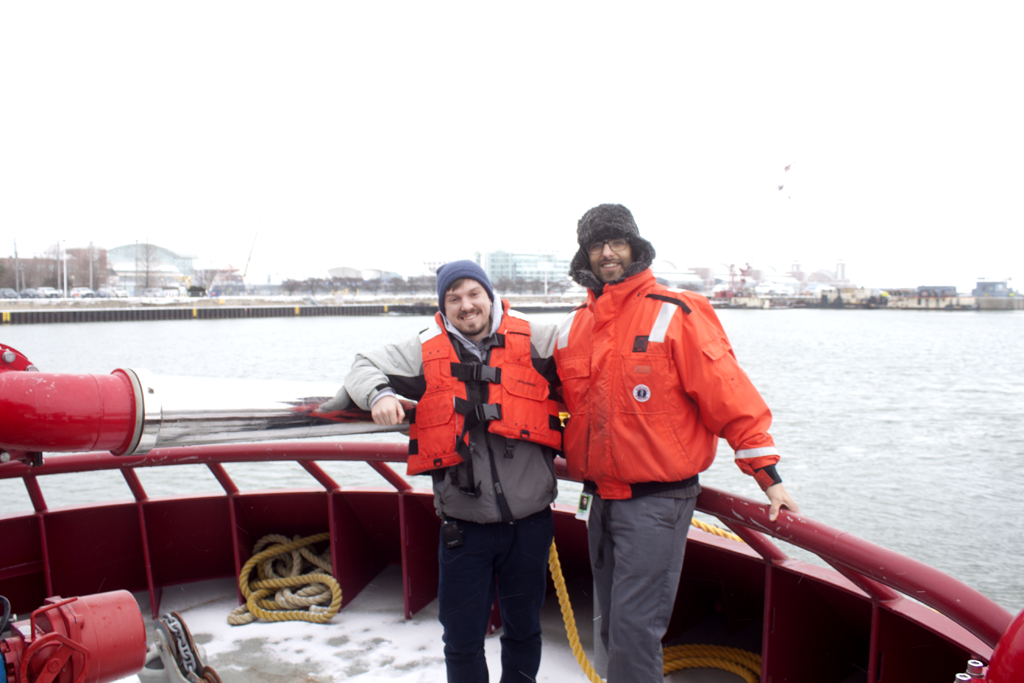 A self-described “water guy,” Devon lives and works in downtown Chicago, where he gets to see the Chicago River everyday. He’s such a geek for all things maritime that he previously inspired another story for Curious City: Which is more important to Chicago: Lake Michigan or the Chicago River?

While Devon is disappointed that there is no icebreaking schedule, he did accompany us for an icebreaking tour with Captain Bill Schmidt aboard the Christopher Wheatley.

“If nothing else, at least I have that,” he says. Schmidt took us out on a Friday morning, as snow fell on the river’s icy surface. The ice made a moaning, groaning sound as it broke against the hull.

Devon holds out hope that maybe the Water Department will start tweeting when they send out their icebreaker: “We have a River Walk, why not let people know when they can use the River Walk to see a neat process?”

A spokesman for the Water Department says this is highly unlikely.