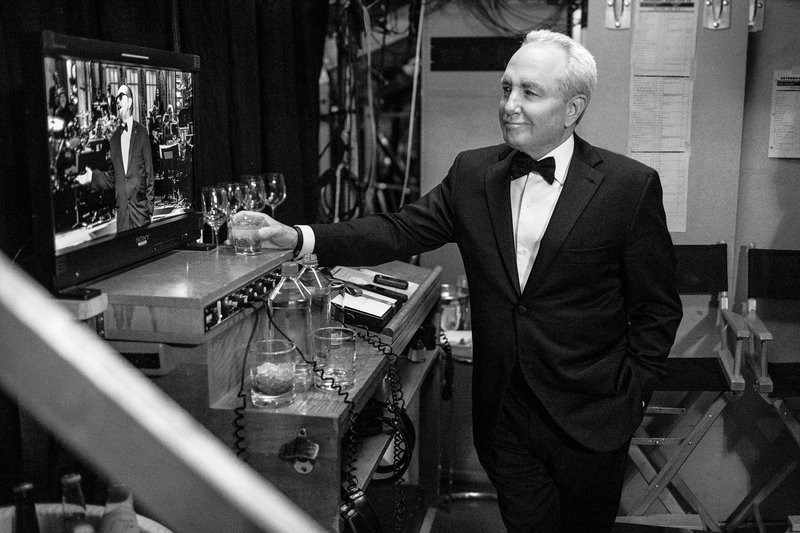 It's Oct. 1, two days before the season's first Saturday Night Live goes on air. Guest host Miley Cyrus is rehearsing, rumors are flying that presidential candidate Hillary Clinton is going to be on the show — and executive producer Lorne Michaels is in his office overlooking studio 8H, worrying.

"I'm worried about three different film shoots which are going on, I'm worried about some new [Weekend] Update stuff in terms of its set, and how it looks," he says. "I'm worried about how various cast members will perform. And also I'm always worried about length, just how long we're going to be and what I'm going to have to cut to make it work — 'cause sometimes you cut internally [in a sketch] and pick up pace, and sometimes it's just a bloodbath.

"It is a long list. These are the things that keep you up at night — but fortunately I work at night, so it's not so bad."

"Over the summer, when people have those three months off, most of the encounters they have with people are really positive — people tell 'em how much they liked the scene they were in, or what things they liked," he said. "When you come back into a fairly brutal regime — regimen, rather — you realize, 'Oh, it's way harder than that.' ... It's like childbirth — you just remember the baby."

Michaels spoke with Greene about the upcoming season — you can read about that here — diversity in comedy, and what it's like shepherding so many comedians into TV careers.

It started on a website or podcast, and then it was an editorial in The New York Times. And you go, "No, we've been breaking those barriers from the very beginning."

But I understand perception is everything, and I live in a world of perception, and if that was how we were perceived then it had to be addressed, which is what I did. But it didn't come from any place of intent or meanness; it came from looking every year for the best people we can find.

On the challenges of finding the right people for the cast

The intent is always just to find the most talented people there are. We go all over the country. And more and more, people know how to find us, so it isn't like we don't hear about it.

You do rounds of auditions in New York, LA, Chicago, other places, Toronto sometimes, and then you narrow it down to 50 or 60, and then you bring in 30 or 40 and put them in this studio. ... You can play baseball, but can you play baseball in Yankee Stadium? It's a different set of challenges. And if they're not ready yet ... they just flail. And you're not doing anybody a favor by putting them up there before they have the poise and the strength, and of course the talent. ...

Right now we have four African-American cast members. It wasn't a plan, do you know what I mean? Keenan has been here, I think, he was here two years before I was here. Chris Rock called me about Leslie [Jones] ... said, "She's the funniest person, or one of the funniest people I know, and she's either going to end up working for you or working for AT&T, so." And Leslie was 46 and was not in any way what I was looking for, but when I saw her and she just destroyed — and she's, aside from being incredibly funny, she's a wonderful person, and lovely — and you go, "Right, OK, you join." ... If they have it, it's undeniable. ...

It really helps if they've had experience on stage. By the time we get them, they should have had three or four years minimum of being in front of an audience, so that that part doesn't fall apart when you add a script that is ever-changing, lights that are blinding you, cameras that you have to pay attention to, live audience, other cast members. That's a lot to integrate to be able to soar and be brilliant.

On making the hard decisions for the show I think the role of being in charge — when you're in charge, you have to take responsibility for all of it. And that means you're going to hurt people's feelings. But the only way you can sort of live with yourself — or at least if you're brought up in Canada, live with yourself — is that you have to believe that you're doing it to put on the best possible show each week, and that nothing is going to get in the way of that. And that there's next week. And that it may be hurtful, but it was the right decision at that time.

On how comedians develop on the show

It's about talent, and talent needs to ripen. And the only way it ripens is it works constantly, and it fails, it takes chances, it gets knocked down, it breaks through. All of that is part of the process, and if you don't have the room to do it, and you've never done it before you've gotten here, it won't matter how talented you are.

And then you see them become the person that, later on, people always go, "I always loved so and so." And you go, "No, no you didn't — there were like three really rough years that you had, at best, mixed feelings."

On the sense of pride he feels watching cast members improve

People get better. They discover the role. Living through it on Update so many times, where people go, "Well, we don't like that." And you go, "Yeah, I know, I know, that's gotta be really hard for you — but we're going to pretty much stick with it, and then you'll sort of see whether you still like it."

There's never been a cast that anybody liked at the beginning.