This Curious City question starts with a kind of double-barreled observation: Even without a budget, Illinois is still collecting taxes.

Let’s unpack that: Without a budget …. Illinois has not had a budget since June 2015. That’s more than nine months.

But it is true: ... Illinois is still collecting taxes. In fact, we’ve chosen to answer this question during the very week that tax returns are due.

So the question itself, about our tax dollars, is especially timely:

Where do those dollars go, and what, if anything, are they funding?

Chicagoan Jon Quinn, who posed the question, has heard stories about social-service agencies not getting paid and people falling through the cracks. (WBEZ has reported on this for our series Caught in the Middle.)

True story: Jon has a master’s degree in public policy. But the Illinois budget impasse raises questions for him that aren’t in textbooks, questions like: How does it work? Where is our money going?

Actually, it’s going to be kind of fun — although you may be a little angry by the time we’re done.

1. What is a state budget, anyway? How does it work?

In a way, it’s like a household budget; your budget is a plan to match your bills to your income.

As you may have experienced, not having a budget is NOT the same as having no bills or zero obligations.

And if you have other adults in your household, you might have fought about how to make that work. Does one of you take another job? Do you cancel your vacation?

One way to look at the state of Illinois is: You’re living with about 10 million other adults. That’s too many people to duke out your spending priorities with directly. So, you elect people to have those fights for you.

The mechanics work like this: Every year, the legislature and the governor fight it out, until they agree on appropriations — how much to spend on what this year. An appropriation is a legal decision to spend money on something. When you add up all the appropriations, that’s the budget.

Except, this year our elected officials did not fight out those priorities.

“This is about the worst way you could really operate a government,” says Laurence Msall, president of the Civic Federation — a nonprofit funded by business leaders, that looks at local and state budgets.

He adds: “You could basically say, ‘Instead of having a budget, we're just going to have it on autopilot.’”

And on autopilot, we're spending billions more than we're taking in.

“The eventual tax increase and burden on the citizens,” Msall says, “is far greater than a reasonable budget that anyone could have proposed for the state of Illinois.”

Meaning: This will end up being much more expensive than any budget we might actually make. For instance, when we fall behind on our bills, we pay interest.

2. How can Illinois spend money without a budget? And, what’s it spending that money on?

There are three different ways we’ve ended up spending money this year.

First, there are continuing appropriations — a fancy way of saying “money we already passed laws to spend, no matter what.”

When we borrow big chunks of money (say, to build roads), a law gets passed, promising to make the payments every year, no matter what. Otherwise, no one would loan us money.

There are other continuing appropriations, too, like payments into the pension systems for state workers and teachers.

Second, we did make one big appropriation this year, for public schools. State money is a huge part of school budgets. If this hadn’t happened, schools wouldn’t have opened. Elected officials weren’t about to leave themselves on the hook for that.

Number three is the biggest: money we’re spending because federal courts say we have to.

Over the years, public-interest groups have taken the state to court, to force it to comply with various federal requirements, like the Americans with Disabilities Act. If complying costs money, that’s got to happen, budget or no.

Mostly, the resulting arrangements are called consent decrees. The biggest one, by a lot, covers the state’s contribution to Medicaid.

Second-biggest for court-ordered spending: salaries for state workers. Courts have ruled that when employees show up for work, they have to get paid. Elected officials have not taken the step of laying them off. That’s why there’s someone at the Secretary of State’s office when you go to renew your driver’s license.

3. But there’s stuff we’re not spending this year, right?

And there are two big categories of things we’re not paying for.

The other category: Human-services programs that are not involved in a consent decree. State Senator Daniel Biss, who chairs the human-services committee, shared a 25-page spreadsheet with WBEZ, showing hundreds of organizations, mostly non-profits, providing services and not getting paid.

“This is a consequence of decisions made decades ago by the state to outsource a lot of service provision to these not-for-profits,” he says. “The theory was it would both be cheaper and more community sensitive.”

These programs are not staffed by state employees, with pay guaranteed by federal courts. Without an appropriation, the state has not paid them.

“At this moment, there's no explanation of how they're going to get paid,” he says.

According to numbers Biss provided, Illinois spent about $1.5 billion on these services last year.

Most people have assumed that at some point, these missing funds for both higher education and human services will come back. “What kind of monsters are we?” says Biss. “We’re not going to leave these human-service providers and college kids hanging forever. We’re going to find the money eventually.”

If Biss is right — if the state does eventually cough up back-pay for higher education and human services — this year’s deficit looks even bigger.

4. How does it work, spending more money than we take in? Like, day-to-day?

Meet State Comptroller Leslie Munger: It’s her job to manage money coming in and going out.

Obviously, she’s falling farther and farther behind. In late March, she said the state’s backlog of bills was $7.5 billion. With income-tax money coming in, that number gets smaller in April, but by the end of June, she expects it to climb to $10 billion.

Here’s how she decides what to pay on a given day. It’s like being a home-owner who is behind on their bills.

“First of all, I say, ‘What do I absolutely have to pay?’” she says. “You have to pay your mortgage, or you’ll lose your house.”

For the state, that involves those debt-service payments. Some of them are for more money than the state takes in on a given day, so for a few days ahead of time, she holds payment on most other things, saving up cash.

And then, there are the groups that have to get paid by court order. Sometimes, they can’t wait their turn for payment. It’s a long wait, and their budgets are tight. Munger encourages them to call her when they’re in financial trouble.

“So then, we go to the back of the line somewhere,” she says, to find invoices to pay. “We pull them up to the front of the line, and we manage that on an ad-hoc basis.”

A spreadsheet from February shows that Munger makes emergency payments like this nearly every day. 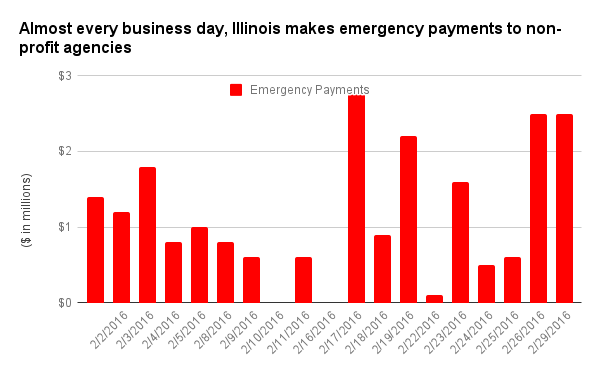 “And we’re trying to run our state this way,” Munger says, shaking her head. “It’s ridiculous.”

5. The result: Non-profits are getting broken. It’s worse than you thought.

Let’s pretend the state turns things around on a dime and money starts flowing again.

No. Here’s an example of where that’s happened, on a small scale.

Earlier this year, a service called “family case management” got added to the list of things we spend money on. It’s supposed to help qualifying families connect to Medicaid-funded health care.

In January lawyers figured out that the case-management service itself is funded by Medicaid. How that happened, and why it took so long, is a whole other story. Regardless, a few weeks later, Leslie Munger started cutting checks for it.

With that new trickle of money coming back, it’s easy to think that a visit to a family case management provider would yield a good-news story.

So I went to one: Austin People’s Action Center on the city’s West Side.

Cynthia Williams started Austin People’s Action Center 35 years ago. It was just her, one room, in a church. By last June, she had 50 employees at three sites, implementing nutrition, social services and employment programs.

Now, she has laid off at least half the staff and closed two of the three sites.

But the expenses haven’t stopped.

“We still have those buildings,” she says. “We’ve got mortgages. We’ve got rent. We’ve got lights. We’ve got the water bill. That didn't go anywhere.” Those services and others, including internet access and copy machines, are on long-term contracts.

Meanwhile, resources are still going away. Williams showed me a space that used to host job-training classes. The day before my visit, the state had come to take the equipment back: Computers.

Here’s what WBEZ learned on that score from the agency in question, the Illinois Department of Transportation, via email from spokesperson Gianna Urgo: “Once the equipment is inventoried it will likely be repurposed for other uses at IDOT.”

Williams still has some private dollars for job-training, allowing her to serve eight students. On the day WBEZ visits, they work out math problems with pencil and paper. 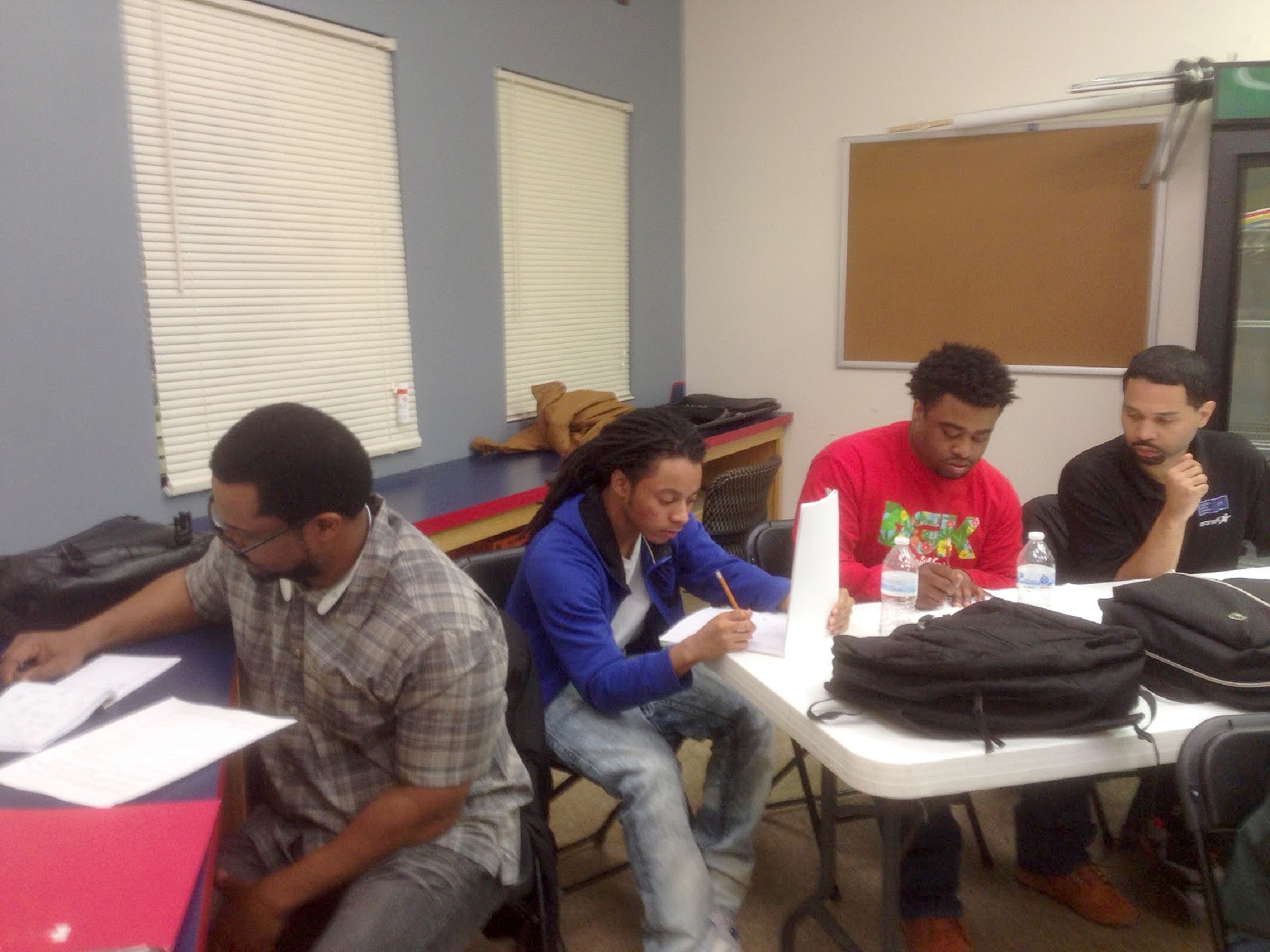 And Austin People’s Action Center has not come roaring back. It can’t. With workers laid off, they lost touch with the clients.

No clients means no services, and no dollars. “We have to start from scratch,” Williams says.

Cynthia Williams spent 35 years building this agency up. It's effectively been dismantled. And, it’s in debt: She borrowed money to maintain a state-funded program. That hasn’t come back at all.

And now, even if the political side of the state budget problem gets resolved tomorrow, she’s stuck.

As we wind down our interview, she says she doesn’t know the next step.

“That is not a good feeling. There’s no more fun,” she says. “You can't see the difference that you're supposed to make every day. The reason you get up every day. You don’t see it no more.”

A few seconds later she asks me to turn off the recorder, saying she’s overcome. She weeps.

Later, I invite Jon Quinn, our questioner, to WBEZ’s studio, to relay what we’ve found. After listening to that last bit from Cynthia Williams, he says it’s hard to hear.

“I always thought it was bad,” he says. “It's sort of worse than I thought.”