On a recent weekday, Reid Mackin of the Belmont Central Chamber of Commerce shows off one of the main commercial strips in the Belmont Cragin neighborhood on the Northwest Side.

There’s a Cricket wireless store on the corner, A&G Fresh Market down the street and a Polish restaurant that nods to the area’s past.

“We used to have a lot of franchise foods, but because of the independent restaurants, the franchise food places couldn’t compete with those folks,” Mackin said.

But these aren’t the restaurants you’d find in a destination neighborhood like Logan Square. Over the years, that neighborhood has obviously gentrified. The rent’s gone up and the white population has increased. The median home price for 2013 was $360,000, above its previous peak.

Belmont Cragin isn’t experiencing anything like Logan Square’s turbo-charged economy. But as it comes back from the housing crisis, some wonder: is this healthy redevelopment or the beginnings of gentrification?

“I can’t tell you how many clients that have started in Logan Square or they’ve started in Humboldt Park and they end up looking in Belmont Cragin,” said Clayton Jirak, Redfin realtor.

Jirak says new buyers are attracted to the neighborhood’s bungalow belt. They like the solid housing stock and prices ranging from around $150,000 to $300,000.

“The other big factor in Belmont Cragin has been the redevelopment and the renovation that’s been going on with a lot of distressed properties that were left over from the real estate recession,” he said.

Belmont Cragin hasn’t fully recovered, but in 2013 its median home price was up nearly 24 percent from its lowest point after the housing crash. At the high end of the market, a newly flipped home was recently listed at $435,000.

Those types of sales worry Julio Rodriguez. He’s the director of financial education for the Northwest Side Housing Center.

He says some longtime residents are getting priced out because of those investors.

“Our goal is to have it community owned and have community residents involved. But it’s kind of hard to accomplish that when we have so many developers coming in buying, flipping it and renting out for a couple of years and selling it once home prices go up,” he said.

The organization’s executive director James Rudyk points to Logan Square where a small number of investors own a lot of property.

“What may have started off as a good idea — let’s get some new apartments, let’s create loft space, or lets put in new retail or a coffee shop. Great, great, great. But when that happens then all of a sudden folks who have been renting for $800 and now have to pay $1200 or have to leave their home or lose their home, it’s not affordable,” Rudyk said.

He finds himself asking where the line is between redevelopment and gentrification.

“How many new condos are too many? How many Starbucks are too many? So I think there’s a tipping point a neighborhood has to reach. What it is? I don’t know,” he said.

But not everyone in this neighborhood thinks that tipping point is imminent.

Peggy Mejias has been living in this house in Belmont Cragin since the 1980s, when home prices were near $50,000. Back then her household was the second Latino family on the block. Over the years she’s seen the neighborhood shift from mostly white to mostly brown.

Mejias says there are more businesses opening up, like a busy laundrymat that she calls “nice and expensive” and a Dunkin Donuts that’s packed in the mornings.

Then there’s the vacant bar near her house. It’s been converted into a trendy-looking hot dog eatery that’s set to open next month.

“I caught one of the construction guys and he said the person who purchased it, he’s been working for him for a long time. He’s an investor and he goes into neighborhoods that he sees are up-and-coming. And I walked home thinking, ‘Oh yeah, up-and-coming. Here we go,’” she said.

Mejias doubts this shop will be wildly successful. She knows values in the neighborhood are going up, but she considers that normal redevelopment rather than the early signs of gentrification.

“Gentrification is kind of bringing in a completely different class of people. The artistic. Like you see in, West Town, Bucktown when you saw all of that, it was the hipsters. It was all of that. These are just average families,” she said.

That kind of stable growth is the same thing the Northwest Side Housing Center is seeking. It offers things like foreclosure prevention and financial education programs to keep the neighborhood affordable. 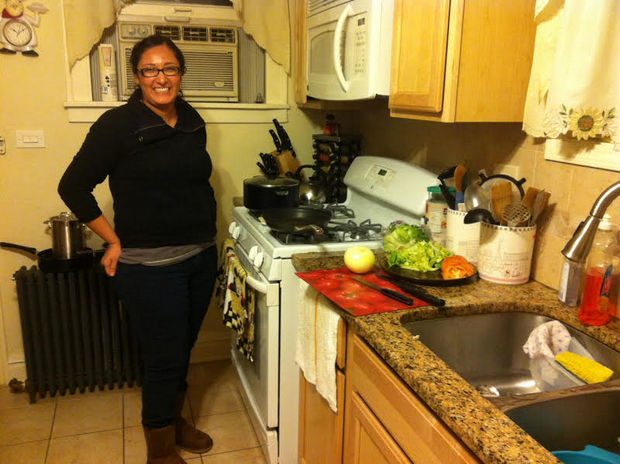 Gloria Valencia took advantage of some of those services by taking a free homeownership class. She then applied for a loan from the Federal Housing Administration that allowed her to buy a four-bedroom house in the neighborhood last year.

The Northwest Side Housing Center even helped her start a block club.

James Rudyk says affordability doesn’t mean housing values have to remain stagnant or that certain people or businesses should stay out.

Rudyk hopes it’s the people who live here, and not outside investors. He says that may determine whether Belmont Cragin redevelops or gentrifies.

Susie An is WBEZ’s business reporter. Follow her @soosieon.