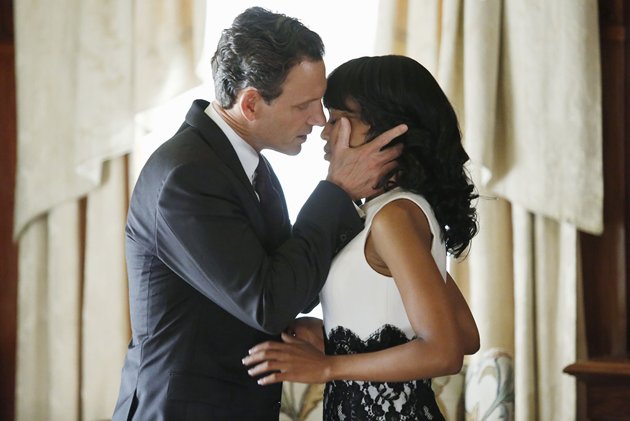 One of the hottest TV romances to enrapture audiences over the past year has been the steamy liaison between a fictional President and his former Communications Director, played by Tony Goldwyn and Kerry Washington, respectively, on the ABC smash hit Scandal. However, the "scandalous" aspect of their affair has been mostly focused on their clashing levels of political power (and the fact that the President is cheating on his First Lady), not the outdated, potentially hamfisted conundrum of a white man dating a black woman.
At one point, Olivia Pope (Washington) mentions the Sally Hemings-Thomas Jefferson nature of their relationship. President Fitzgerald "Fitz" Grant (Goldwyn) is stung by the comment, and later remarks, "You're playing the race card because I'm in love with you? Come on! Don't belittle us." Interestingly enough, I didn't give much thought at all to the interracial aspect of their pairing until Olivia brought it up.
I suppose the subject cannot be ignored completely, nor should it be; however, the choice of Scandal creator Shonda Rhimes to make their racial disparity more of a non-issue than a huge brouhaha may be the biggest watershed moment of all.

Orange is the New Black is another example of show that proves times are changing for the better. Not only does the Netflix prison dramedy contain a diverse range of romantic entanglements—from a Latina prisoner's dalliance with her white guard to a a plethora of same-sex encounters that nimbly defy racial divides—but the series also depicts an interracial family with appropriately subtle nuance and grace. 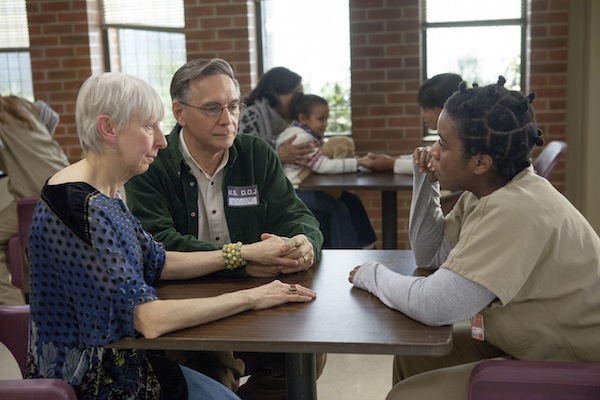 The parents of black inmate Suzanne "Crazy Eyes" Warren just happen to be white; a shock to some viewers, maybe, but also a moment that feels heart-tuggingly genuine and perhaps even relatable to audiences who may have otherwise written her off as another "crazy" black woman stereotype. Did being adopted by a seemingly nice, affulent, "normal" white couple contribute to her issues later in life? As with the rest of the complex female characters on OITNB, I can't wait to delve deeper into Crazy Eyes' backstory and find out.

Of course, interracial families don't seem like such a big deal to most people in 2013; in fact, white parents adopting black or Asian children are usually perceived as more en vogue than unconventional. But when a Cheerios commercial nonchalantly featuring a white mother, black father and cute-as-a-button biracial daughter can cause a racist uproar in the new millenium, I am reminded that we still have a long way to go.

The fact of the matter is that TV shows still take great risks in veering from the norm, especially when the shows' leads (not just their quirky supporting characters) are the ones to defy previously ironclad boundaries of race, sex and gender roles in relationships. 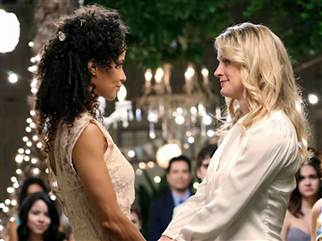 Enter The Fosters, a new drama series from ABC Family about an interracial lesbian couple and their multi-ethnic family of foster, adopted and biological children. Yes, devoted families just like theirs exist outside the world of television, but rarely are they portrayed front and center as a brood akin to 7th Heaven.

Thankfully, change has arrived in full force, whether the bigots like it or not. And while interracial relationships on TV are still considered "groundbreaking" in this day and age, my hope is they won't even bat an eye in the years to come.

We may not live in a post-racial world; but as an unremittingly hopeless romantic at heart, I'd still like to believe that love is colorblind.