In response to years of what he views as dithering and ineffectual responses by government to the problem he helped identify, climate scientist James Hansen cited a moral obligation in leaving his post at NASA to campaign more actively for political and legal efforts to limit greenhouse gas emissions.

Hansen spent more than four decades forging the scientific basis for manmade climate change. In 1988 he was among the first to sound off on global warming’s hazards, and earlier this month he announced his next paper would be his last for NASA. (He told The New York Times he would continue to publish after retirement and had not ruled out taking an academic appointment.)

So-called “doom-and-gloom” projections of future climate change have been derided for their pessimism, or maybe more often for the unpleasantness of their messengers, to the point that addressing climate change on these terms makes one seem petulant or gauche — no one really wants to hear it. The national political conversation completely buried talk of the climate problem after national cap-and-trade legislation imploded in 2010.

Hansen’s final paper, currently in press, is scientifically rigorous, with seven pages of references, but it makes an impassioned plea for humanity to confront the consequences of climate change and fossil fuel consumption as an existential threat to society:

“Burning all fossil fuels, we conclude, would make much of the planet uninhabitable by humans, thus calling into question strategies that emphasize adaptation to climate change.”

Such an assertion is not unexpected coming from Hansen, who has been criticized for his rhetorical flourishes, even by colleagues who respect his work. Earth won’t turn into “a Venus-like baked-crust CO2 hothouse,” (a claim he has made in the past), at least until the Sun’s brightness increases over the next billion years and helps boil off the oceans. But, the paper reads, “the planet could become uninhabitable long before that” due to anthropogenic warming. 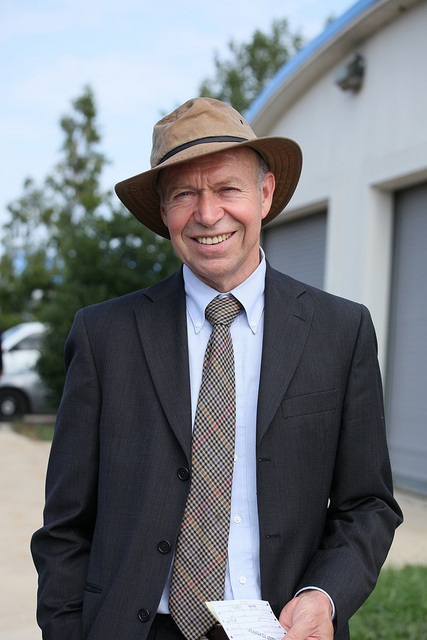 Scientifically, much of the debate fixates on nailing down the planet’s “climate sensitivity” — how much warming actually occurs per unit of extra energy in the atmosphere. Looking at physical evidence of ancient climate change, the paper calibrates a computer model against times when greenhouse gas levels were comparable or higher than they are today.

The authors calculate an average warming of about 16 degrees Celsius if we burn available fossil fuels. Previous scientific publications have suggested temperature increases on that scale could practically wipe out grain production in many parts of the world, and severely diminish the ozone layer that protects us from cancer-causing ultraviolet radiation. Worse, it could get so hot in all but the world’s very mountainous regions that anyone outside would overheat, suffering hyperthermia.

The paper — co-authored by Hansen’s NASA and Columbia University colleagues Makiko Sato, Gary Russell and Pushker Kharecha — says current models exaggerate the slow response time of ice sheets, and assume the climate system’s own inertia will forestall catastrophic changes longer than they actually will. Hansen’s earlier research was instrumental in showing how, on a human timescale, oceans and massive ice sheets on Greenland and Antarctica mask the planet’s response to our feverish emissions of greenhouse gases. These systems have a long response time to human-made warming so, as Hansen writes, “observed climate changes are only a partial response to the current climate forcing, with further response still ‘in-the-pipeline.’”

Thus, his earlier dig at adaptation strategies. Broadly, there are two key categories of climate change action: mitigation and adaptation. Mitigation means pursuing efforts that limit or reduce greenhouse gas emissions. Adaptation assumes a certain amount of warming and asks what humans can do to adjust to their new environment in the future. If our current course of action even flirts with consequences like those suggested in this paper, Hansen and his co-authors suggest, adaptation will be impossible — a moot point.

By the scientific assessment of Hansen et al., an extra 12 watts of energy per square meter in the atmosphere could have devastating effects. But could that much warming happen? Yes, they conclude: there are more than enough fossil fuels available to cause this warming (coal alone could do it, not to mention with the help of unconventional sources like oil sands and natural gas freed up by fracking).

“It seems implausible that humanity will not alter its energy course as consequences of burning all fossil fuels become clearer,” reads the paper’s conclusion. “Yet strong evidence about the dangers of human-made climate change have so far had little effect. Whether governments continue to be so foolhardy as to allow or encourage development of all fossil fuels may determine the fate of humanity.”