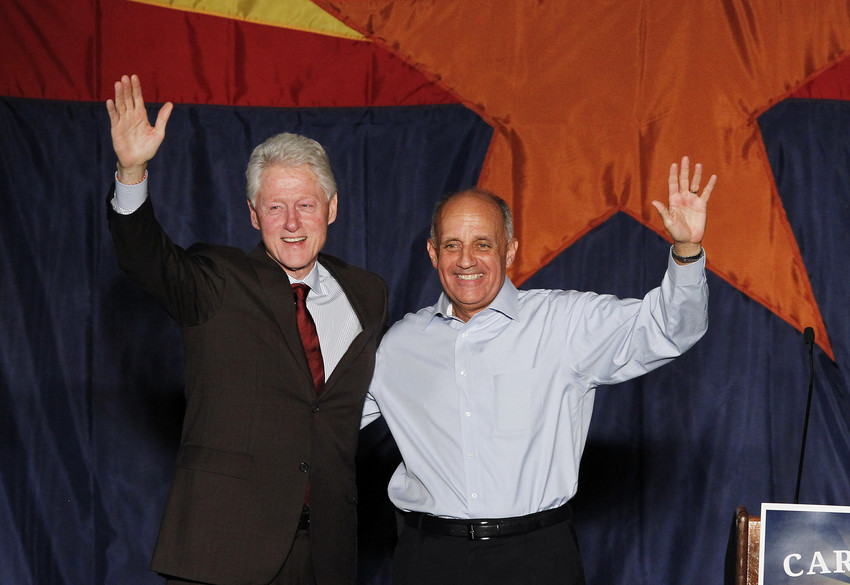 Things are looking better for the Democrats not just to hold the senate but to actually gain seats since I last checked in on those races in September.

All but one of the Democrats I said were safe then continue to improve their numbers.

But a number of races I thought were sure bets for the GOP have tightened in the last few weeks. Top among these is in Indiana, where the GOP’s Richard Mourdock may have shot himself in the foot with his comments about God and rapists. Democratic challenger Joe Donnelly--only marginally better on choice--leads by ten points in the latest polls.

And then there’s Arizona, where Dem Richard Carmona has climbed up about ten points, made last minute ad buys and has been holding Republican Jeff Flake under 50 percent and within the margin of error in recent polls. The other story in Arizona is that President Barack Obama and GOP nominee Mitt Romney are in a dead heat. Arizona has been counted as a red state in most polls I’ve seen, so this could be a real surprise. It only has 11 electoral votes, but that’s more than Iowa’s 6 and Wisconsin’s 10. (And if Obama wins Arizona, he'd better kiss some Latino butt fast.)

In Nebraska, former Democratic Sen. Bob Kerrey was being trounced by GOP Deb Fischer by almost 20 points for most of the race, but Kerrey’s pulled within 3 recently--the margin of error--and might pull off an upset. He recently scored an endorsement from former Republican Sen. Chuck Hagel, who’s always been a bit of a party maverick, but it could be just what Kerrey needs. Hagel, who represented Nebraska too, is campaigning for Kerrey through the weekend.

And the Democratic leaners continue to improve: Tammy Baldwin may yet be first open lesbian in the U.S. Senate, as she leads more comfortably in Wisconsin; Elizabeth Warren is ahead in Massachusetts; Chris Murphy is significantly up in Connecticut ; and  Shelley Berkley remains within the margin of error against Dean Heller in Nevada.

Not everything’s been rosy for the Dems on the senate campaign trail. In Ohio, Sherwood Brown has lost considerable ground to GOP challenger Josh Mandel but is still up about five points.

And though Claire McCaskill should have left Republican Todd behind by now, the Republican Party of Missouri, which had abandoned Akin after his “legitimate rape” comments, just poured $700,000 into the race.

And still up in the air: Democrat Tim Kaine vs. GOPer George Allen in Virginia, and the Montana match-up between Democrat Jon Tester and Republican Denny Rehberg.

But there seems to be no path now for the Republicans to take the senate.

No one seems to be buying Romney’s Jeep-is-taking-Ohio-jobs-to-China ploy, but he’s doubling down.

After being called out by Jeep’s chief executive with an unequivocal refutation of his recent Ohio ad and a promise to invest $500 million more at the Toledo Jeep plant, Romney spokesperson Andrea Saul responded: “Their comments don’t refute anything in our ad.”

Which is crazy crap.

In the meantime, both New York Mayor Michael Bloomberg and conservative financial magazine The Economist have endorsed Obama. It’s not a very warm endorsement but they loathe Romney precisely because of stuff like the Ohio ad.

Is there a more absurd congressional race than South Florida’s match between Republican incumbent David Rivera and Dem Joe Garcia?

Rivera, who I’ve been following here, just got slapped with 11 ethics violations by a state panel (which includes fellow Republicans). That’s on top of an FBI investigation and a federal probe of campaign fund misuse.

In the meantime, the stooge he set up to run against Garcia in the primary has pleaded the Fifth and will likely cooperate with any and all investigations to stay out of jail.

And Ana Alliegro, Rivera’s former aide and the stooge’s ex-campaign manager, remains missing after skipping her interview with the FBI.