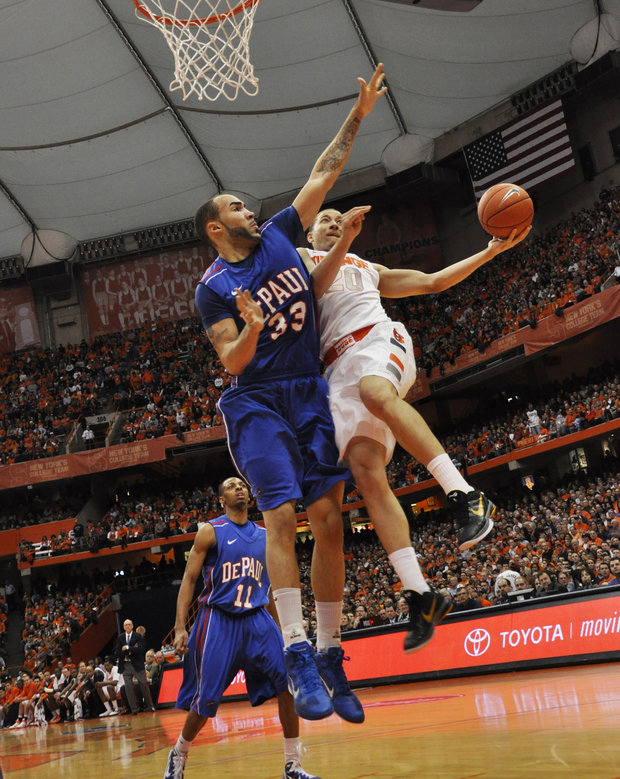 While colleges across the country celebrate getting into the NCAA men’s basketball tournament, there is no madness in Chicago. It has been years since Chicago had a spotlight on it for its men's college basketball prowess. This is difficult to understand with the quality of the players who excel on the high school courts of Chicago. Particularly since the Big Ten Conference (arguably the best in the country) just held court at the United Center for its tournament. It’s tough to see local teams in such a rut. It’s hard to watch the best talent from Chicago not play here on the NCAA Division I level.

Fifty years ago, the Loyola Ramblers celebrated the last time a time from Chicago won a national title. DePaul during the 70s and 80s was a nationally renowned team under Head Coach Ray Meyer. During the Blue Demons hey day, they were the basketball team in Chicago (not the Bulls). This of course was pre-Michael Jordan and six NBA titles. There have been Chicago schools in the NCAA tournament in the past few decades, but none have been a premier team in the country.

There have been times when Bradley, Northern Illinois, Southern Illinois and Illinois have produced winning men's programs. Illinois has made numerous appearances in the NCAA tournament. It was just eight years ago when Bruce Weber took the Illini with Dee Brown and Deron Williams to the brink of a NCAA championship. They lost to North Carolina in the final.

Many give credit to former coach Bill Self for bringing in those players before he bolted to Kansas and won the NCAA championship there. After the loss to the Tar Heels, Illinois saw erosion of talent. Weber was fired and now Illinois is under the leadership of John Groce. In his first season, the Illini coach is guiding the team to post season play. The #7 seed Illinois will play #10 seed Colorado in first round NCAA action on Friday in Austin, Texas.

Simeon High School’s Jabari Parker, the top national player and an excellent student, is headed to Duke. Why not? It is an elite program and has been consistently challenging for national titles. It is a huge shame that a team from this area, DePaul or Northwestern, was not even considered. Derrick Rose left here to play at Memphis for a year before leaping to the NBA.

Why is it hard to keep the best Chicago high school players? The factors are numerous: campus life, coaches, consistency of excellence, putting a distance from the streets of Chicago (and for some, the weather). Whatever the reasons, the local college teams see players leave and not become hometown heroes.

Here is a look at what the Chicago college teams did this season:

The Blue Demons been spinning their wheels for years. They have been the doormat in the conference and now they will be joining the new league of the Catholic schools. Playing in Rosemont is a huge negative for the school. Their last NCAA appearance was 2004.

They started the season 7-0. Numerous injuries and a suspension depleted the team’s roster. With the loss to Iowa in the first round on Thursday, Northwestern fired head coach Bill Carmody on Saturday after 13 years guiding the team. One of the names highlighted for this job is Duke assistant Chris Collins. He is from the area and his father Doug is a former Chicago Bulls coach. NU has never been to the NCAA tournament.

The Flames will go to the Collegeinsider.com tournament. It's a rather new event that gives some teams a chance to experience post season play. UIC has had four post season appearances, three NCAA, one NIT and no wins.

Head coach Porter Moser has had the job for two years. The Ramblers have not been to the NCAA since their "Sweet 16" appearance in 1985.

They won the Great West Conference tournament, which they also hosted on Saturday. The win gave them a berth in the Collegeinsider.com tournament. It is the school’s first post-season appearance. The Cougars will join the WAC next year. Head coach Tracey Dilby is finishing his third season. He was a former DePaul and UIC assistant.

According to former players, it doesn’t take much to turn a basketball program. If a school can recruit one or two top notch players, it can catapult a college team. The challenge is convincing Chicago student athletes to stay here and make a difference.

Looking at what John Groce did in his first recruiting year may mean Illinois is moving in the right direction. He will have two players from Simeon high school playing for him next season: Kendrick Nunn and Jaylon Tate. Groce got some help from an Illinois alumni and former star Kendall Gill. The new coach asked him to recruit and it worked. Gill’s pitch is something his parents told him: stay in your home state and it will be beneficial when the playing career is completed. He believes the alumni base in Illinois helped him when his playing days in the NBA were over.