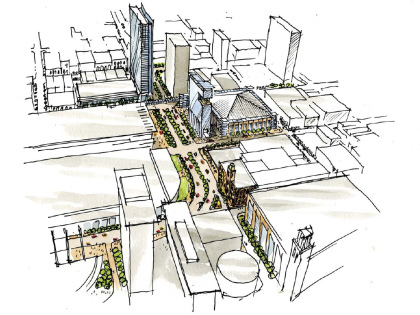 Fearing the planned $195 million sports arena near McCormick Place could be an architectural missed-shot, McPier officials today announced they have redrafted the search for architects in hopes of getting a better design for the project.

Jim Reilly, CEO of the Metropolitan Pier and Exposition Authority—the agency commonly nicknamed "McPier"—said the original request for qualifications for architects was "pretty specific to firms who had experience with sports facilities." McPier's original conceptual drawings of the project appear with this post. The peak-roofed building in the center of the above image represents the arena.

Reilly said the new pitch is aimed at also getting top-drawer architects who have never designed sports facilities, but would be willing to team with firms that have.

"The Jeanne Gangs of the world—and I don't mean to point to her specifically," Reilly said, referencing the MacArthur Fellow whose firm, Studio Gang, designed Aqua Tower at Columbus and Randolph. "This way, some well-known or up-and-coming designer with no arena experience can apply. And in Phase 2 [of the process] they can team up with someone who does know that. That's our hope."

But can potentially better architecture make the project go down easier among critics who believe the 10,000-seat areana is a bad fit for the area? The center, which will also contain meeting spaces and will also be home to the DePaul Blue Demon basketball program, is planned for an area bounded by 21st Street, Indiana Avenue, Cermak Road, and Prairie Avenue?

"It's a tall order to come up with a design that can accommodate everything they want to accommodate," said Tina Feldstein, president of the Prairie District Neighborhood Alliance, a group that opposes the stadium. "It's a bad deal, period. No matter which way you slice it or dice it." 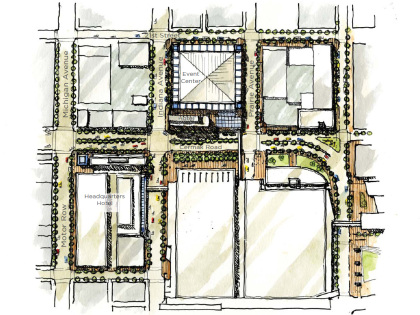 Reilly said designing the stadium in a relatively small site near a residential neighborhood could be a tricky enterprise.

Under the plan, architects would submit their qualifications and experience to McPier officials. The agency, with the help of advisors, would select three to five finalists who would each receive a $50,000 stipend to submit detailed design concepts in a second phase. The winner would be picked by late August. McPier used a similar tact last year to select a design firm in charge of renovating Navy Pier. James Corner Field Operations won the bid and the competition drew proposals from world-class architects such as Norman Foster, Zaha Hadid and Chicago's SOM.

Reilly said he wasn't sure if the stadium would attract architects of that caliber, "but that is our hope."

The project also includes a 1,200 room hotel announced with the stadium on March 16. Reilly said the architect selected for the stadium would also be called to create design guidelines for an adjacent 500-room hotel to be developed later by a yet-to-be-selected private developer. He said the new approach won't affect the pricetag. The project is being supported with $70 million from DePaul, $70 million in bonds sold by McPier and $55 million in city of Chicago tax increment finance funds.

Lee Bey blogs about architecture for WBEZ. Follow him @LEEBEY.