For my husband’s birthday in January I gave him a present with a totally selfish ulterior motive in mind: I packed the baby and dog up and went to my parents’ house for the night and stayed there until late afternoon the next day. I did this under the auspices of “letting you have some alone time,” but the real reason I did it was because I wanted Steve to do the same thing for me when my birthday came around. Which he did, because he gets it. 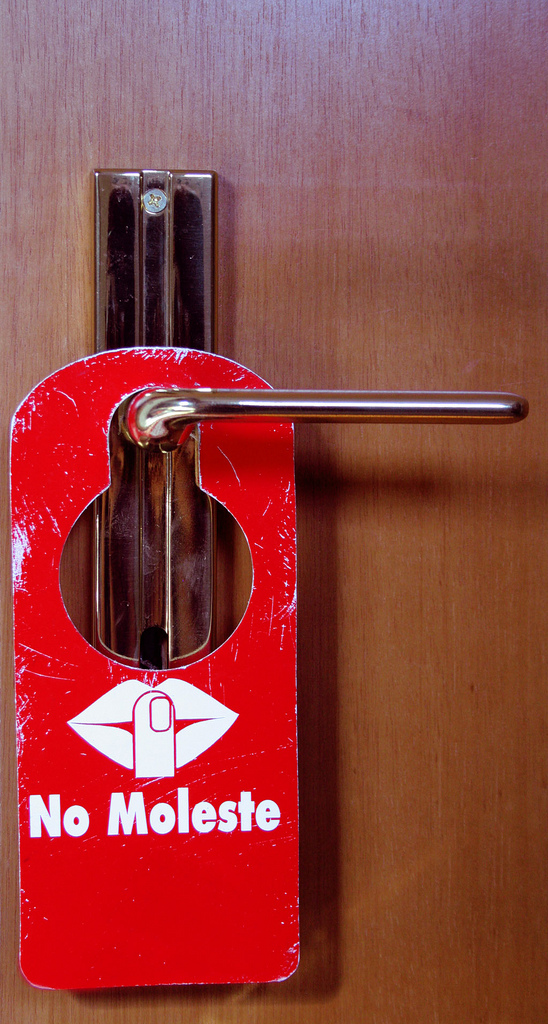 I come from alone time stock.

I had a stay-at-home mother who wrote up math quizzes for me when I was struggling with fractions, sat by my side on the bench as I learned piano, cooked dinner just about every night and sometimes even purchased clothing options ('this dress or this one?') for me when she was out shopping.

She was/is a very dedicated mom which probably explains why she needed us to get the hell out once in awhile. Every year, my dad took my brother and me on a little vacation, just the three of us, while mom stayed home. We were under no illusions: mom didn’t stay behind because she hated flying or loathed skiing. It was her vacation as well as ours. It was nothing personal.

Like Steve, we got it. Who wouldn’t like a few nights without the burden of cooking for three other people or keeping the TV volume at an unreasonable 10 (you really needed it at least to 13 to hear) after my dad’s 9 p.m. bedtime? When I finally moved out to my own apartment, with no roommates, when I was 25 or so, I think she was a little bit jealous, since she’d never lived alone.

I loved my apartment, a little skybox that had a view of both the lake and Wrigley Field (pretty awesome, even though I’m not a Cubs fan) that was perfectly cozy, just the right size for one gal. I didn’t move in with my husband until several months after he proposed to me, partially because I didn’t want to give up that place until the last possible second.

Steve and I are pretty good roommates I think, although part of what made it easy our first few years together was a good deal of independence even when we were in the house together. He’d work downstairs while I’d work (or watch TV) upstairs, so we didn’t have to be in each others’ hair.

The baby, of course, changed all that, because he’s not an independent fellow quite yet. There is naptime, but the rest of the time you kind of need to keep an eye on him, and our lives revolve around this. It’s not that difficult—that’s what babies do, and there’s only one of him, but I missed my alone time. I didn’t realize this at first: it took a strange situation for it to hit me. The baby got sick in November and was hospitalized (he’s fine, it turned out to be nothing).

My parents took the dog (we don’t have a yard so he has to go on at least three walks a day) and I spent two days at the hospital, including one night where I tried to sleep in a chair holding the baby because he was inconsolable unless he was in someone’s arms.

That second night, Steve and I switched and I went home to sleep while he spent the night in the hospital with the baby. All had been declared fine by this point: the baby was just being held for observations, so I wasn’t anywhere near as upset or scared as I had been when he got his little baby spinal tap.

So with that relief and the opportunity to finally sleep, I realized that I was alone in the house for the first time ever without: a dog, a baby and a husband. And...it was kind of awesome.

I felt guilty about this but also reveled in enjoying my guilt in utter silence. Then I took a couple Benedryl and drifted off in front of Law & Order in bed, which is one of my favorite things to do when I don't have to worry about keeping someone next to me in bed awake.

So when the birthdays rolled around, I decided it was time to splurge on purposeful, relaxing alone time, not the kind that only came about because something very scary and expensive happened.

What did I do with my approximately 20 hours of alone time? Nothing amazing. I went out to dinner with a friend. I jogged outside. I cooked. Laundry was done.

To be honest, there were a couple of moments where I felt scared about being alone in the house, where I missed the baby. I didn't sleep that great. I lightly monitored my husband’s Facebook page in case he put up cute pictures of the baby.

But there was a luxury in waking up Saturday morning and knowing I didn't have to speak to anyone, change anyone or take anyone outside. I hadn’t been that completely alone for about five years. It was a wonderful gift. And the bonus was that I was more appreciative of the guys when they came home.

So if you have a spouse who might appreciate alone time, if it’s practical, perhaps think about either buzzing off or sending him or her away for a little bit of uninterrupted time. Of course, alone time is a luxury and it isn’t for everyone: I’m sure there are lots of people out there who would tear their hair out with that much solitude. But I’m not one of them. I’m sure there are also people out there who question moms who send their kids away for short periods of time. But I’m not one of them, either, because I had one.

PS: Side note, for my birthday, I also gave my husband a bunch of gift cards I had acquired from a department store and requested that he get me something there, the present being that I didn’t have to go shopping, because that just seems too exhausting these days. The thing he picked out for me was lovely but what I especially love about it is that I didn’t have to go and try it on in a store, which was another thoughtful present for me to give me.