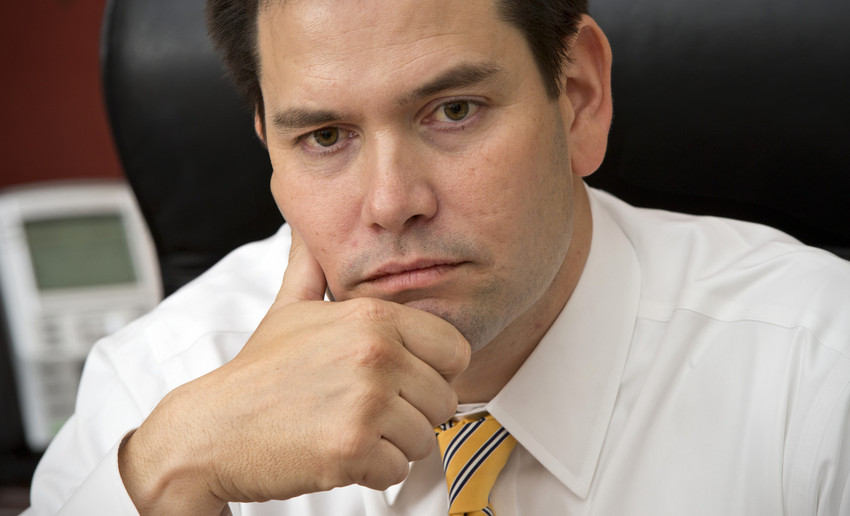 Everybody’s having fun with Sen. Marco Rubio’s big gulp, even Rubio himself, during the Republican rebuttal to President Barack Obama’s State of the Union. And perhaps it’s moments like that parched, wild-eyed lunge of Rubio’s for the Poland Springs that will justify keeping the circus going but, honestly, can we just cut the crap?

The State of the Union is constitutionally mandated, no matter who the president is: a war criminal like George W. Bush or a socialist fool like Obama.

It’s right there in Article II, Section 3 of the Constitution: “He shall from time to time give Congress information of the State of the Union and recommend to their Consideration such measures as he shall judge necessary and expedient.”

But here’s what’s not constitutionally mandated: the opposition response. In fact, it’s only been a real thing since the 1966, when Republicans decided to talk back to Lyndon B. Johnson on TV.

But that relatively young tradition has now gone from rebuttal to nothing even close to a rebuttal, to free air time for the opposition party to try out, “American Idol”-style, potential presidential candidates. Before Rubio, the parade included Bobby Jindal, Paul Ryan and Mitch Daniels.

Just consider Rubio’s response last night. First and foremost, it wasn’t a rebuttal – the reason the GOP got the air time in the first place. Rubio’s speech was a stump written long before the president even delivered the State of the Union, simple as that.

But let’s say it’s fair that the Repubs have a speech ready, then adjust it to actually contest the President’s proposals. I’d be for that. Except that’s not what happened.

What we got instead was Obama saying, yup, we need to deal with Medicare with “modest reforms” – a huge admission on the part of this president – and Rubio, as if he hadn’t heard a thing, saying, “Anyone who is in favor of leaving Medicare exactly the way it is right now, is in favor of bankrupting it.”

Or this: The president saying, “It is our unfinished task to make sure that this government works on behalf of the many, and not just the few; that it encourages free enterprise, rewards individual initiative, and opens the doors of opportunity to every child across this great nation.”

And Rubio’s ridiculous response: “Presidents in both parties – from John F. Kennedy to Ronald Reagan – have known that our free enterprise economy is the source of our middle class prosperity. But President Obama? He believes it’s the cause of our problems.”

Who was Rubio talking to? The choir, the same Republican echo chamber that convinced millions of people that Mitt Romney wasn’t just going to win but to whomp Obama and then got up on a Wednesday in November and wondered who betrayed them. (A few, apparently, have continued their wake state and walked away from Fox, giving the channel its lowest numbers in years, both in actual ratings and in credibility.)

As a result, Rubio saddled forth with matters that are standard GOP talking points – facts be damned -- but weren’t even vaguely hinted at in Obama’s speech, like this gem of a paragraph:

"For example, Obamacare was supposed to help middle class Americans afford health insurance. But now, some people are losing the health insurance they were happy with. And because Obamacare created expensive requirements for companies with more than 50 employees, now many of these businesses aren’t hiring. Not only that; they’re being forced to lay people off and switch from full-time employees to part-time workers.”

This morning Rubio finally addressed a specific in the president’s speech. Responding to Obama’s call for a higher minimum wage, from $7.25 to $9, Rubio said, “I don’t think minimum wage laws work.”

Instead, he’d like to foster an environment for “good paying jobs” – but how he’s gonna do that, and encourage employers to pay a decent wage based on the goodness of their hearts (as thousands of years of human history have shown of man just doing right by man over and over … ), well, that’s still up in the air.

And, no, in spite of Rubio’s office’s best efforts to make us believe otherwise, last night was not the first time the SOTU rebuttal has been bilingual, not even bilingually by the same guy: That tradition began in 2004 with then New Mexico Gov. Bill Richardson. Rubio’s not even the first Republican or even the first Cuban-American to give it: fellow Cuban-American, Rep. Ileana Ros-Lehtinen, gave the Spanish-language rebuttal for the GOP in 2011.

Of course, it wasn’t just Rubio who attempted to rebutt last night. Sen. Rand Paul stepped up for the Tea Party, with a speech that was not much more rebuttal than Rubio’s, but which at least endorsed some ideas worth discussing: the president’s kill list, cutting military spending, education reform.

I realize the news outlets can’t help themselves. They’re like a junkie who’s just been handed the last heroin baggie and will lick at any last possibility to get their high.

But it makes me wonder: When the GOP takes the White House again – God help us – will the networks let the Dems and, say, the Greens, respond to the State of the Union?