There's only a handful of the motels left, tucked between the shopping plazas and condos on north Lincoln Avenue on the city’s Northwest Side. Some, like the Guest House, are covered in vines and peeling paint. Others, like the River Park Motel, have changed names over the years or toned down their datedness. Most of the remaining motels on Lincoln Avenue have seen better days, but — somehow — they're all still in business.

Nicole Kirkwood lives on Lincoln Avenue and passes the Summit Motel on her way to Dominicks. But it wasn't until she started driving farther north — to reach restaurants and shops on Devon Avenue — that she noticed the motels seemed out of place.

"I just realized how many of them there are in a concentrated area that is not at all a draw for tourists," she says.

So, she asked Curious City:

Why were so many motels built on one stretch of Lincoln Avenue? How do they survive?

After some talking to a motel owner, a historian and the local alderman, we learn the motels’ survival is due to a fair share of luck. But their story’s remarkable because — more than sixty years after the golden age of roadside motels — Lincoln Avenue’s motel row has weathered tectonic shifts in transportation, the ire of City Hall and its own seedy reputation.

Between Foster Avenue and Skokie Boulevard, Lincoln Avenue overlaps with a cross-country highway. Designated in 1926, U.S. Route 41 stretches 2,000 miles between the Upper Peninsula in Michigan to Miami, Florida.

Mid-century, it was considered a major route, but today it’s easy to forget that U.S. 41 moves well beyond the city limits and that only a five-mile stretch includes a portion of Lincoln Avenue. 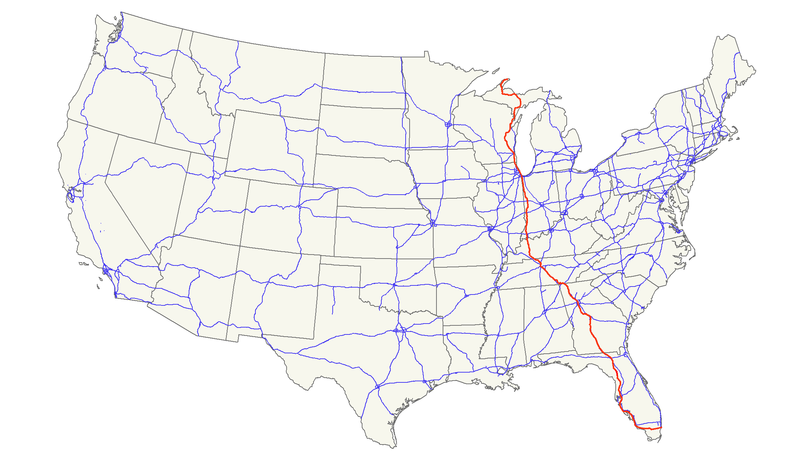 Instead, Nicole and most Chicagoans see Lincoln Avenue as a diagonal street that moves through several North Side neighborhoods. Or, it’s the route to Lake Shore Drive or a way return home from the grocery store.

"If you live on the North Side and know Lincoln Avenue, you think of it as your highway," says Patrick Steffes, editor of the history blog Forgotten Chicago. "You're not thinking that this [U.S. 41] is an interstate highway that goes from near Canada to near Cuba."

So it’s little wonder the motels can seem out of place to Nicole or anyone else. There was a time, though, when worn out travelers along U.S. 41 entered the edge of Chicago and were glad to have motels at the ready. To understand the context for the hotels’ rise and eventual decline, it’s best to encounter them from the vantage of travelers back in the day. For that, I call up Steffes and tell him I’ve got an idea.

Are we there yet?

On a Monday morning, Patrick Steffes and I exit off the Edens Expressway and make a right turn onto U.S. 41. We're getting into character. We pretend we're a couple with two imaginary kids in the back seat. We pretend our Honda Civic is a actually a ‘55 Ford station wagon and that we're driving from Wisconsin to Chicago. The year is 1957.

Steffes points out what we would've seen along the way. That Bank of America across from the Old Orchard Mall in Skokie? That was once an upscale department store. The Wendy’s? Those were probably Big Boy drive-ups or diners. We're still a few miles outside of Chicago and, so far, we've been heading southeast the entire time.

It's not quite a road trip, but I still feel kind of excited as we approach the city limits. Remember, I'm pretending to be a Midwest mom with a beehive hairdo who hasn't gotten out of Sheboygan in a while. If my kids in the back were perpetually chanting "Are we there yet?" now would be the time I'd answer "Yes."

Crossing over Devon and into Chicago, the motel signs start rippling by. They're still hard to ignore, even if they're not flashing in neon or promising color television.

“You would’ve been a weary traveler coming in from wherever you’re coming from, and the signs really made you want to stop for the night,” Steffes says. 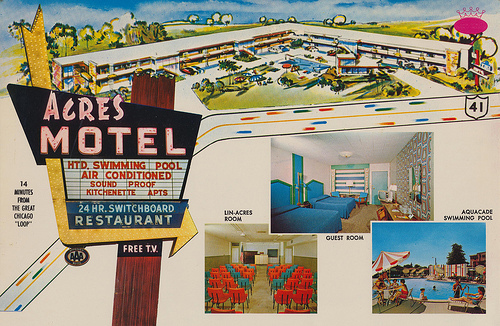 The motels are the first places travelers (like ourselves) can get some rest within city limits. They’re kind of like flags at the end of a race. The neon signs are more than flashy advertising; they’re signals that you made it.

A little ways down Lincoln, we pass the O-Mi, the Rio, and the empty lot still staked with a sign for the Stars Motel. As the road takes a sharp right, we pass Foster Avenue. The wide lanes narrow, the buildings close in on the street, people are walking. Suddenly, it feels like we're in a city. It becomes clear that everything between Devon and Foster is Lincoln Square's edge of town.

“That stretch north of Foster is kind of like no-man’s land,” Steffes says, sticking to his 1950s persona. “Things had not yet been built and there was space available. Now, we’ve only gone a few blocks and it’s a dense, Chicago, urban-looking environment.”

The fact that Lincoln Avenue was once along a major highway explains why there’s a motel row there, but Steffes (out of character now) says there's another reason why the motels have that distinctive ‘50s flair. Chicago’s zoning regulations, he says, didn’t allow motels within the city limits until 1953. It took only a few years for many of them to pop up.

“Chicago would’ve welcomed the motels after that because the city also built in revenue with a new motel tax,” Steffes says. “And [U.S.] 41 offered lots of open space, plus being a major U.S. highway. It’s the perfect place for them to be located.”

There were once 14 motels on North Lincoln Avenue; nine remain today.

But what went wrong? How did places like the old Patio Motel with signs that read “An adventure in living!” come to feel so dead?

Put simply: It was the interstate system. 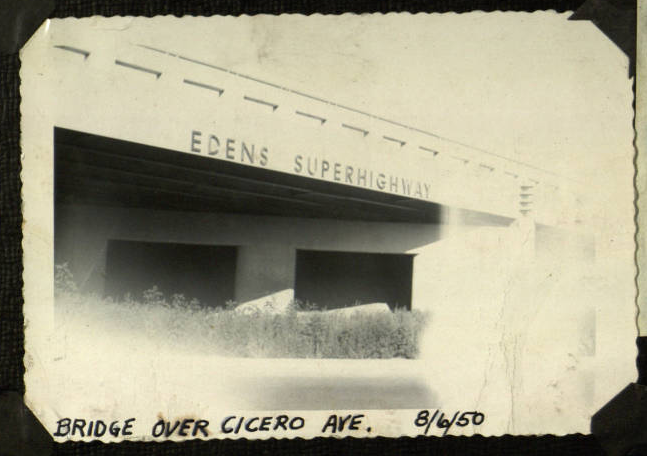 The Edens Expressway opened in 1951, creating a quick way in and out of downtown Chicago. Post-war economic prosperity was in full swing, and the interstate system promised a faster pace, an expansion of new frontiers and the freedom to travel the country at will. But it took decades for those first interstates to fulfill that promise.

But the interstate system did eventually sideline important highway routes, including U.S. 41. As the system around Chicago expanded and modernized the motels were left hanging.

What the motels were up against

Which brings us to the second part of Nicole's question: How do those motels on Lincoln Avenue survive?

The operations gained reputations as places for illegal activity, including crime and prostitution. But some, like the Spa Motel, were popular among traveling bands, too. Some motels even attracted permanent residents, who’d live in their rooms for years.

The Chicago Tribune ran headlines like “Checkout time motels live down to reputation” (1993) and “Lights out at seedy motels” (1998).  Perhaps the most high-profile crime was in 1981, when a series of rapes and robberies along motel row ended at the Patio Motel. The rapist broke into a first-floor room, locked a man and several children in the bathroom, then raped the man's wife and daughter.

“They became places that you wouldn’t have a relative that was in town stay overnight,” says Ald. Patrick O’Connor (40th). “It became apparent that [the motels] needed to leave.”

Though the motels’ new clientele wasn’t the clientele they had originally hoped to attract, they still kept the motels in business. At least for a while.

A turning point for the motels came in the late ‘90s, when Mayor Richard M. Daley’s public works campaign was well under way. Years before, the mayor began modernizing police stations and expanding branches of the Chicago Public Library system.

The motels had been placed into TIF (tax increment financing) districts and Ald. O’Connor had an idea of where to put a new police station and a new library — should anyone happen to ask.

Lo and behold, they did.

“We had properties that we would be willing to go in, condemn and convert immediately without a great deal of controversy or without a lot of people in the neighborhood saying ‘Oh no, don’t take that, that’s my favorite grocery store or that’s my favorite dress shop,’ ” O’Connor says. “These were places that nobody in the neighborhood was lighting any candles to keep.”

By 2000, Mayor Daley and Alderman O’Connor helped demolish three motels: The Spa, The Riverside, and The Acres, with plans to build a police station, a park and a public library, respectively.

“When those buildings came down, quite honestly the enjoyment was only matched by the days we cut the ribbons on the new uses,” O’Connor says.

The plan was to demolish each motel, O’Connor says, but public money ran out before the city could raze them all. Again, nine of the 14 survived. Even a partial success, though, solidified public sentiment: The motels were officially unwelcome in their own community.

Manu Patel bought the Apache Motel at 5535 North Lincoln Avenue in 1987. Even at the time, he says, he knew he’d have to fight motel row’s seedy reputation in order to stay in business. 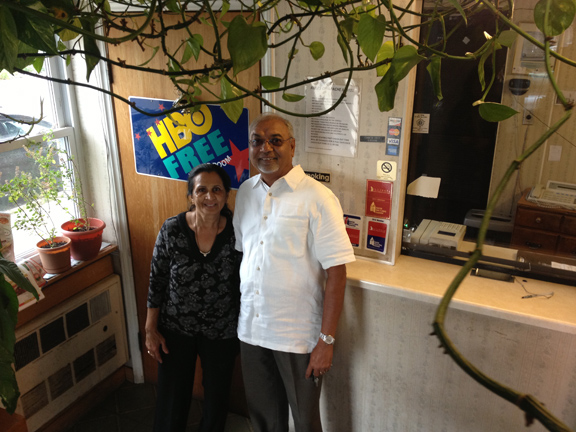 He started with simple renovations: getting rid of roaches, putting up new drywall, and painting the bathrooms. The place was almost falling down, he says, and had no option but to keep the place “nice and clean and comfortable.”

In the ‘80s, Patel installed a security system that would notify the office if someone had unplugged one of the new color TVs. People used to steal them, he says.

More recently, he built a website and installed Wi-Fi.

“I think the clientele is changing every day and their requirement is also changing,” he says. “So you have to stay up with these things. Any person walking in needs Internet, so you have to provide wireless.”

Slowly, he attracted a different clientele than some of the motels around him.

“The clientele was totally local then,” Patel says of the early days. “Nowadays everybody comes from out of state. I have a clientele that comes from Germany to England to Jamaica to Mexico. Everywhere. You’d be surprised in this neighborhood. People know me by the name Patel because they have family that comes here.”

And Patel’s got an unexpected ally: the police station that was built over the former Spa Motel.

“Now, the neighborhood is safe,” Patel says. “Plus, the police department is close by, so people feel safe. Slowly, Lincoln Avenue’s reputation is changing. It’s changed a lot.” 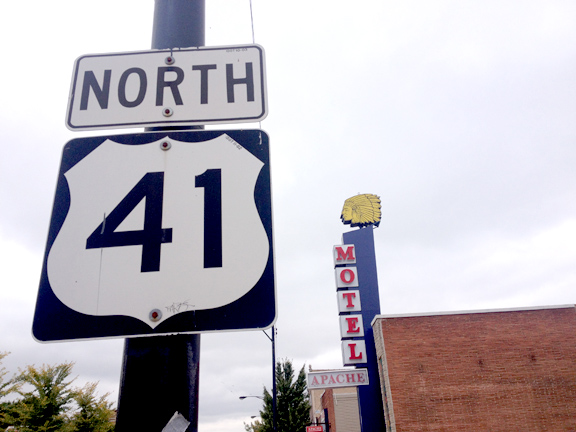 But some things are still the same at the Apache Motel. The motel’s vertical sign (topped with a fiberglass Apache head) has barely changed.

“This is a sign all over and everybody knows the sign, so I didn’t want to change it structurally because this is what the popularity came from,” Patel says.

He did, though, replace the neon with LEDs.

As for the motels’ future?

Well, you can look at it this way: The neighborhood’s still dealing with its history as a traveler’s stop ... only to have modern-day drivers stay away. Ald. O’Connor says he’d still like the motels to disappear, and he’s heard that could happen. This time, though, it would likely happen from private development — not public works projects.

But Nicole, our question asker, suggests her own survival tactic.

“I think there's a huge opportunity if there was a joint marketing effort among [the motels],” she says. “There’s certainly a demand, I would think, for low-cost lodging options in the city.”

Corrections: A typo in this story led to the misidentification of a road name. The correct name is Lincoln Avenue. Original language suggested that U.S. 41 was built in 1926. Much of the route's roads were already in place when the route was designated as U.S. 41 in 1926.