With Chicago’s municipal election less than a week away, we couldn’t help but notice a bevy of questions related to the fact that the races for mayor and city aldermen are settled in late February. In short, a lot of folks suspect that the timing, with the chance of sub-zero temps and snow, amounts to a conspiracy — one that undercuts the whole democratic thrust of the election itself.

Another question-asker, Jesse Ackles, adds: “My cynical take on it is that it really seems to favor incumbents.”

The most concise formulation of the question comes from Eric Sherman, a local campaign worker who’s been canvassing for votes in this nasty cold weather. Here it is:

Why are the Chicago Municipal Elections held in February? What’s the REAL reason?

For the record, Eric’s not entirely sure the timing is a ploy meant to mess with the administration of democracy, but his formulation (“the REAL reason”) resonated with a lot of commenters on Twitter and Facebook.

Regardless, we’re going to clear things up, for sure. But a warning to conspiracy theorists: You’re not gonna like this. It turns out, there’s good evidence that the timing of the February elections was intended to broaden voter participation, not narrow it. Don’t blame us. Just read ahead and then blame the historical record.

On the paper trail

Let’s clarify what we’re talking about when we say “Chicago’s February elections.” Most towns in Illinois hold party primaries on the last Tuesday of February, while the municipal or so-called “consolidated elections” happen on the first Tuesday in April.

Chicago, though, is different. The city holds no primaries for alderman or mayor. Since 1995, mayoral candidates have been elected on a nonpartisan basis. Run-offs are held between the top two vote getters if there is no clear majority. Those occur in April.

Ok, on to the origin story.

The obvious call to make first is to the Chicago Board of Elections. Jim Allen, a spokesman, says Chicago has held its election around this time of year as long ago as 1837.

“The first mayoral election where Ogden beat Kenzie was in May, and ever since then as far as I can tell we’ve been swearing in our mayors in May.”

Of course, this was back when mayors only served one-year terms and City Hall was a saloon. But even Allen, who’s been doing this for awhile, is a little stumped about the origins of the current date.

“The part that’s going to be hard is finding this bridge between May and when it got pushed back to February,” he says. “Is it a political reason that it’s incumbent protection, by keeping the voters at home and turnout low? Who knows. That’s for a political scientist to noodle over.”

Our next stop: Chicago’s Municipal Reference Collection, which resides on the 5th floor of the Harold Washington Library. There, librarian Lyle Benedict begins with relevant passages in the Illinois compiled statutes.

Chicago’s elections, like every Illinois municipality, are set by state law. Except for a few years after the Civil War, these elections were held in April, as set forth in the Cities and Villages Act of 1872.

For most of the 19th century these were elections in name only; candidates that appeared on the ballot were chosen ahead of time by party bosses at state conventions.

All of this changed during the Progressive Era, when reformers pushed to institute open primaries, which would let average party members participate.

The change was hailed as a huge step forward.

On March 7, 1898, the Chicago Tribune wrote about a gathering of 800 young African-Americans at Bethel Church. The esteemed lawyer Edward E. Wilson was quoted addressing the crowd:

“The days of corrupt politics in Chicago are numbered. A few more wise laws such as the new primary law will sound the death knell of the corrupt politician, the ballot-box stuffer, and ward heeler, and honest men will control the elections, and when that time comes honest men will cease to be ashamed to play their part in politics.”

According to Benedict and legislative records, there was another change in the works: These primaries were set for February — more than a month before the April elections. In 1905, Benedict says, Chicago held its first February primary elections.

“Looks like the Republicans were February 14, the Democrats were February 24 and the Socialists were March 4,” Benedict notes, pointing to old election rolls.

These open primaries empowered average voters (at least eligible male voters), but reformers felt it didn’t go far enough. Over the next decade they advocated for direct primaries, which would consolidate all of the state’s primaries — regardless of party — on a single day.

This was a contentious issue, as entrenched party interests sought to preserve the status quo. A Chicago Tribune article from Oct 15, 1907, was headlined: “New Primary Act May Cause Spasm: Measure to be Introduced Today at Springfield Is So Direct That It Staggers Politicians.”

Reformers eventually won out, however, and the day lawmakers selected was the last Tuesday in February. That date has stuck ever since.

At the time this was a radical change, according to Maureen Flanagan, a historian at the Illinois Institute of Technology.

“The parties can’t just hunker down and control everything,” she says, adding that since the general elections were in April, moving the consolidated primaries back to February gave voters a lot more say.

“So if you’ve got, say, 6 weeks, [candidates] have a chance to get out and give speeches, do interviews, and it does in fact make it possible for people to know who the candidates are,” she says.

And, Flanagan says, people felt they now had a voice in deciding who would run the city, which led to an increase in voter turnout. 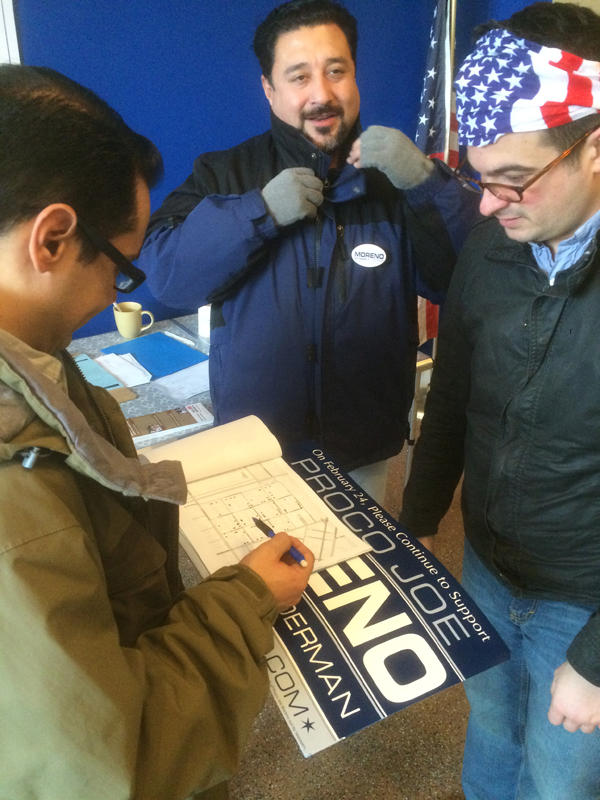 Okay, at this point, we can just say it: The conspiracy theories are dead wrong about why Chicago elections are in February. The timing wasn’t originally created to suppress voter turnout — quite the opposite.

The next question is: Why do so few people remember it that way?

Well, one reason is that — starting in the 1930s — the Democrats have dominated municipal elections. Then, there’s the Democratic Machine, which has been implicated in notorious election shenanigans: Sitting politicians doled out jobs for votes, ballots sometimes were “lost” during key contests, and nepotism often prevailed in the selection of candidates. Little wonder that citizens find the very timing of elections suspect.

Dick Simpson, a professor of political science at UIC, was one of the few independents who was elected to the City Council back in 1971. He says for local ward races, especially, the Machine was hard to beat.

“Aldermanic elections are frequently thrown to the Machine for many reasons: patronage, jobs, favors, corrupt contracts. But the winter weather does not help,” he says.

And yet Simpson provides at least one example of when February’s blustery weather worked against the Democratic Machine.

This was during the 1979 Democratic mayoral primary. The incumbent, Michael Bilandic, faced Jane Byrne. As the two went head to head in January, blizzard after blizzard deposited enough snow to practically shut down the city. By the end of one gigantic snowstorm, Simpson says, Chicagoans could look out their windows and see 5 or 6 feet of snow staring back at them.

These political problems piled up — nearly as high as the snow — until just a few weeks later, when Bilandic went down to a shocking defeat.

While Simpson acknowledges other factors, he says the timing of the election was huge.

“If it had been held in April, Jane Byrne probably wouldn’t have been elected.”

While it’s still hard to campaign during the winter, in some ways it’s never been easier to vote in Chicago.

Echoing the Progressive reforms from a century ago, new rules have extended the early voting period and allowed more people to use mail-in ballots. Starting in 2016, every polling station in the city will have same-day registration.

One last thing to note. Chicago’s average voter turnout for municipal elections hovers around 40 percent. Compare that to turnout in San Antonio, Texas. According to figures collected by the voter advocacy group Fair Vote , turnout in that city’s last few mayoral elections averaged below 10 percent.

Translation? Chicago’s turnout is higher than nearly every other big city — even those in warmer climates, where braving the outdoors in February isn’t so intimidating. 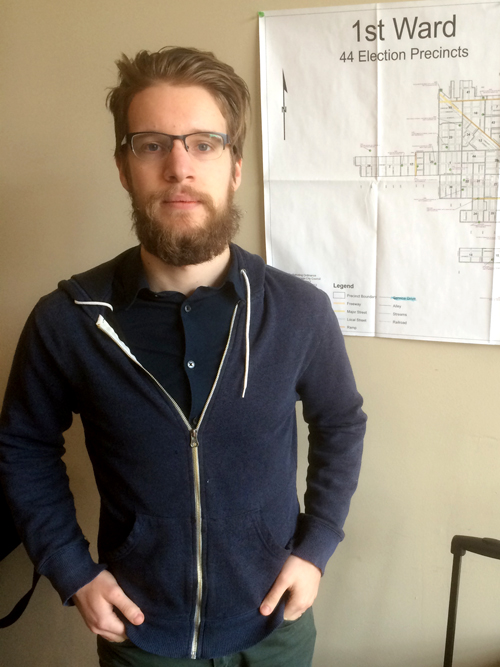 Who asked our question?

We received several versions of this question about the timing of Chicago elections, but the one we got from Eric Sherman accompanied a great backstory. He’s a local political activist and self-proclaimed political science nerd. He’s currently working on Alderman (1st) Proco Joe Moreno’s reelection campaign, which means he’s often going door-to-door in this brutal weather.

“People are nice about it and sometimes they’ll let you in,” he says. “If you can get into an apartment complex, that’s great. That’s a good 15 to 20 minutes where you’re inside a building.”

When we tell Eric how the February election date was originally a reform that encouraged greater voter participation, he gets ecstatic.

“It’s another example of the contradictory nature of Chicago politics," he says. "People get really negative and really pessimistic, and they assume the whole system is rigged. As someone who’s involved in local  politics, it’s not rigged. If it was, we wouldn’t be out there knocking on doors and getting supporters.”