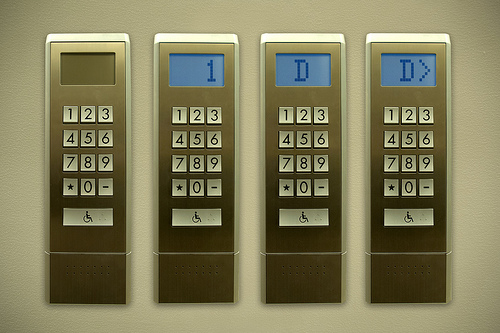 There is a time and a place in this world for diversity, but the elevator system is not one of them.

I used to work in an office building where the elevators operated the traditional way. You press the up button, you get in the elevator and you press your floor number. Unfortunately, the elevators were incredibly slow so, like with an irritatingly out-of-sync CTA bus line, sometimes the elevators would come one at a time, slowly, and would get overcrowded, or they’d all bunch up and there would be four elevators for three people.

So, in an attempt to streamline the system, and at what I presume was at great expense, the building’s managers rehauled the elevator system so that in order to get on the elevator you first told the system which floor you wanted to go to, and then an elevator would arrive and take you there. Still, this system seemed faulty as one elevator would arrive to take a single person to the eighth floor and then another would arrive to take ten people to floors, 8, 9, 10, 11, 12, 13 and 14. But, the point is, we got used to the new system. When someone who wasn’t used to this style of elevator got on, he or she would look in confusion for the number buttons and then, in a panic, try to jump off the elevator while the doors were closing in order to avoid being taken on a ride. Those of us in the know would sigh and roll our eyes in annoyance, because we had a job to get to (that we didn’t really want to go to) and couldn’t be inconvenienced for an extra 13 seconds by some idiot who was raised in a barn where the barn elevators had floor number buttons.

Well, guess what. Now I’m the idiot, because I’m back in a building where elevators function the old-fashioned way but with the added twist of having banks. Once I entered the security doors and pushed the elevator button only to realize that that particular elevator wouldn’t take me to where I needed to go. Not only that, I’m so used to pressing “1” from my office floor that I’ll get on the elevator and stand there like a jerk while the elevator goes wherever it wants to go until somebody else gets on and presses “1,” like I just got on for the ride or I'm too lazy to press "1" myself.

This inconsistency of elevators is making a lot of us look dumb, so I’d like to call for the people in charge (who is that? The mayor? The person who signs the elevator certificate? Mr. Otis?) to just pick one elevator the entire city can ride without getting lost in translation. It will be the Chicago Way. And if we happen to have the embarrassing experience of going to another city where they run their elevators differently (like in St. Louis, where they go in a parabola), we can just shrug and say “Sorry, I’m from Chicago.”