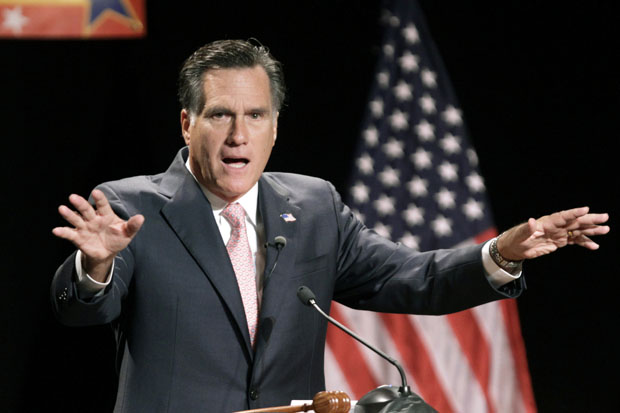 “Republican presidential hopeful Mitt Romney has said he will do ‘the opposite’ of Barack Obama when it comes to Israel.” — The Guardian, June 17

Below, Mitt Romney elaborates on what he meant:

That’s right, my fellow-but-poorer Americans, the very opposite of what Barack Obama has done!

When the president says he supports Israel, I will say, well . . .  I will also say I support Israel but in a way that is somehow the opposite.

When the president says it’s unacceptable for Iran to get nuclear weapons, I will again say the same thing but in a wholly opposite manner. “Iran in weapons nuclear against am I,” for example.

Here in the U.S., Barack Obama does little to support the Israeli people. Yet when he actually goes to Israel, he cowers and lets them dictate everything he does, including reading words from right to left.

That is not the way we in America read, and when I’m in Israel, I will always read left to right!

Indeed, I will not bend to the will of any foreign countries the way Barack Obama does.

We’ve seen the president bow before foreign leaders. Literally bow! When I’m around foreign leaders, I will do the opposite, jumping high into the air as I stand before them, perhaps on a pogo stick.

Here at home, we’ve seen the president kowtow to the pro-environment, pro-gay-rights and pro-union lobbies. When I’m president, I will never kowtow to these lobbies — only to completely different ones.

When I’m president, rest assured, I will be the opposite of Barack Obama in every conceivable way.

Where he is weak, I will be strong.

Where he is opaque, I will be transparent.

Where he is fake, I will be real.

Where he is clockwise, I will be counterclockwise.

Where he owns no book of antonyms, I will bring my copy to the White House.

The president rammed through a health care bill that only pinkos in Massachusetts could support. It mandated health insurance for everybody! Including, unbelievably, people who are very ill.

When I’m president, I will propose a new health-care bill that mandates that nobody in this country can have health insurance except for people in Congress.

The president recently granted what amounts to amnesty for at least 700,000 illegal immigrants.

When I’m president, I will personally carry all 700,000 of those people across the border — on the roof of my car if necessary. (Sorry, the person putting words in my mouth here couldn’t resist.)

The president would like to raise your taxes. When I’m president, I will do the opposite and lower my taxes.

The president has never once placated the wackos on the extreme religious right.

Look, the president leading our country down a path to ruin. Elect me as your president and I will take this country off the path, rent us a private luxury jet and get us to ruin a whole lot quicker!