I have a confession to make. I read plaques.

I like to think it’s because I’m a historian. That’s better than saying I have an obsessive personality.

I do know that, when my kids were growing up, it drove them crazy that Dad was always stopping to read what someone had posted in bronze on the side of a bridge or public building or roadside rest stop. Now that my son and daughter are grown, I only drive my wife crazy.

My subject today is two downtown bridge plaques. The first is on the Columbus Drive Bridge. The key bit of information here is that when the bridge opened in 1982, Jane Byrne was mayor of Chicago. 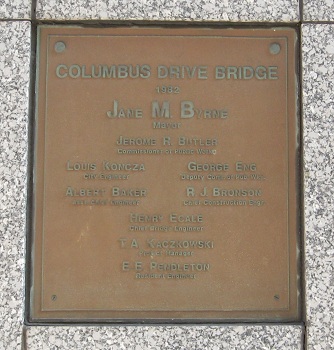 I remember Jane Byrne’s mayoralty vividly, and I would guess that other Chicagoans my age do, too. Yet an otherwise-knowledgeable local 28-year-old recently asked me, “Who was Jane Byrne?”

Chicago’s first female mayor? Conqueror of the old Daley Machine? To many in the younger generation, she is just a name on a bridge plaque — which few people bother to notice.

Now for the second plaque. This one is on the Clark Street Bridge. No, not the big one. The little one under it.

In 1931, Big Bill Thompson was running for re-election as mayor. Meanwhile, the new bridge over the river at Clark Street was under construction. Even though the work was still in progress, Thompson had his plaque put on the bridge. Show the voters what Big Bill was building for them! 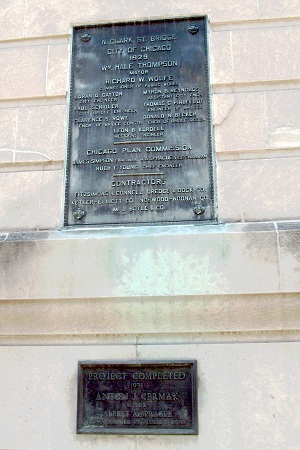 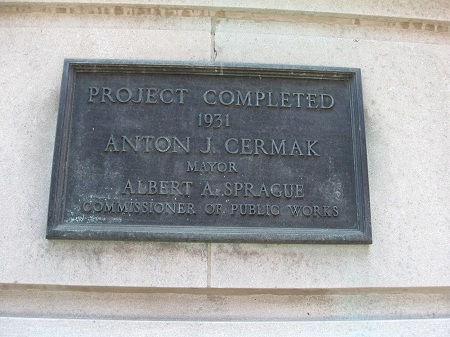 Thompson lost the election to Anton Cermak. When the bridge was finished later that year, the new mayor made sure he could claim some of the credit with his own mini-plaque. It's really sort of ridiculous, and has always reminded me of a “P.S.” at the end of a long letter.

The point of today's post is that we should all take public plaques seriously. Well, maybe not seriously. Still, for anyone interested in history, they are a neglected window into the past. So from time to time, I’ll be visiting some Chicago-area plaques.

I’m on the Board of Trustees of the Park Ridge Public Library. When the voters rejected a plan to build a new library, one of my colleagues joked that we’d lost our opportunity to be immortalized on a plaque.

Is that what politicians are thinking when they propose some massive public works project? I don’t know. But we will be reading those plaques here, anyway.