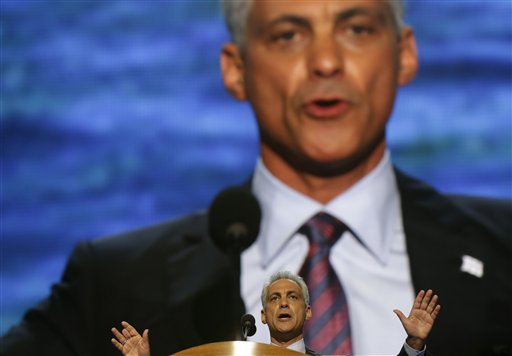 Lead story: Tuesday night was the big first night at the Democratic National Convention with first lady Michelle Obama, Massachusetts Gov. Deval Patrick, and San Antonio Mayor Julian Castro getting the headlines for their impassioned (and in Patrick’s case, fiery) speeches. But a trio of Illinois leaders took to the stage as well, and all three made an impression — though not quite what we could have expected. The usually milquetoast Gov. Pat Quinn must have drawn the short straw in the “who is the attack dog” lottery because he came out firing at the Romney campaign with a show of spirit Illinois residents have seen, well, never. That Tammy Duckworth was well-received wasn’t a surprise but just how well-received was; the Iraq War vet garnered national attention for her excellent speech. (And let’s be honest, crazy uncle Rep. Joe Walsh: If anyone deserves to use his or her military service in campaigning, it’s Duckworth.)

Of course, all eyes in Chicago were on Mayor Rahm Emanuel, who took to the stage to assail the Romney campaign and herald a second term for Barack Obama while side-stepping inconvenient issues – like the spiraling violence and impending teachers strike – that await him at home. Tuesday I mentioned the hypocrisy between Rahm’s place in the party and his anti-union stance. That hypocrisy was underlined in Rahm’s speech, with repeated references to Obama’s support of the auto and steel industries, two very union-heavy industries, something that doesn’t jive at all with his anti-union stance with teachers. (This may help explain why Rahm is so popular with conservatives.) Between the anti-union stance, the tight ties to Washington and his disregard for doing things any way but his way, the current mayor is beginning to sound a whole hell of a lot like the old one.

Also: Remember when I pointed out that the CTA was trying to spray Febreze on its stink-pile of a “de-crowding plan”? Lots of people agreed and they made themselves heard at a public hearing Tuesday night. The hearing — the only one the CTA is holding on the matter, apparently in hopes no one will notice — was full of riders from around the city blasting the plan and the research the agency used to rationalize the cuts. Fewer riders defended the move to “de-crowd” rail and bus lines. But as I pointed out before, these “improvements” don’t even get services back to the level of pre-2010 cuts; instead, they actually take away routes. The CTA can bedazzle the plan all it wants, but underneath the spin, the plan is still just a crap sandwich being fed to commuters.

And then: The announcement that Steve Edwards is leaving WBEZ in two weeks is newsworthy, not only given where he's going (to join David Axelrod’s new Institute of Policy at the University of Chicago), but because of the radio void he’ll leave. (And, yes, I am completely biased, having made a few quick appearances on his current show, The Afternoon Shift.) He’ll certainly be missed on the radio but it’s hard not to feel good for him regarding his new position — it's well-deserved.

RIP: Former North Carolina congressman Charlie Rose, a Democrat and great defender of tobacco farmers, at the age of 73, from complications due to Parkinson’s disease. While Rose was far more liberal than some of his fellow party members from the South, he did break with the party over a proposed hike in the tobacco tax that would have funded the Clinton administration’s health care plan. He retired in 1996.

Proof that those carnival games aren’t rigged. You’re just really, really bad at them. [via The Daily What]