On a recent afternoon in Chicago’s Albany Park neighborhood, Linda Seyler chirped at a small crew of helpers from Nepal: “Stay there,” she said to a group ranging from small boys to grown men. Seyler pulled out a measuring tape as she knelt in a tarp-covered ditch. “From here to here is two feet…”

Seyler was helping two more refugee families measure out their new vegetable plots at the Global Garden Refugee Training Farm, located on busy Lawrence Avenue. It was a cool Sunday, but several families were there, eager to start preparing their long, skinny garden beds for spring planting.

Janet Saidi, a Congolese refugee who came to Chicago more than a year ago stood next to her family’s plot, number 95, rattling off what she’s grown. “Onion, okra, beans,” she said. “The name of this one I don’t know. It’s like mushroom? Yes.”

Saidi and the other refugees who garden here all farmed in their native countries. Most hail from conflict-ridden places like Bhutan and Burma, and often don’t know any English when they arrive. With the language barriers and the sense that their farming skills have no use in a big, American city, many battle feelings of isolation as they try to settle in.

“Being here (in the city) they feel themselves really worthless,” said Hasta Bhattarai, a Bhutanese refugee who now volunteers as an an interpreter for some of the gardeners. “But once they are here (in the garden) and once they are able to produce something, that really makes them happy from inside,” he continued, “and they feel themselves (like) they are back home, and that gives them some kind of spiritual happiness.“ 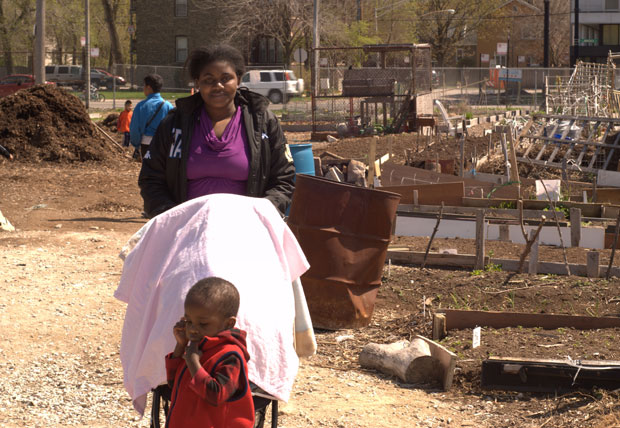 The garden began with a grant from the Refugee Agricultural Partnership Program, under the federal Office of Refugee Resettlement. Seyler, at the time working for the Coalition of Limited English Speaking Elderly in Chicago, applied for the three-year, nonrenewable grant. In its first year, the garden had 42 families with plots.

Now in its third growing season, the garden has more than 100 vegetable beds jammed haphazardly against each other, with additional areas reserved for new commercial plots and a quarter-acre reserved for use by the Peterson Garden Project. In all, the refugees use about one acre of the 1.33 acre area. They grow bittermelon, bok choy, okra, mustard greens, and roselles -- a plant related to hibiscus. It’s a cheap and convenient way to find the vegetables that they traditionally use for cooking, which may be less common in U.S. supermarkets.

“This garden, it’s really changed my life,” said Mary Thehtoe, a Burmese refugee whose family had a large farm in her native country. Thehtoe got a plot at the garden when it began, during her first year in the U.S., in 2012.  She said at that time she knew no English, and cried every night after she came to the U.S., until she met her refugee case worker. That was the first person she met in Chicago who spoke her language.

“If I don’t have garden, I always go to the appointments,” Thehtoe said through an interpreter. “I have a lot of appointments, like medical appointments, And I stay working at home, and just do house chores, take care of my kids, those kinds of thing. When I got the garden, all the sickness and stress, depression, go away, Because I always think about the garden.”

Thehtoe said she comes to the garden every day.

Saidi said she never imagined that in the U.S. she would be growing her own food, as she did in the Congo. “When I came here, I said, ‘Oh my God, I don’t know (if in) America, if they have fresh food,’” she said. “Yes, they are also farming, and I said ‘Oh my God,’ it was exciting.”

The garden’s success has earned attention from the Governor’s office, which wants to replicate it in places like Rockford, Elgin and Aurora. Meanwhile, the grant that started the garden has run out. Its organizers are planning to make the garden self-sustaining with commercial production and an expansion of the farm’s community supported agriculture program, which allows individuals to buy “shares” in the garden’s seasonal produce.

Correction: This article incorrectly referred to the Peterson Garden Project. It has been corrected.