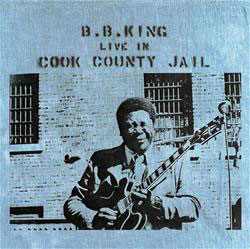 B.B. King, who died late Thursday at the age of 89, was from Memphis by way of Mississippi. But Chicago played a special role in the blues guitarist’s career.

He held countless concerts and recorded three seminal albums here including “Live at the Regal Theater,” “Blues is King” and the iconic “Live in Cook County Jail.”  That album came from an unusual concert before a 'captive' audience.

Recorded on a hot day in the fall of 1970, the setting was the yard at Cook County Jail. As King plugged in his famous guitar Lucille, around 2,000 inmates began cheering and jeering. The jeers weren’t for King, but the Sheriff and Chief Judge at the time. This was back when Cook County was called ‘the world’s worst jail.’

Winston Moore, the country’s first African American warden, was brought in a couple years earlier to institute reforms. In his autobiography, King writes that it was Moore’s idea for him to perform at the jail.

Ron Levy was an 18-year-old keyboardist touring with King’s band then.

“At first it was kind of exciting,” remembered Levy. “[But] once those iron doors slammed behind you it was like ‘oh man.’ I had reservations about our decisions.”

However, once the music started, he said all their fears fell away. Levy said the band played lots of jails and prisons back then — for a good reason.

“If anybody had the blues, it was those people incarcerated. And B.B. really felt compassion for these guys,” said Levy. “And let’s face it, a lot of the people who are incarcerated, they were in his audience at one point or another.”

When it was released the next year, “Live in Cook County Jail” topped the R&B charts for three straight weeks. Rolling Stone magazine includes it in their list of 500 Greatest Albums of All Time.

But for Ron Levy, King’s legacy isn’t about record sales or charts.

“People don’t realize B.B. King was much more than just a musician and entertainer. He’s a human being, a humanitarian. He cared,” said Levy. “He’s one of the really good guys. There aren’t  many like him in history. He’s not just the king of the blues. He’s one of the kings of humanity.”