There’s a fight brewing in Albany Park over who gets to live there.

Arturo Chavez would like to stay in the North Side neighborhood, where he’s lived for roughly three years — but that seems increasingly unlikely.

“I go around in a car, looking for places,” he says, speaking in Spanish. “I see ads, and I call the numbers. Some places were being remodeled. I was told they were going to rent it, but later they told me they had already leased it to family members.”

Chavez is one of the few remaining tenants of 3001 W Lawrence Avenue, a courtyard apartment building with 32 units. In August, new owners bought the building and notified its tenants that they were all to be evicted. The plan is to gut rehab the units and turn them into upscale rentals.

Inside, ceiling pipes have started to leak and parts of the walls are falling off. Chavez, a car mechanic who has been fighting for workers compensation since he was injured last year on the job, knows he’ll have to leave soon. But he says he hasn’t been able to find another place nearby that comes close to the $700 monthly rent he pays now.

“The rents are too high and that means people are being separated and they’re moving to areas farther away,” he said.

Antonio Gutierrez, an organizer with the community group Centro Autonomo in Albany Park, says scores of low-income Albany Park residents have been pushed out in recent years. Just like Chavez, they’ve been unable to keep up with the rising rents and property values in some areas.

“I would say about 40 percent of them, they ended up having to leave Albany Park and having to move outside the city to suburbs,” said Gutierrez.

Between 2011 and 2013, the median home price in Albany Park rose almost 40 percent. Gutierrez says after the recession, speculators flocked back to the neighborhood, buying foreclosed homes and driving up property values.

“(The rent) would just be the taxes for the property, the insurance for the property and a maintenance fee,” Gutierrez explained. “And they can stay there for as long as they want.” 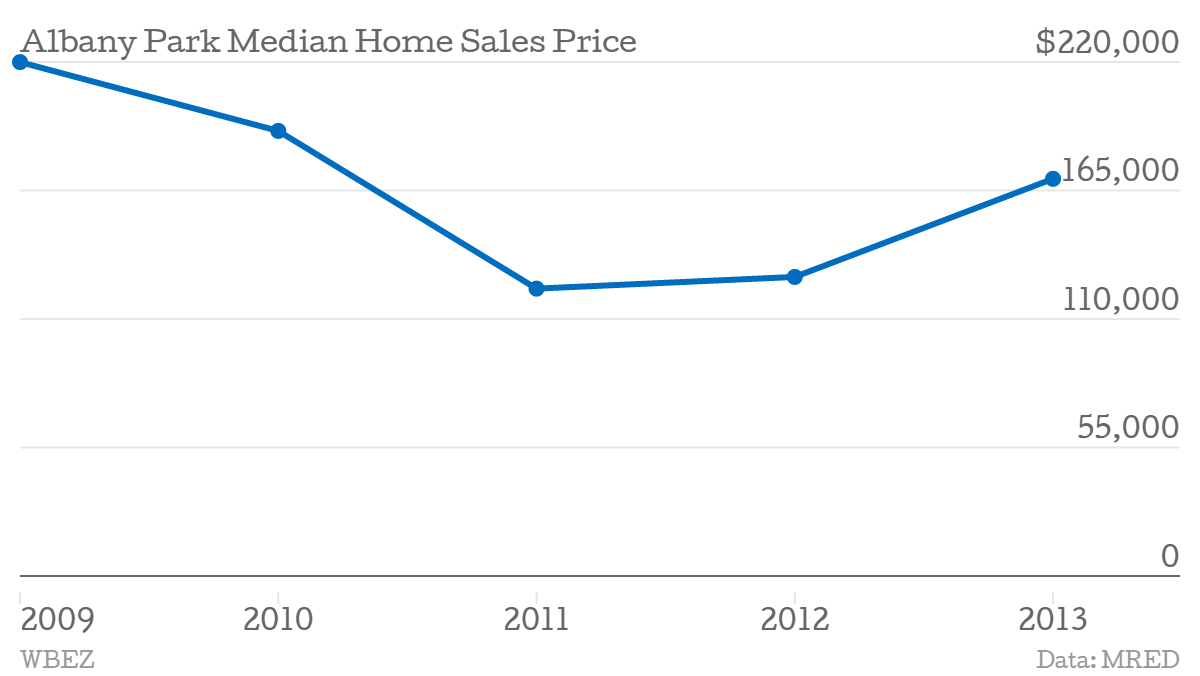 The concept of community land trusts is not new to the Chicago area. Gutierrez’s variety is a slight twist on something that’s been tried before, just a few miles south, in West Humboldt Park.

There, three, red brick single family homes sit on a residential street next to the noisy Union Pacific rail line.

Under Howard, the Council created the First Community Land Trust of Chicago, also a non-profit, in 2003. He said residents at that time were worried their neighborhood might become unaffordable. With the alderman’s support, the land trust bought city property for $1 and built the 3-bedroom homes.

“Were it not for these spots, the gentrification would have just swamped everybody,” said Howard. “A lot of people would have moved out.”

Howard’s land trust follows a more conventional model than the one in Albany Park.

Instead of renting the homes, it offered them for sale.

Howard said three things keep land trust homes affordable. First, homeowners don’t buy the land; they only buy the house itself. That means the house sells for much less than its market value.

Second, homeowners have to agree to resale restrictions.

“Even if the homeowners decides later on they want to sell the home, they must sell it to someone of a like economic profile,” said Howard. “Otherwise the land trust goes bust.”

In other words, homeowners have to sell the home to someone that qualifies as low-income. That keeps the resale price of the house low.

Finally, homeowners only pay property taxes on the value of the house, not including the land.

Howard originally wanted to build ten homes, but the timing didn’t work out.

“We only got three up,” he said. “I don’t think anyone at that point had any idea that the recession would last as long as it did or be as deep as it was.”

During the recession concerns about gentrification in West Humboldt Park fizzled out.

The First Community Land Trust of Chicago still exists, but only to collect the nominal monthly ground lease from the three homeowners in those homes. Property values in the neighborhood dropped so much after the housing bubble burst that it doesn’t make sense for the land trust to build additional homes.

But there is another Chicago-area land trust that’s flourishing. It’s north of the city, in Highland Park. Luisa Espinosa-Lara and her family once struggled just to rent in this wealthy suburb.

“We thought OK, one day (when) we are able to buy a house, it’s not going to be here,” she said. “Houses here are so expensive.”

But thanks to Community Partners for Affordable Housing, Illinois’s oldest and largest community land trust, Espinosa-Lara and her husband were able to buy a three-bedroom house in Highland Park. They paid $175,000 for it, roughly half of its market value.

“It was like when you feel that you win the lottery, but like you get millions,” she said, “because you don’t have to go. And I think it’s so painful when you have to leave.”

That’s what Antonio Gutierrez hopes to do back in Chicago’s Albany Park neighborhood. But he’s taking on a big challenge. Community land trusts typically need hundreds of thousands of dollars in startup costs, to buy, renovate or build homes. Most of them rely on a mix of public grants and private donations.

Casas del Pueblo doesn’t have that kind of money, so Gutierrez hopes to persuade banks to donate foreclosed homes to the community land trust. So far, this strategy has yet to bear fruit.

“Every single time I get to a meeting with a bank, the first thing they ask is how many houses do you have now? How many houses are you managing? And when we say zero, they close the door,” he said.

He believes once they have a couple of homes, others will look to his community land trust as a model for how gentrification can benefit even those it would normally displace.