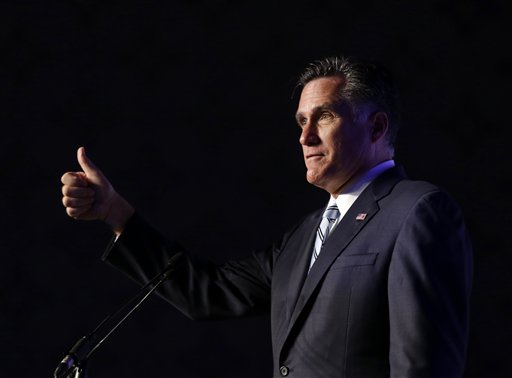 Lead Story: Mitt Romney might stand a chance of winning this election – but only if he keeps his mouth shut until Election Day. First there was that misfire regarding the attacks on the U.S. embassy in Libya last week, a reaction that drew criticism even from fellow conservatives. Then there was that less egregious whoopsie-daisy in which Romney said “middle-income” means you make between $200,000 and $250,000 a year, just as the Census Bureau reported the real median income in the United States is $50,000 a year. Now comes video from a fundraiser earlier this year during which Romney unloaded on Obama’s base. The speech is full of quips that could prove a headache for the candidate but none more damaging than this:

There are 47 percent of the people who will vote for the president no matter what. All right, there are 47 percent who are with him, who are dependent upon government, who believe that they are victims, who believe the government has a responsibility to care for them, who believe that they are entitled to health care, to food, to housing, to you-name-it. That that's an entitlement. And the government should give it to them. And they will vote for this president no matter what…These are people who pay no income tax.

Snap. Setting aside the bit about income taxes and Romney’s own issues with that, it’s interesting to hear him admit that he can’t win more than 53 percent of the popular vote. And buried in the video beyond that most sensational passage is a swipe at Latinos, which our own Achy Obejas has an excellent take on. Of course, as Mediaite points out, had this come from a campaign insider or pundit, it would have been dismissed, “Because, in campaigning and electioneering terms, it is 100 percent accurate.” Romney briefly defended his comments and the context of the comments at a press conference Monday night.

The debates should be interesting.

Also: It’s going to be awful hard for Chicago rapper Chief Keef to claim his social media account was hacked this time. Keef is in hot water with photo sharing service Instagram for posting a photo of himself receiving oral sex from a young woman. Instagram subsequently banned Keef who then wondered aloud on Twitter “Why dost thou photo app remove thy photos?” except with more swearing. He then expressed his admiration for a particular kind of woman and probably set about getting into trouble yet again. . . until some sort of authority figure in this young man’s life decides enough is enough and at least takes his phone away.

And then: There’s trouble in Halas Hall. Anyone who watched last week’s Bears-Packers game already knows that. But now there are sparks between players as one Bear has publicly criticized the behavior of alternately worshipped and maligned quarterback Jay Cutler. Cornerback D.J. Moore called Cutler out for bumping and verbally berating offensive tackle J’Marcus Webb during Thursday’s trouncing, calling the actions “wrong” (Webb hasn’t complained about the incident himself). All the drama overshadowed the good news that Matt Forte’s ankle injury is not as serious as was previously suspected.

RIP: John Ingle, character actor, from cancer at the age of 84. Ingle began his career as a high school teacher but began earning small TV roles in the early ‘80s, eventually landing a major role on General Hospital. He’s probably recognized most by non-soap opera fans as the principal from Heathers; most recently, he’s appeared on NBC’s Parks and Recreation and The Office.

Finally
Though he died almost a month ago, NASA has now shared this stirring video tribute to Neil Armstrong.