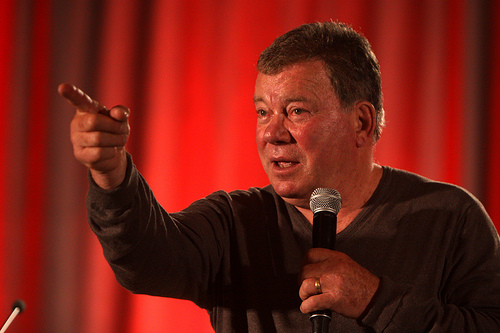 I admit it: when I first saw this show announced in September I instantly called for tickets.  I was a Captain Kirk freak when all the cool kids were into Spock; I watched TJ Hooker just to hear the leading man say “Dirt Bag.”  I owned a bootleg of Star Trek outtakes and another of our hero's bizarre interpretation of “Rocket Man.”  I’ve even seen the unspeakable studio version of The Brothers Karamazov because his Alyosha looks so cute in a cassock. So naturally I’m prepared to drive an hour out to Aurora and an hour back to see William Shatner do whatever it is he’s going to do in this one-man one-night-only show.  It could be Priceline commercials (or even Promise commercials) for all of me.  If you share my passion for the King of Self-Deprecation, the Master of the Unmotivated Mid-Sentence Pause, the ex-Shakespearean actor with the grace not to mourn his lost serious career for the phenomenal silly one he’s had, I don’t need to tell you: it’s going to be well worth the Friday rush-hour drive.

Or if you’d rather hear singing by people who can actually sing, coupled with swing dancing by people who can still swing, check out the world premiere of this new play “infused” (as the company says) with music and dancing of the 1940s.  The play itself (not actually a musical) features renegade Air Force pilots, grasping bartenders, war profiteering and (as the company says) “sex, betrayal and murder.”  Just good clean fun with which to start the year.