Is Sheryl Sandberg the most radical feminist to ever challenge the status quo of a man's world? No, but she is a powerful force in changing the way women feel about their own capabilities as leaders.

Sandberg spoke to a sold-out crowd at Chicago's Palmer House Hilton Thursday evening, in an event sponsored by Nielsen and presented by Trib Nation as part of the Chicago Tribune's "Press Pass" speaker series.

In a conversation with Tribune vice president and associate editor Joycelyn Winnecke, Sandberg shared advice and anecdotes from her new book, Lean In: Women, Work and the Will to Lead, which has already stirred debate and provoked a backlash from some of Sandberg's female critics. In her book, Sandberg argues that women may be the ones holding themselves back from true gender equality in the workplace. She says that women need to "lean in" and "sit at the table" with their male peers in order to acheive the same levels of success.

During her talk, the effervescent Facebook COO (and multi-millionaire) elicited knowing laughter and spontaneous applause from her overwhelmingly female audience, as she delivered one quotable nugget of "girl power" inspiration after another. Here are a few of her most memorable soundbites: 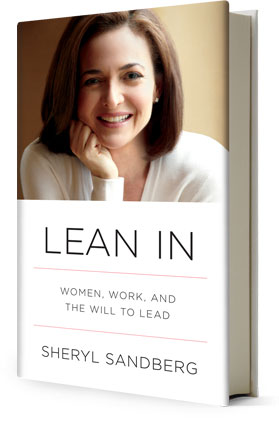 - On the Marissa Mayer controversy at Yahoo:

"If a man did it, there would not be a single headline."

- On the self-confidence of women in comparison to men's:

"Women remember their performance lower, and men higher, in relation to their success."

- On the difficulty of finding a mentor as a young woman, especially when most seasoned pros in corporate America are older men:

"Searching for a mentor has become the professional equivalent of waiting for Prince Charming."

- On her desire for less restriction and more equality in gender roles:

"We need to teach our girls to be leaders and our boys to be nuturers."

Sandberg also described how assertive girls are often teased for being "bossy," a derogotary term that is never applied to boys when they attempt to take on similar leadership roles.

"I wrote this book for every young girl who has ever been called 'bossy' on the playground," said Sandberg, which made the bossy-pants Hermione Granger in me exclaim, "Hear, hear!"

Audience members were encouraged to tweet with the hashtag #TribNation during the hour-long event (Sandberg is a social media maven, after all) and Twitter users responded with a flurry of feminist discussion that continued long after Sandberg left the stage around 7 p.m.

And while the Internet mogul still has her critics, the palpable surge of female empowerment in the room last night proves that Sandberg's message of "let's change the conversation from what women can't do to what they can" has earned her many loyal fans here in Chicago – this sometimes-cynical blogger included.

Watch the full event here, courtesy of the Chicago Tribune.