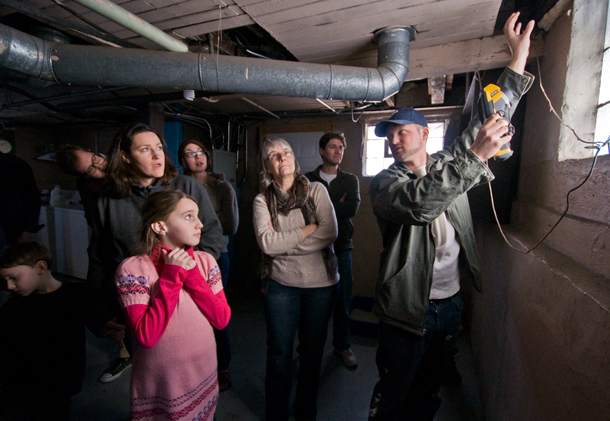 The Avondale home of artists Marvin Tate and Lucy Mueller has a certain kind of warmth — the couple’s art fills their brightly painted rooms, which are replete with found objects, sculptures and photographs. A look through an infrared scanner, however, shows the building’s coziness belies its abysmal energy efficiency rating.

Tate and Mueller weren’t alone when contractors told them Saturday that their home leaked 69 percent more air than recommended. The two had gathered a small group of friends and neighbors for an energy efficiency “house party,” agreeing to host a short presentation by Energy Impact Illinois representative Rob Geltner in exchange for a free energy efficiency assessment.

Energy Impact Illinois is a partnership between non-profits, utilities, the state of Illinois and the federal government that promotes energy efficiency retrofits. Since last fall the program has offered instant rebates to homeowners who undertake substantial retrofits using approved contractors. That money comes from the American Recovery and Reinvestment Act.

“We’re trying to get some of the stimulus money back in the hands of the homeowners,” Geltner said. The average cost of air sealing and reinsulating a leaky home, he told the group gathered Saturday, is $2500, but Energy Impact Illinois offers rebates up $1750. Retrofitted homes typically save $500 each year on their utility bills, offsetting the out-of-pocket expense in less than two years. And the home becomes more comfortable immediately.

Part of the program’s strategy is to target only the most cost-effective solutions. That’s where the certified contractors come in. Replacing a home’s leaky windows, for example, can cost tens of thousands of dollars and yield a relatively minor improvement if the building isn’t first properly insulated. If retrofitting a home is like a series of visits to the doctor, the initial assessment performed Saturday includes a physical and a possible prescription. Contractors will do a check-up after the homeowner goes through with any retrofit work. 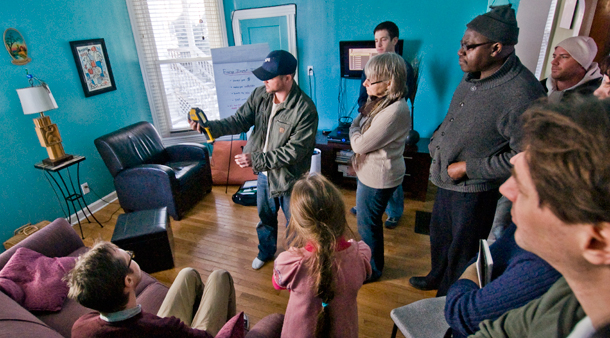 Anthony Stonis, president of Building Energy Experts, pointed to an infrared image of Tate and Mueller’s bathroom wall — blue, green and yellow splotches clustered around the window like bruises, revealing where the house was losing heat. The workers who built the home’s addition, which houses the kitchen and bathroom, did not properly seal the building. It’s a common mistake, Stonis said, to assume that insulation alone is enough to retain heat. If the building isn’t sealed, however, air will find a way out.

“Think of it as going out on a cold day with your puffy jacket on but not zipped up,” Stonis said, making his way down to the basement. “We want to zip it up and then put another jacket on over it.”

Part of the city’s Retrofit Chicago initiative, Energy Impact Illinois has begun to make headway in reducing energy waste among the region’s aging building stock. Stonis said about a quarter of his customers come through the program. Approaching a kind of fiscal cliff when the Recovery Act grant money tapers off this spring, however, Energy Impact Illinois and similar initiatives around the country face an uncertain future.

Until then, Geltner said, they will focus on expanding the program’s reach. They have tried traditional advertising, but “house parties” like Tate and Mueller’s have been much more effective. Word of mouth is poweful, but so is the scope of the problem they hope to address; the nation's single-family homes contribute nearly as much as transportation to our collective carbon footprint. 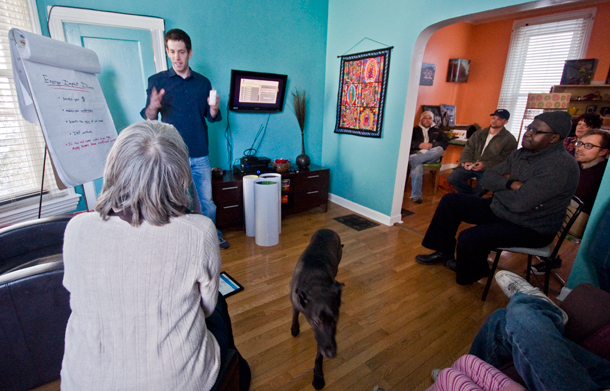