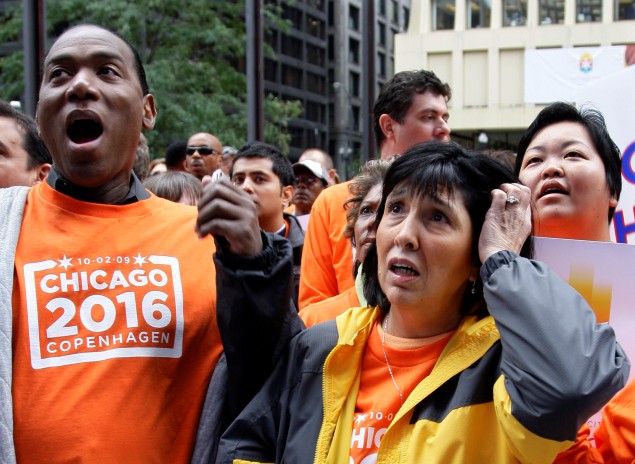 Lead story: I should have known this was coming, what with the London Olympics being a success and all, but still, it rankles. There are still a few folks out there – even the usually clear-minded Eric Zorn – floating the idea that Chicago should re-bid for the Olympics in 2024. Since some people still don’t get it, let me break it down for you: NO. Stop trying to get the Olympics back in Chicago. It was Mayor Daley’s pipe dream; let it stay buried with all of the fake voters whose ghosts helped elect Machine candidates. There are far more important things to take care of right now, like the school system, the public transit system and that whole city debt thing. Oh, and that pesky “violence” issue; people from outside the city do notice that sort of thing. So, please, stop bringing this up. Let it go, move on – just pretend it never happened.

Also: The presidential campaign is truly heating up because we just entered “completely stupid” territory. Conservatives are taking First Lady Michelle Obama to task over her playful banter with gold medal-winning gymnast Gabby Douglas on The Tonight Show. Conservative blogs in particular hammered Obama for playing a “food cop.” The whole “Gabby’s hair” issue was ridiculous enough and now conservatives are politicizing a mundane quip on a boring talk show? Of all the other things we could be having public discourse about? That this is even a thing makes me want to light myself on fire.

And then: So remember when Brian Urlacher said he was going to be totally okay for the 2012 season? And remember when reports of his knee procedure hit yesterday, giving Bears fans a collective coronary? In the bright light of a new day, it seems that it all may be OK after all, as team officials swear up and down Urlacher will be on the field come the opening game on September 9. It’s not the first time Urlacher’s been injured, which is reason enough to give fans pause; but there’s also the Bears keeping his condition shrouded in secrecy. Still, there’s no need to panic, Bears fans; if Urlacher’s injury doesn’t give you an underwhelming season, something else will.

RIP: The world has lost another Sweathog. Ron Palillo, also known as Horshack from Welcome Back, Kotter, passed away Tuesday of a heart attack at the age of 63. Besides his Kotter role and other TV appearances, he also had an extensive stage career, appearing in productions of Amadeus and others plays – a far better way to remember Palillo than his appearance on Celebrity Boxing.

Elsewhere: United Airlines lost a kid at O’Hare and didn’t care enough to help find her … Irony, defined … Obama confirms he is a wizard, casts Abraham Lincoln as his patronus … My old A.V. Club colleague Nathan Rabin once again visited the annual Gathering of the Juggalos and, once again, wrote a riveting recap … New Yorkers prove they do have a good sense of humor, after all.

Looking ahead: I’m shocked – shocked, I tell you – that the prosecution in the Drew Peterson case has once again screwed up, leaving the judge to ponder a mistrial … The strange story of a woman found dead at a Gold Coast motel continues to unfold now that the woman’s past charges for prostitution have come to light … Despite the concert's infamous Saturday evacuation and another year of mud pits, the cost of repairing Grant Park post-Lollapalooza this year is estimated at $150,000, way down from the $1 million spent last year … President Obama’s new immigration policies start rolling out today.

Sports: Bears fans can already start worrying about Jay Cutler’s contract running out after the end of next season … Chris Volstad’s winless streak hits 23 games; his last win was over a year ago … Oh, hey, the NHL is undergoing labor negotiations. This should end well … Sam Smith shows the White Mamba some love.

Finally: I pick on Bears fans but, deep down, I love you. I’m just bitter about my own team’s plight right now. And to show you how much I really do love you, enjoy the below commercial (and see more here). [via Gapers Block]