Russia says it has carried out at least 20 airstrikes in Syria. But many of those attacks hit areas miles from the ISIS strongholds that were initially named as targets. Syria's opposition says Russian forces are hitting any opponents of President Bashar al-Assad — and that civilians are paying a price.

"We want clear condemnation for the Russian brutality, and we want protection for the civilians," Khaled Khoja, leader of the anti-Assad Syrian National Council, said at a news conference in New York.

Criticism that Russia is targeting rebel groups in Syria began soon after the airstrikes started Wednesday.

From Moscow, NPR's Corey Flintoff reports, "Kremlin spokesman Dmitry Peskov told reporters that the targets of Wednesday's airstrikes were chosen in coordination with the Syrian government."

Corey adds, "Russian Foreign Minister Sergei Lavrov told reporters that they should rely on Russia's defense ministry for information about the strikes, and not on the Pentagon."

For U.S. leaders, the airstrikes have stoked concerns that the Russian airstrikes would be used against not only ISIS, but also against moderate rebel groups — including ones that have received U.S.-backed training and support. 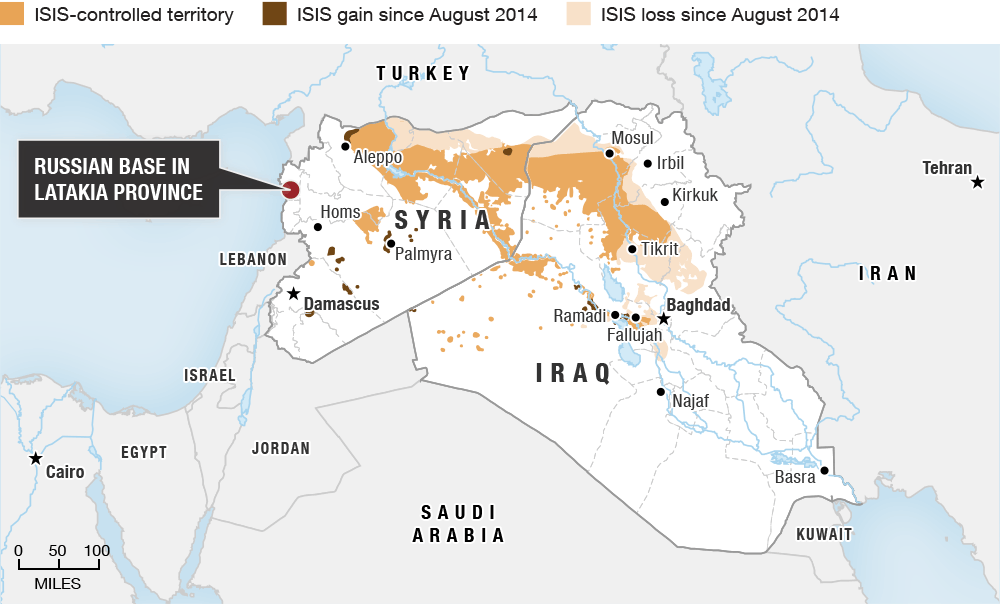 "While at least two of the strikes targeted areas of Homs close to where the Islamic State is trying to expand westwards ... the remainder of the strikes targeted a pocket of anti-government militant control to the north of the city of Homs and on key front-line positions. These positions are where militants, including the militant Islamist coalition Jaish al-Fatah, are attempting to expand and advance from Idlib governorate into the Latakia coastal region — the bedrock of the government's support base."

The airstrikes began Wednesday, only one hour after a Russian official alerted the U.S. military that warplanes would begin flying missions in Syria. U.S. and Russian officials say they'll open communications between their military groups in the region, to avoid accidents or potential clashes.

In launching the airstrikes, Russian President Vladimir Putin said he wants to prevent ISIS from increasing its influence in Russia. According to Richard Barrett, the former director of global counter-terrorism operations at British MI6 intelligence service, more than 2,400 Russians have gone to fight for ISIS in Syria — and the violent group has established itself in the northern Caucuses.

Putin's plan "doesn't make very sense," Barrett says, "because it's easy to get into these things, but it's difficult to get out. Maybe he doesn't want to get out. But the point is, though, I think Russia... realizes that Assad's government is on the skids. It's not going to survive, and certainly, there's absolutely no hope of if regaining control over the whole of Syria."

Russia says it has more than 50 aircraft in the air group that's taking part in the strikes, and that the base they're using in Syria is being guarded by a battalion of marines. The Russian operation is relying on drones and satellite data, reports the state-run Tass news agency.

A summary of the airstrikes that was released by Syria's state news agency listed many targets near the city of Homs in western Syria, an area known for anti-government sentiment that is far from ISIS strongholds such as Raqqa or Palmyra.

In Syria's new report of its military action released Thursday, the country says its forces hit "Takfiri terrorist organizations" — using the Arabic term for extremist Sunnis — in areas such as Quneitra province (in Syria's southwest corner below Damascus) and Aleppo province. The bulletin says many of the attacks targeted Jabhat al-Nusra, the al-Qaida affiliate in Syria.