A pair of police officers on Chicago’s South Side are helping teens learn radio production in an effort to keep them off the streets and improve their views on cops.

The program in the Englewood neighborhood fits with a push by Chicago Police Department Superintendent Garry McCarthy to improve the relationship between police officers and the people they serve.

It is called the 7th District Youth Anti-Violence Media Program. It introduces teens to the ins and outs of radio production, and gives them a chance to get on the air.

The classes are held three days a week at Kennedy-King College. The broadcasting instructors there pitch in to teach the kids.

The program was started by Daliah Goree-Pruitt and Claudette Knight, both community policing (or CAPS) officers. The two started out as beat cops. Now they are in charge of neighborhood outreach, counseling crime victims, and running community meetings  in a neighborhood struggling with some of the highest crime rates in the city.

The two had a lot to do already. Knight and Goree-Pruitt also do a weekly food give-away and hand out turkeys before Thanksgiving. On the Saturday before Christmas, they gave away toys at the station house located at 1438 W. 63rd Street.

But 7th District Deputy Chief Leo Schmitz came to them last spring with a new task.

“He was like, ‘Think of something that we can do for the kids,’” Goree-Pruitt said.

Schmitz was worried about the summer then coming up, when hot temperatures and idle teens could contribute to a spike in violent crime.

Knight said they wanted to do something new.

“You know, something different, some other added activity because you always hear basketball, baseball, but not all kids are sports-inclined,” Knight said.

They wanted to do a swim program, but they could not get the funding. Goree-Pruitt said the only thing the department had money for was t-shirts for the participants. So Goree-Pruitt and Knight needed partners. 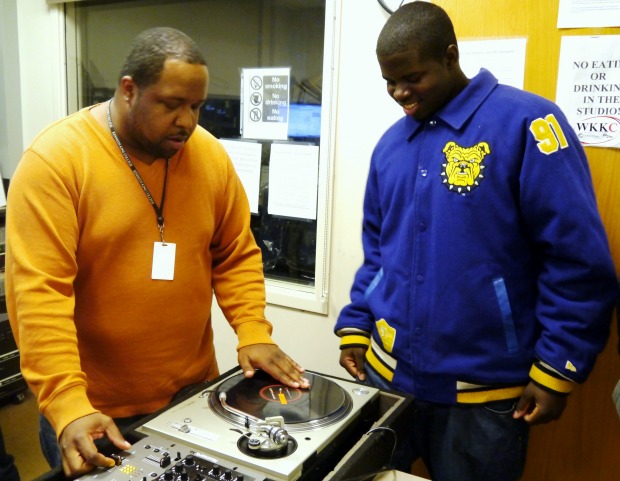 Kennedy-King College, about a mile west of the 7th District station, has a broadcasting department and its own radio station, WKKC. Knight said it was the “perfect opportunity.” They approached the college and got the OK.

So all they needed were students. This turned out to not be easy. The two went personally to high school principals in the area, asking them to recommend students for the program… and they got almost no response. Then they asked area pastors - again, nothing.

So Goree-Pruitt and Knight just started approaching random kids on the street and around the neighborhood.

That’s how Genavie Clark heard about it.

Ultimately, the two got 20 teens of high school age for that first summer class, and it went so well they did a smaller after-school version this fall.

The program gets by mostly on the power of Goree-Pruitt and Knight’s charisma, which is considerable. But these two career cops know nothing about radio production, and they do not have any money to pay instructors.

So the students learn mostly by observing WKKC in action.

The kids are exposed to a lot of the skills that go into producing a radio show: hosting, logging tape, mixing audio - even DJ-ing.

Station manager Dennis Snipe comes in every once in awhile to talk to the students about diction and public speaking, the assistant program director lets them look over her shoulder while she logs tape, and the hosts give them pointers during music breaks.

The summer classes were from 9 a.m. to 1 p.m., so the students had to be fed. The owner of a shopping plaza across the street from the station donated Subway sandwiches.

So it’s a nice story. But at first glance, none of it seems much like police work.

“It’s all about community interaction, because the youth especially, most of their interaction with the police is negative. So if you start introducing a positive interaction at a teenage level, then they start to view us in a different way,” she said.

WBEZ ran a story on Dec. 23 about police legitimacy training: thousands of Chicago cops re-learning how to best interact with the people they serve.

Efforts such as the radio program and legitimacy training fit with Superintendent McCarthy’s priority on what he calls a return to community policing.

A recent study by Yale criminologist Andrew Papachristos found that Chicago in 2013 has had its lowest violent-crime rate in the past three decades. McCarthy credits community policing with a decrease in crime.

Goree-Pruitt believes it’s part of her job to connect with people.

“I feel like I can help these kids. I may not help all of them, but the ones that I can help, they’ll know the police department just don’t lock kids up,” she said.

Besides teaching them how to produce a radio show and to like cops, the officers use the class as a way to help the students deal with their own issues. They talk to the students about resolving conflicts, safe sex, and staying out of trouble.

Before they start the radio lessons, the students gather around a round table in a small windowless room across from the WKKC studios.

One of the girls is talking to Goree-Pruitt about problems she is having with her stepmom. She says her dad is getting a divorce, and he blames her.

Goree-Pruitt councils her on being the mature one, even though her stepmom is the adult.

“I’ve had the same issues, having two parents to living with just my mom, to my mom getting remarried, to my mom getting rid of all four of her daughters to be with this new husband, to my dad raising four daughters by himself. So I am no different from you all. Like I tell you all, because we’re the police doesn’t mean that we’re not human,” Goree-Pruitt told them.

Goree-Pruitt and Knight look tougher than they sound, and they both spent time on the beat, dealing with high-stress situations. But they also have families of their own, so maybe it is not surprising that they connect so well with teens.

“When I come here it just, all my stress just goes away,” freshman Wattsita Henley said.

The fall class, which ended earlier this month, was five high schoolers, three girls and two boys, and most did not seem like the types police really need to worry about.

Freshman James Cross Jr. said the closest he has ever gotten to drugs is seeing weed in a bag at school.

“One of my friends showed me a bag, and I don’t know why but I just started laughing,” James  told the group.

The other boy, Jermaine Robinson, has gotten into some trouble in the past.

He left Englewood to live with his grandmother in suburban Hazel Crest for a few years.  He said he came back because it was just too quiet out there.

Robinson is about to start at Winnie Mandela, an alternative high school in the South Shore neighborhood.

He likes working with his hands, so he is trying to learn how to DJ.

His ultimate goal is to be a computer engineer.

“Because like, when I was in 5th grade we did a program, and I earned a computer and I was taking it apart and putting it back together and stuff like that,” Jermaine said.

Goree-Pruitt said she is not worried about what type of kids they are reaching, adding that she is just glad to be reaching any.

“ All I can say is that you touch one you reach another one, because they’ll tell, they’ll tell their friends.”

The next radio class starts in January.