Two years ago, I founded the Chicago Hall of Fame.

What–we didn’t have a hall of fame before then? Today there are halls of fame for aviators, inventors, songwriters, police, rock-and-roll, and every sport in the world. But before 2010, there was no Chicago Hall of Fame. That's why I started one on my old "Unknown Chicago" blog.

You might say that the first hall of fame was developed by the Catholic Church–think of the roster of canonized saints. However, the modern idea dates from 1900, with the founding of the Hall of Fame for Great Americans in New York.

Anyway, here are my simple rules for induction--

(2) The person named must have made a major and long-lasting impact on Chicago, or have helped publicize Chicago to the wider world.

(3) The person named need not be a native of Chicago, but must have made her/his worthy contribution while living in Chicago.

The Chicago Hall of Fame currently has sixteen enshrinees--

Some of these people are my choices, some reflect suggestions I received from readers of my former blog.

I gave a lot of thought to how we should memorialize these people.  Busts in a museum are forgotten, so we have to do this out in public. The Hollywood Walk of Fame idea has been worked to death by the Buy-a-Brick craze. 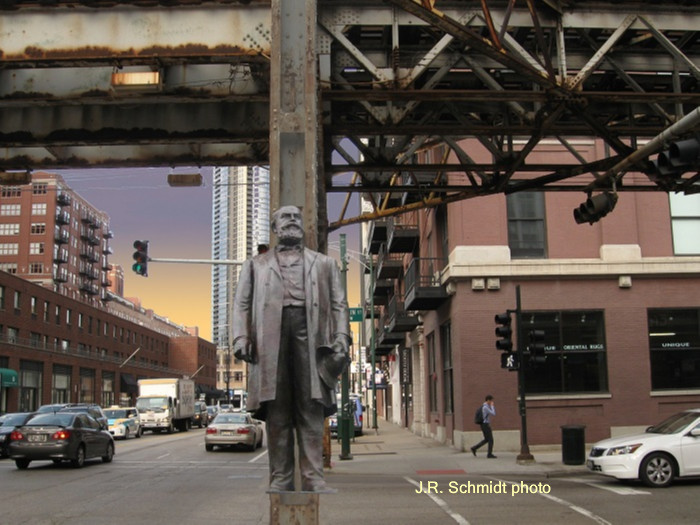 My solution incorporates an iconic, highly-visible part of Chicago’s heritage. We produce statues of the honorees—and attach them to sidewalk pillars of the ‘L.’

The stretch along Franklin Street between Kinzie and Chicago Avenue is perfect. The "L" pillars are all on the sidewalk, and there are about a hundred of them. The location is close to the major tourist areas. Putting the Chicago Hall of Fame there would also spruce up a pretty depressed-looking street.

So send me your ideas for further honorees in the Chicago Hall of Fame. And contact whatever movers-and-shakers you know who could make this idea a reality.

The Chicago Hall of Fame under the Franklin Street "L"—now that would be real public art!