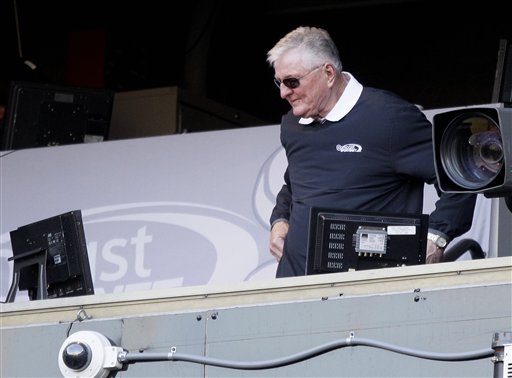 Lead story: A recent study of Major League Baseball announcers revealed something absolutely shocking: the White Sox crew is almost five times as biased as all other announcing crews. Of course, most of those comments can be attributed to Hawk Harrelson (while Steve Stone continues to be a consummate professional in the color commentary seat). Admittedly, there are issues with the study by the Wall Street Journal, not the least of which is that the sample size is simply one game. And yet it still perfectly nailed why Harrelson is, far and away, worse than all the other announcers. It doesn't take a full season of viewing to understand Hawk's bias and how that gets in the way of his ability to actually call a good, clean ball game. Admittedly, Len & Bob aren't exactly the most dynamic pair on television (mainly because the team rarely gives them reason to be excited) and they have moments of hometown bias, but they're at least consistent in their abilities to be objective and call a good, clean ball game. It’s no surprise to see Hawk top the list nor that he absolutely loves it, too. I admit my own bias as a Cubs fan may be interfering here, but this goes beyond team allegiance. I know plenty of Sox fans who roll their eyes at Hawk. He lacks the humor of Uecker and the knowledge of Scully. Heck, Stone is a fantastic commentator in his own right who sometimes sounds like he barely restrain the urge to tell Hawk to shut it. As far as any correlating properties between bias and quality go, well, I’m just going to leave this and this and this right here.

Also: With the teachers strike fading in the rearview, it seems both sides want to move on to other things, now. At a monthly meeting yesterday, both members of the CTU and the Board of Education expressed their desire to move on and enter into the redundant sounding “truce of peace.” Still, there are still tensions present as the union has asked for a list of schools the Board plans to close, but the board denies the existence of such a list. And so as the struggle begins anew, the conversation continues as to who “won” the recent strike. Crain’s Greg Hinz points to a report by the National Council on Teacher Quality that gives a slight edge to the Board over the CTU. As for the PR battle, even former mayor Richard M. Daley couldn’t resist a few subtle digs back at Mayor Rahm Emanuel. Emanuel had laid some of the blame for the tense situation between the Board and CTU at Daley’s feet. Daley initially refused to comment on the situation but still snuck in a few shots at Rahm, saying, “When I took over that, I didn't blame teachers. I said it's our responsibility to make a difference. It's not going to be done overnight. We had to make a difference.” And, thus, Daley was the one who made the most sense which shows you how messed up the situation has been.

And then: Things keep getting weirder in the Drew Peterson case which is strange in itself since the trial has been over for weeks. In the wake of his guilty verdict, Peterson has already fired the one defense attorney who actually knew what he was doing. Now, the rest of his defense team has asked for a delay in sentencing because they’re still squabbling amongst themselves. The infighting is so bad, apparently, it’s keeping the team from working sufficiently to complete a motion for a new trial. And, of course, the previously fired attorney was the one who did most of the work on those kind of motions. No matter how weak the state’s case against Peterson may have been, his own team has done a pretty good job of digging his hole pretty deep without any outside help.

RIP: James Horwitz, creator of the drug AZT, at the age of 93. Created in 1964, Horwitz originally intended to use the drug to treat cancer. After that didn’t work, Horwitz set the drug aside until, in 1986, he earned federal approval to start treating AIDS patients with it (the drug is also used to treat hepatitis and herpes). Horwitz passed away on September 6 but word of his death didn’t spread until last week.

Finally
Because road rage PSA are both cuter and more effective when using British children.