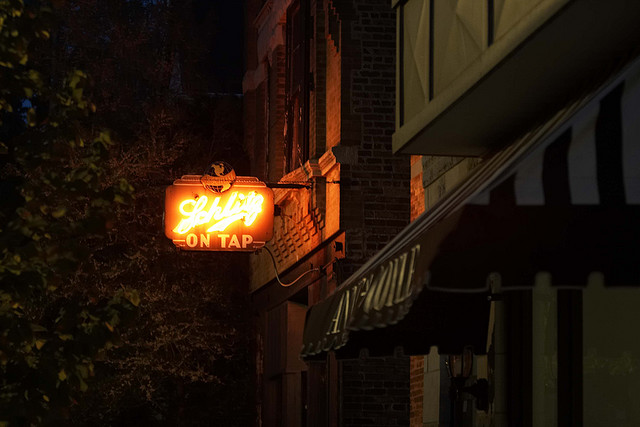 Close to where I rest every night, I did not realize that a little house would instead feel more like a home. Chicago is a unique environment in that some of the most interesting venues for traditional nightlife culture – the dance floor, the dive bar, the music venue – are located on desolate streets and residential blocks. In the case of Danny’s (1951 W Dickens Ave.), a still-thriving bar that turns into something of a club on the weekends, the nondescript storefront is located right off of Damen and on a block full of family homes.
I first went to Danny’s for a friend’s birthday a couple of years ago. She had been especially excited to go to the venue as it was her first time in the space. However, after only an hour or two, she left underwhelmed. But my experiences were markedly different. Despite the fact that it was a cloudy, rainy evening, a line formed outside. Since then, I’ve noticed that this is one of the greatest signifiers of the space. And inside, the bar was beyond packed.
I can never really recall what music is being played at Danny’s. Danny’s is not a venue for national and international touring DJs and performers. It is not a Smart Bar or a Primary. This is not a bad thing, though. Not everyone can appreciate what those venues give Chicago ears. And those places exist for a different reason than Danny’s. For my friends who want to dance, but do not want to experience the River North culture and are not familiar with more experimental lineups, Danny’s is their respite.
Danny’s popularity endures because it is democratic about who comes into and what can be heard in the space. The music found at Danny’s is some of the best in the city, further cementing Chicago’s status as a music hub. It is selective about the music, but not so much that its core audience would be turned off and new customers would not have a good time. More often than not, local DJs host theme nights (such as Night Moves or Loose Joints) ranging in genre from 80s new wave to mutant disco to 90s rap and r&b to reggae and everything in between. In many ways, it is (most) anything goes, making it a welcome venue for all walks of life. It is accessible, both in price, customer base and space. It is not too cool, but rather, like many of Chicago’s dive bars, a place that does not take itself too seriously. 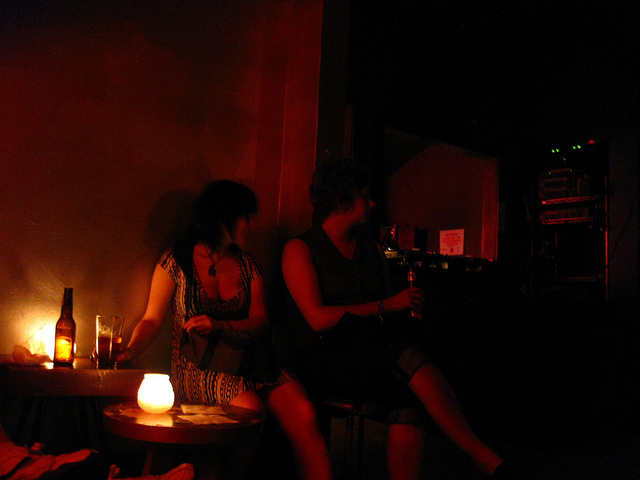 Danny’s is not only about the dancing. I have begun and ended my evening there by going to the bar for different purposes. At the beginning, Danny’s has that perfect combination of a calm evening out: low lighting, a comfortable bar, cheap drinks, and a smart beer list.
Danny’s gets packed later, perhaps too much so, but that only highlights its appeal. It is popular for the non-dance club fan. Not everyone is comfortable enough to go into such spaces, especially if they are unfamiliar with the music. No cover means that anyone can try it out (if they get there quickly enough).
“Calling it a neighborhood bar, I feel, doesn't do it justice,” began Sarah Chandler. “Yes, it is in a neighborhood, but once you walk in, it almost feels like you went back in time.”
We were discussing the appeal of the venue, why it continues to translate for different age groups and different crowds. Sarah and I are friends, but we don’t regularly get together outside of work. But when thinking about what makes Danny’s so great, I realized that she had probably been there.
“One of the things I enjoy most is the diverse crowd. Anyone and everyone can feel comfortable there,” she continued.
And when I began asking friends old and new, ones I only spoke to online and ones I saw everyday, a common thread of understanding and appreciation filtered through our discussions. They had been there and they liked it, plain and simple. It is perhaps not the bar they always turn to because they don’t live in the neighborhood or because they have a regular spot, but it is one that can turn to, again and again, and have a good time. It is reliable and true.
Danny’s is a gathering point, at least on a small scale. I have friends who listen and participate in different activities. But we can come together in this small place, if only for a few hours. My idea of the city growing up was one that served as the coming together of people and places and ideas. But the longer I’ve been here, the less certain I am of that ideal. Danny’s does not represent the entirety of the city. It is mostly young, for one. But it does represent a certain mindset that feels entirely Chicago. It is unpretentious and accepting. We come back because the stakes are low. It takes very little to foster a good time and Danny’s adheres to this mindset, reminding us that the best nights out are often ones that require little effort.
Britt Julious blogs about culture in and outside of Chicago. Follow Britt's essays for WBEZ's Tumblr or on Twitter @britticisms.