Curious City listener Elizabeth Silk and I have been making the same joke about Chicago’s height challenges: She lives in West Ridge, right near Warren Park and the sledding hill that people refer to as “Mt. Warren.”

“We were just joking about it one day and I thought, well, maybe this is the highest point in Chicago,” she said. It stuck with her enough that she sent Curious City this question:

What is the highest point, geographically, in Chicago?

It turns out Elizabeth’s guess is, well, quite a bit off. But it is so darn flat here! It feels like anywhere could qualify. I like to say it to visitors at random times when we’re out and about.

But joking aside, there is an answer. We established one rule: Any high point in the city would have to be natural.

Finding a peak on a prairie

Apart from avoiding the obvious no-go Willis Tower and other buildings, this mission’s a little tougher than you might imagine. Think of a hill you’ve seen around the Chicago area. There’s a good chance it’s a landfill of garbage or some combo of soil, gravel and sand. The hills of Hegewisch — technically the tallest land masses within the city limits by about 100 feet — are mostly off-limits because of their toxicity.

So why is Chicago so flat? We’re on the edge of the Great Lakes Basin, pretty much at the bottom of the bowl. The Valparaiso Moraine to the west and south funnels water down to the lake, which is our lowest point, at 577 feet above sea level. (At least we got that on cities that rest on the coasts.) This is all because 14,000 years ago, Lake Chicago rested on top of this land, formed by a retreating glacier that left the whole area pretty featureless. On average, high points in the Great Lakes states lie 500 miles from a lakeshore.

There’s also the issue of geologic engineering. Chicago has been raked by glaciers, drained, burned, bulldozed, and dug up for centuries now. Who even knows what the physical land used to really look like? For example, Stony Island Avenue was named after what was probably an island in Lake Chicago. The outcropping contained marine fossils, asphalt and the striation that captured glacial movements. However, by the 1920s, it was ripped up in the name of development, despite being recommended for reservation by the Geographic Society of Chicago in 1917.

(Below, we lay out Molly, Matty and Logan's trip in Beverly)

To answer Elizabeth’s question, I pulled up United States Geological Survey topographic maps and looked to that ancient lake’s edge, which ran along what are now blocks in the 90s. That’s the circuitous route this carpetbagger took to find an answer. Locals, though, would have told me to look south immediately.

In A History of Beverly Hills, Chicago, a thesis for the University of Chicago dated 1926 and held at the Ridge Historical Society, one Mrs. Walter F. Heinemann (or Cora DeGrass Heinemann, by 2013 standards) writes about 19th century Beverly: “On the physical side the strongest elements have been topography and transportation, in the development of Beverly Hills. It is the highest land in Cook County and could be used for farming when miles of land surrounding it were little better than swamps.” 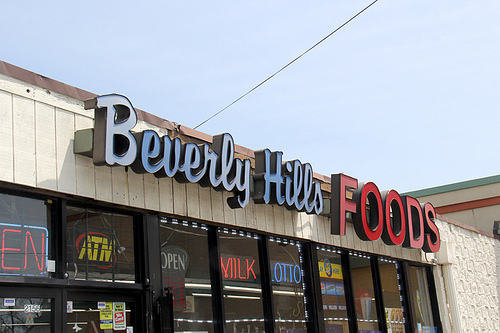 Mrs. Heinemann also excerpted W.W. Barnard comments about the neighborhood’s view. In 1894, he wrote that from 101st and Longwood “you may look north over an unbroken prairie and see in the distance the smoke hanging over Chicago, which then extended no further south than 12th Street.”

Beverly lies north on the Blue Island Ridge. Unlike Stony Island, Blue Island is a moraine, basically more glacial debris. I scoured the contour lines and identified a few hilltops that were higher than 670 feet. Now that I selected my peaks, I needed a Sherpa. I called up my friend, Matty Ryan. He grew up in Beverly and is a natural tour guide. Curious City producer Logan Jaffe joined the party as well, armed with cameras.

We started on Longwood Drive, which runs along the shore of Lake Chicago. You can see the sloping lawns that have smoothed out the natural ridge a little bit. Beverly is really nice. It used to be referred to as the suburbs and it sure has that feel. The streets are kind of “protected” by one-ways, turnarounds, and cul-de-sacs, allegedly built for safety but ask an honest resident and they’ll tell you they continue to maintain the segregation that makes you feel like you’re in Winnetka when Auburn Gresham is less than a mile away.

We wound through a few blocks and drove up Leavitt Street, to the point that my map was saying was 670 feet above sea level, or about 100 feet above our lakeshore. This is also the point named as the highest in Chicago when you use Google to get to Wikipedia. (That’s nothing that a serious journalist would do, of course, but it turns out Wikipedia’s right on this one.)

Next we headed over to the Dan Ryan Woods at Leavitt and 89th Street. Making sure we knew the real history of the area, Matty said, “This is also where we used to go and do bad things when we were little. Like … drink beers underage. I don’t know if the NPR audience is ready for that kind of stuff.” 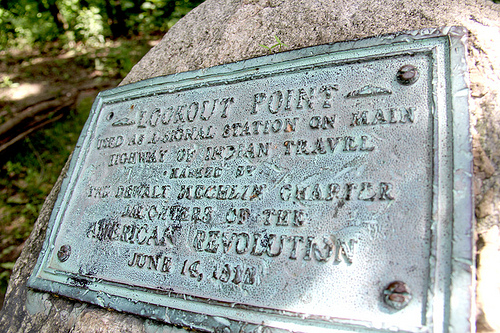 We were still at 660 feet here in the Dan Ryan Woods park, but we did actually have a hilltop to look down and a cool view of the Loop. To the east, there was a dubious marker in a copse of sycamores.

Nice views and shady history aside, turns out this point is only at 660 feet. This hill is not technically the highest point, but it does offer the highest natural viewpoint.

The end of the rainbow

We reoriented and walked down Western Avenue to the other 670-foot contour interval that begins at 91st Street. There was literally no discernable elevation gain, though there was plenty of traffic.

92nd Place and Western might have a view of a Menard’s and neither the green hills nor the view at the Dan Ryan Woods, but the corner carries a unique, remarkable feature: Rainbow Cone, a Beverly institution. For the uninitiated, the signature treat is chocolate, strawberry, Palmer House, and pistachio ice creams plus orange sherbet piled on a cake cone. Matty used to work there in high school.

“It takes awhile to learn how to make a cone like that,” he said.

A magical treat for a magical spot. Elizabeth, you should get one and then take a walk back to 87th to get the full Top of Chicago Experience.

Special thanks for research help to Edris Hoover at the Ridge Historical Society.