Dabney Lyles, a graduate student at DePaul University, spent spring break in Salvador, Brazil. She noticed the region had a huge technology cluster and how closely knit it was to the local universities. Chicago, she figured, has even more schools than Salvador, so that got her thinking about this Curious City question:

What economic impact do local colleges and universities have on the city’s economy?

There are lots of ways to answer this question, though, so Dabney and others thought it would work to focus on how a university can benefit or hinder the economic growth of its surrounding neighborhood. 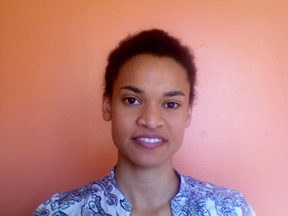 Makes sense sense, right? After all, the Chicago metro area is huge, and the higher ed community’s large, too, with more than 90 colleges and universities.

And the neighbors can be the better or the worse for it.

The immovable ‘eds and meds’

Before diving into a specific example from the city’s South Side, you should know there’s actually been quite a bit written on this topic. One researcher with a birdseye view happens to be Chicago’s own David Perry, a professor of urban planning and public affairs at the University of Illinois at Chicago.

Some of his titles suggest we should think of colleges and universities as anchor institutions.

Perry says it’s difficult to move these entities from one city to another. (Consider, for example, what it would mean for the University of Illinois at Chicago to, um, leave Chicago).

“What is a university, a hospital, a government doing to create, to build the place, develop the place? Boeing may leave in another five years, but the University of Chicago is going to be here,” he said. “It’s not going anywhere.”

And higher ed’s tendency to stay in place means a good deal of its money stays in place, too. Perry says urban institutions enroll 14 million students each year. They generate over $700 billion in gross physical land assets and take in more than $405 billion in revenue.

“We spend over $340 billion every year in the communities around us on everything from toilet paper to faculty,” he said.

Perry says some of those city dollars are generated because urban universities are also developers. He points to the academic corridor in downtown Chicago. DePaul’s University Center was once the Goldblatt store.

“The Goldblatt people, like Marshall Field’s, Carson Pirie Scott left the corridor,” he said. “Their leaving embodied what a lot of stores were doing. The private sector, the market sector was just bailing out of the city of Chicago.”

For a long time, that large space of real estate in downtown was like an empty donut hole. No tax incentives or a cheap price could get a private business to move in. But with the help of then Mayor Richard M. Daley, DePaul University moved in. Daley, by the way, is a DePaul alumnus.

“It did three things. The top floors are graduate floors. The middle floors, the city leased from DePaul and DePaul then got a long term client to pay off the loans it took out to retrofit the building,” he said. “And the bottom floors went to the private sector.”

That includes stores and restaurants that cater to students and faculty, as well as people working around the downtown area. 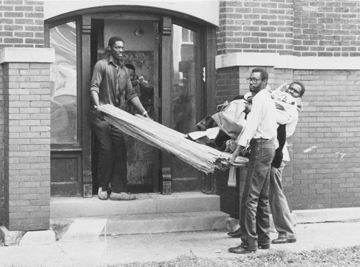 While the city doesn’t get much in terms of property tax from this deal, Perry says it profits from the private businesses and helped spur more development around a once stagnate area. Since the buildout in the early 90s, Chicago’s academic corridor now houses 30 universities and colleges.

The (economic) monster on the midway?

But Perry also says treating a university as a developer can cut both ways; yep, it can be a boon, but it can also cost the surrounding neighborhood. That goes for several Chicago universities, which have had their fair share of contentious relationships over the years.

There are several examples. There’s UIC, which struggled with the Little Italy neighborhood while building its East Campus. And in Evanston, the city government and Northwestern University debate the school’s tax exempt status.

And then there’s the University of Chicago.

The U of C sits in Hyde Park, a somewhat tony South Side neighborhood that — economically speaking — didn’t really have a lot happening in it for many years.

Arguably the most contentious relationship the university has had in the past is with the nearby Woodlawn neighborhood. In the 1960s neighbors and university officials fought over plans to develop in the area. Mattie Butler, founder of Woodlawn East Community and Neighbors, remembers the decades-long back and forth. 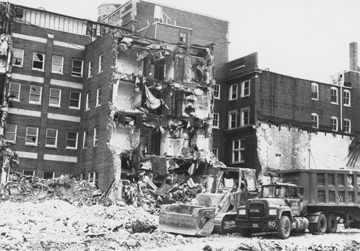 Butler says during the 1960s, the university bought property around 60th and 61st Streets in Woodlawn. This is after the school dramatically developed areas in Hyde Park.

Butler says poor people were driven from their homes as new university development went up. Community members organized against the university’s efforts, and were able to take a property called Woodlawn Gardens at 63rd and Cottage Grove to house low-income residents.

“They didn’t do it right,” she said. “It wasn’t built right, and so after about 10 years, 15 years, they started having massive problems with everything over there and not enough money to support it. And it was infested once again by gangs.”

The property was eventually foreclosed on, and the U.S. Department of Housing and Urban Development took possession in the 80s. It became Grove Parc, and is once again being redeveloped into Woodlawn Park.

Butler blames the university’s aggressive plans of the time for the early failure.

“But the University of Chicago since the time of us having a real issue with them, not playing a role that we thought was a well played out role, has since come to the table with — I’m hoping — some sense,” she said, adding the institution deserves a rating of 7 out of 10. In particular, she lauds the university’s role in improving local schools.

University Vice President of Civic Engagement Derek Douglas admits the school has created barriers, but it’s using some of its economic might to forge a new path.

“What we’re trying to do more now is create a bridge between the university and the community,” he said.

Douglas makes the point by showing us the university’s arts incubator in the Washington Park neighborhood. It was a long-abandoned space that the university redeveloped and opened this past spring.

He says redeveloping the facility was a community effort.

“There has been trust issues in the past where certain things were done that the community disagreed with or didn’t like the way it was approached. And so that creates trust issues,” Douglas said. “As you’re starting to have a new approach, it takes time to build up that trust, to build up that relationship. Spaces like the arts incubator go a long way towards restoring that.”

He says spaces like the arts incubator don’t employ a lot of people, and there’s no direct revenue, but there are economic effects. Spaces like this stabilize a neighborhood, and it can demonstrate to other developers that the neighborhood’s an attractive place to live and invest.

But the U of C’s got designs on its own, contemporary home turf, especially when it comes to bread-and-butter retail.

“Hyde Park is great in so many ways. It’s got this lakefront location. It’s got the university. It’s got good schools, public schools, private schools that are here. It’s got good medical care,” said David Greene, Executive Vice President of the University of Chicago. “But what there haven’t been is the kind of amenities that there have been throughout Chicago for people to focus their energy here.” 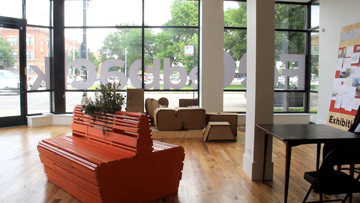 “We’ve done a lot of surveys in this. And the number one thing people wanted was Chipotle,” he said.

So ... assembly line burritos will be coming soon to the neighborhood. But aside from that, Greene says students and residents asked for better shopping, restaurants and entertainment like a music venue and movie theater. That’s while the university is building out its commercial corridor along 53rd Street.

“You’ll start to see the mix of existing structures that have long been here on 53rd Street, as well as the start of some new development that’s coming along. There some areas that we’ll come to that have long been vacant and are now starting to thrive with new businesses,” Greene said.

UIC’s David Perry says more universities are finding it essential to work with their neighbors. If they don’t, he says, they could lose students — a prospect that no city wants to face.

Universities provide trained workers for local companies, indirect jobs for residents, and cash flow for surrounding businesses. The private sector has also done this, but Perry points out that these companies can get up and move at anytime. Not so much with the higher education sector.

Susie An is a WBEZ business reporter. Follow her @soosieon.