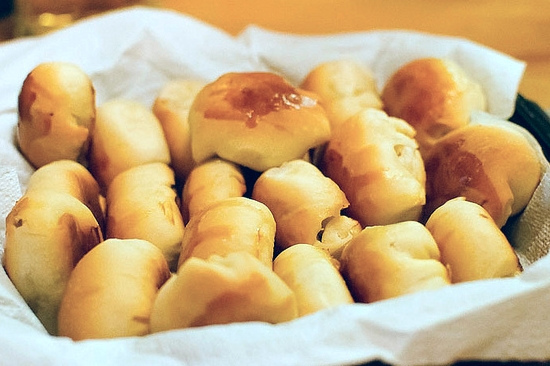 An Ode to Steer & Beer at Publican Quality Meats, pairing PQM with Three Floyds beer, sold out Sunday night, with a portion of the proceeds benefitting Inspiration Corporation. But a second night was added and a few seats remain for the "intimate, educational dinner" which includes an hors d’oeuvres reception, seated dinner, beer bien sûr, and "full after hours access to Publican Quality Meats." (Inspiration Kitchens will provide the food at the Green & Growing Fair on Saturday.)

The topic of the day at the free Re-Thinking Soup at the Jane Addams Hull-House Museum is a "Literary Buffet: What Authors Talk About When They Talk About Food." Join the editors/co-founders of the new food literary magazine Graze, Cyndi Fecher and Brian J. Solem, for a conversation; "delicious, healthy, soup;" and bread from Nicole's Divine Crackers. (Graze hosts their magazine release party on Saturday.)

Join us for the free "Cafe Society with WBEZ" discussion Soup and Bread: Building Community One Pot at a Time with Martha Bayne, founder of Soup & Bread and the author of the Soup & Bread Cookbook, at WBEZ's North Side Community Bureau. "Come for conversation (and soup!) and explore the soup kitchen re-imagined for the 21st century."

The Green City Market Spring Fling at A New Leaf features "cocktails, small bites, music, and a unique auction experience as we raise funds to support our market education programs. Live auction highlights include a day in the kitchen with Charlie Trotter followed by dinner for four at the Kitchen Table; dinner at Rick Bayless' home for eight; and dinner prepared in your home for eight by Kevin Hickey of the Four Seasons."

"In partnership with The Trust for Public Land...Kimpton’s Hotel Allegro is hosting a fundraiser to support the conversion of an elevated, under-used rail line into The Bloomingdale—Chicago’s next great park and trail...The event will feature thought leaders in design and open space, while encouraging guests to share their stories and big ideas about The Bloomingdale. Cocktails and small plates will be served from...312 Chicago, Atwood Cafe, Sable Kitchen & Bar, and South Water Kitchen."

The 23rd annual Shining Star Ball at the Four Seasons, benefits Clearbrook, "providing the best for people with intellectual/developmental disabilities for more than 55 years." The black-tie event features a cocktail reception followed by dinner and dancing.

The Graze magazine release party at the Smart Museum includes a free copy of issue one, cocktails, a tasting station, admission to Feast: Radical Hospitality in Contemporary Art, and a Culinary Confession booth—"with a prize for the best confession!"

Smelt Fest at the North Shore Yacht Club in Highland Park features nets for dipping—as smelt fishing is called—but it's called fishing, not catching—as fishermen like to say. But no worries: they plan ahead so there will be smelt fried over the fire pit for tasting.

The 20th annual Green & Growing Fair at the Garfield Park Conservatory "plunges into spring by hosting a variety of vendors, workshops, demonstrations, and family activities to get your rusty green thumb up and running" with food by Inspiration Kitchens.

At Smelt-O-Rama at the Forest Park Beach Boating Pavilion in Lake Forest "[l]earn to catch, clean, and cook these tasty little critters!" And eat them too!