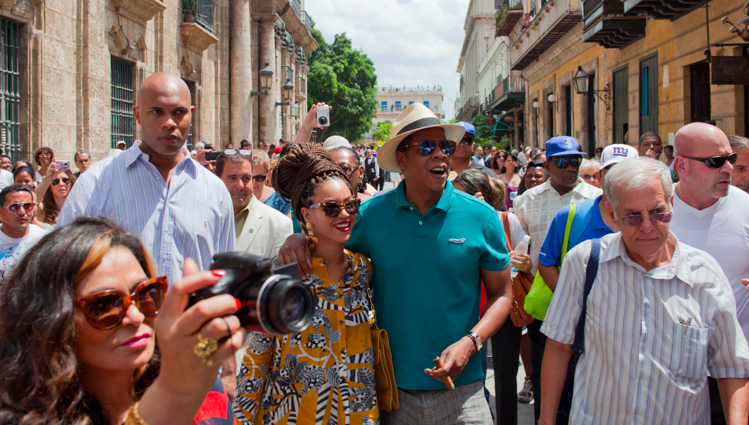 Three takeaways from Jay-Z and Beyoncé’s trip to Cuba:

1) It was legal, but that it was legal doesn’t mean it wasn’t utterly fraudulent.

2) How anybody on earth can think the embargo is doing any good is a continuing mystery of American politics.

3) Anybody surprised by Jay-Z and Beyoncé’s trip to the island hasn’t been listening to Jay-Z. And anybody listening to Jay-Z probably knows nothing feeds a false sense of rebellion more than prohibiting something.

Did anybody think Jay-Z and Beyoncé were going to make such a noisy trip to the axis of evil without a legal license to do so and embarrass the hell of their buddy in the White House?

They’re not that stupid, and Sen. Marco Rubio, Rep. Ileana Ros-Lehtinen and Rep. Mario Diaz-Balart – who asked the Treasury for an investigation into the power couple’s trip – should have known better.

That said, Jay-Z and Beyoncé’s trip was legal because, let’s face it, it’s ridiculously easy to get a license for an “educational” trip to Cuba. Pretty much any U.S. citizen can just sign up and go with any of the 220 agencies, museums, churches and synagogues that take tour groups to Cuba.

A visit to a school, a meeting with artists and the trip qualifies as cultural exchange when, in fact, it's touristic. In other words, the qualifying aspects, for the most part, are performances. If the U.S. opened up to tourism to Cuba, most people would travel to the island the way they do everywhere else – on their own or in tourist groups, not for formal cultural exchange . (The Cuban government, by the way, knows Jay-Z and Beyoncé were there as tourists and described their trip as such on their websites, including Cubadebate.com.)

Which brings us to the embargo itself and the travel restrictions that accompany it. In its 52 year history, the Cuban embargo has accomplished none of its stated goals, including free and fair democratic elections in Cuba. It has, however, caused incredible misery to the Cuban people and encouraged charades like the Jay-Z and Beyoncé trip.

The thinking is that it’s Cuban-Americans in South Florida who force politicians into a corner on the issue. But look here: A 2012 Florida International University poll of Cuban Americans found that 57 percent favored removing travel restrictions to the island for all Americans and 58 percent supported reestablishing diplomatic relations.

Sure, the same poll found that 56 percent of Cuban Americans said they still supported the trade embargo, even though 80 percent said they did not believe the policy worked well.

What’s that about? Wishful thinking, that’s what that is, especially from an older generation who believes their lives were disrupted by the Revolution’s advent. In any case, it’s absurd to continue to formulate foreign policy on the crazy end of a contradiction.

As to Jay-Z – negro, por favor. This full-of-himself-fool has been exploiting his three minutes of once-upon-a-time drug dealing for street cred for more than two decades and comparing his rich privileged ass to Malcolm X and Martin Luther King, Jr. and Che Guevara for just as long.

Remember 2002’s “The Bounce”?: “Rumor has it ‘The Blueprint’ classic/ Couldn’t even be stopped by Bin Laden/  So September 11th marks the era forever/ of a revolutionary Che Guevara.”

Jay-Z was retweeting that sh*t days before going to Cuba.

Or “Public Service Announcement” when he full on appropriates in the most laughable and absurd way of signaling he really doesn’t understand sh*t about Che Guevara: “I’m like Che Guevara with bling on, I’m complex.” And then he talks about chains and the Lexus he’s willing to kill for.

Then there was his wearing a Che t-shirt on“Unplugged” in 2001.

Here’s the thing: Forcing Jay-Z and Beyoncé to pretend this was cultural exchange meant that they were handed right over to cultural authorities who parroted the Cuban government’s familiar bullsh*t.

They were guaranteed not to hang out with ordinary Cubans, from whom they might have found that, while they were treating Havana like a playground, Roberto Zurbano, a black Cuban and a lifetime revolutionary, lost his job as a top literary editor (probably the only black man in such a position on the entire island) for writing an opinion piece in the New York Times about racism on the island.

Indeed, Jay-Z came back from his Cuba trip full of self-righteous rebel defiance about doing what pretty much anyone can do, i.e., go to Cuba. The world woke up today to a new song of his, “Open Letter,” in which he pushes back about criticism of his Cuba trip. You can hear it here.

(And even so, the White House was asked about it at Thursday's news conference.)