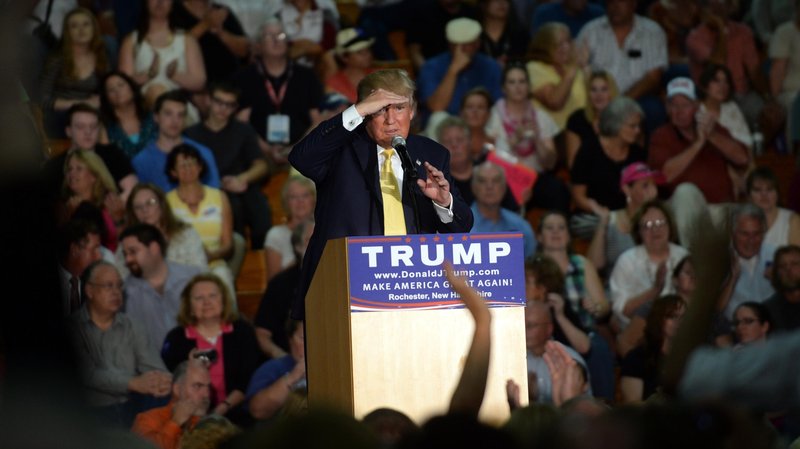 The fallacy that President Obama is a Muslim has tripped up many a politician, and on Thursday night, GOP presidential front-runner Donald Trump was its latest victim.

At a town hall in New Hampshire, a man stood up and asked the billionaire businessman this question:

"We have a problem in this country. It's called Muslims. We know our current president is one. You know he's not even an American. We have training camps growing when they want to kill us. My question: When can we get rid of them?"

Trump, who had even interrupted the man to say, "We need this question," didn't knock down the premise of his question at the end. Here's how he responded:

Trump's campaign says he was talking about the possibility of there being terrorist training camps in the U.S. (something not proven), not Muslims themselves. And his campaign blamed the media for making it much ado about nothing.

"Mr. Trump was asked about training camps. Mr. Trump answered the question and said, 'If there are any, we will fix it.' He said, 'I will look into it.' The question was specifically about training camps," Trump campaign manager Corey Lewandowski told the Washington Post. "The media wants to make this issue about Obama. The bigger issue is that Obama is waging a war against Christians in this country. They need support, and their religious liberty is at stake."

But does Trump — who led the birther crusade questioning whether Obama was really born in the U.S. by demanding his birth certificate — believe Obama is a Muslim?

Trump would have been peppered with questions about those comments and his response Friday night at Heritage Action's presidential forum in Greenville, S.C. But Friday afternoon Trump announced he was backing out of his anticipated speech because of "a significant business transaction that was expected to close Thursday."

Questions about Obama's faith and birthplace have persisted from some on the right throughout his tenure. And the question has become a sticky one for Republicans. Some of their base remains skeptical about Obama's origins and beliefs — something Trump did nothing to smack down.

A CNN/ORC poll out this week showed 29 percent of Americans believe incorrectly that Obama is Muslim. Of that, 43 percent of Republicans believe that to be true — even though it is false. And that number rises to a whopping 54 percent — a majority — among those who say they are Trump supporters.

Trump is not the first candidate this cycle not to set the record straight. Earlier this year, Wisconsin Gov. Scott Walker said, "I don't know" when asked if he believed if Obama is a Christian. His campaign later said he did, but didn't want to play "gotcha" games. But he seemed to double down on that last month, saying he still wasn't sure but, "I presume he is."

John McCain, the 2008 GOP presidential nominee, handled a confrontation similar to Trump's differently. He was famously asked about Obama, his opponent then, being an "Arab"; the Arizona senator took the microphone away from the questioner and shot back. "I have to tell you. Sen. Obama is a decent person and a person you don't have to be scared of as president of the United States."

It's not just presidential politics when this issue has come up. Then-Rep. Michele Bachmann, R-Minn., alleged that her fellow congressman, Rep. Keith Ellison, D-Minn., who is Muslim, had ties to the Muslim Brotherhood.

After Trump's comments — or lack thereof — came out, some of his rivals denounced them. Democrats were quick to bash his response.

New Jersey Republican Gov. Chris Christie said on NBC Friday morning that he would have stopped the town hall questioner in his tracks.

"I wouldn't have permitted that," Christie said on Today. "I would correct him. I'd say that the president's a Christian and he was born in this country. Those two things are self-evident."

Sen. Lindsey Graham of South Carolina, who is close with McCain, said on MSNBC on Friday that Trump is "playing into this hateful narrative" about Obama. He said Trump should apologize and acknowledge he didn't handle the situation correctly.

"Here's the good news," Graham said, "most of us on the Republican side don't tolerate this."