After a two-year state budget stalemate, university leaders said they’re grateful to start the year with guaranteed state money for the first time since 2015. But funding is still below 2015 levels, and many schools said they need more state investment to recover from the impasse. Some schools, like Governors State University in the south suburbs and Chicago State University, have millions in deferred maintenance. Enrollment at the U of I flagship Urbana-Champaign campus is up.

Here’s a look at how Chicago-area public universities are faring:

University of Illinois at Chicago 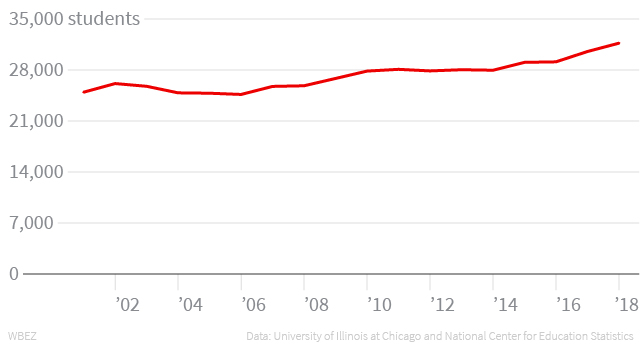 UIC continues to buck statewide trends as it enrolled a record number of students for the fourth year in a row. Undergraduate enrollment has increased 24 percent since 2014. The student body also continues to become more diverse with an increase in Hispanic and black students. The school did see a small decrease in the number of undergraduate transfer students. 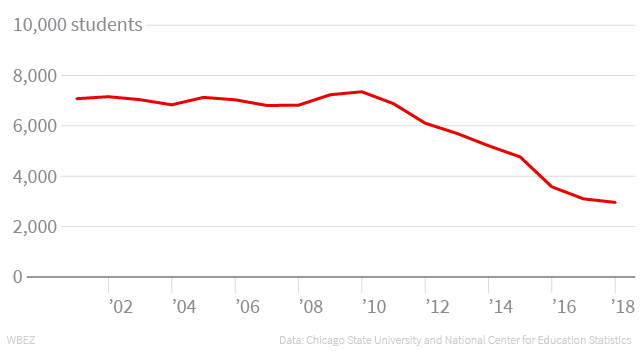 The South Side university continues to lose students, a major problem for a school that nearly shut its doors during the recent state budget impasse. While the school saw a 19 percent (106 students) increase in the number of first-time students this year, it continues to struggle to retain students year over year. The school is hoping to make a comeback under its new president. Leaders point to the increase in new students this year as a sign that students are feeling better about the university’s health now that there’s stable state funding. 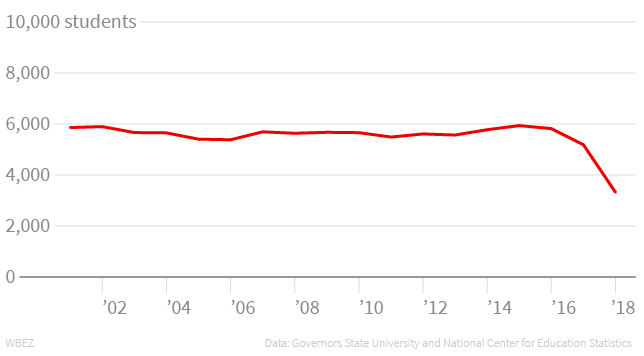 Governors State University in south suburban University Park saw a 2 percent decrease in undergraduate student enrollment. They also saw a large decrease in international students, which they believe stems from a reduction in international student visas approved by the federal government over the past few years. But the school is celebrating a 4 percent increase in the number of new freshmen and a 15 percent increase in new transfer students. School leaders said they worked hard to get more new students in the door to offset declines elsewhere. Financial barriers continue to be a struggle for many students who attend GSU, forcing many to leave before they finish or get accepted but never officially enroll. 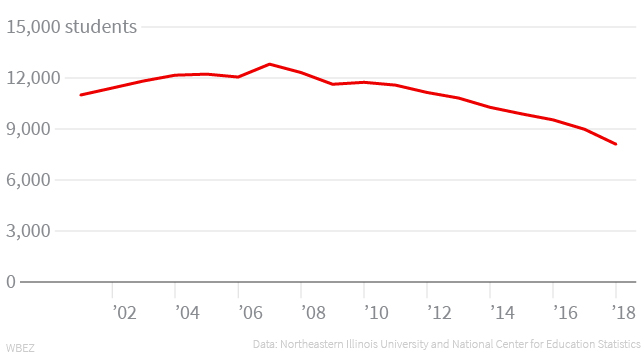 Enrollment totals look especially bleak for Northeastern Illinois University, which continues to see a decline in enrollment in most areas, including first-time freshmen, transfers, and undergraduates overall. The North Side school saw a dramatic 46 percent drop in freshmen from last year, with 451 freshmen enrolling this year compared to 830 freshmen in 2017. NEIU also had its share of struggles during the recent state budget impasse, which forced layoffs and furlough days. The school also has a new president, Dr. Gloria Gibson, who celebrated her inauguration this week.

University of Illinois at Urbana-Champaign 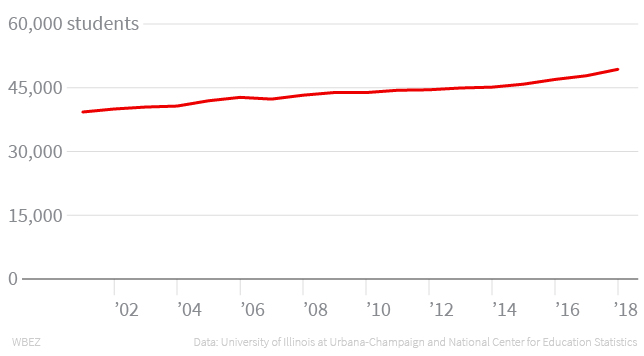 While enrollment increased at the U of I flagship campus, most of that enrollment was among graduate students, including the first class in the Carle Illinois College of Medicine. Undergraduate enrollment remained flat. School leaders said they were surprised by a 3.5 percent increase in enrollment of in-state students, the highest number of Illinois residents in the past decade. That’s good news for higher education leaders and state lawmakers who are trying to combat the state’s “brain drain” of students leaving to attend college outside Illinois.

Correction: A previous version of this story incorrectly stated a 54 percent drop in freshmen enrolled at Northeastern Illinois University. The correct change is 45.7 percent.