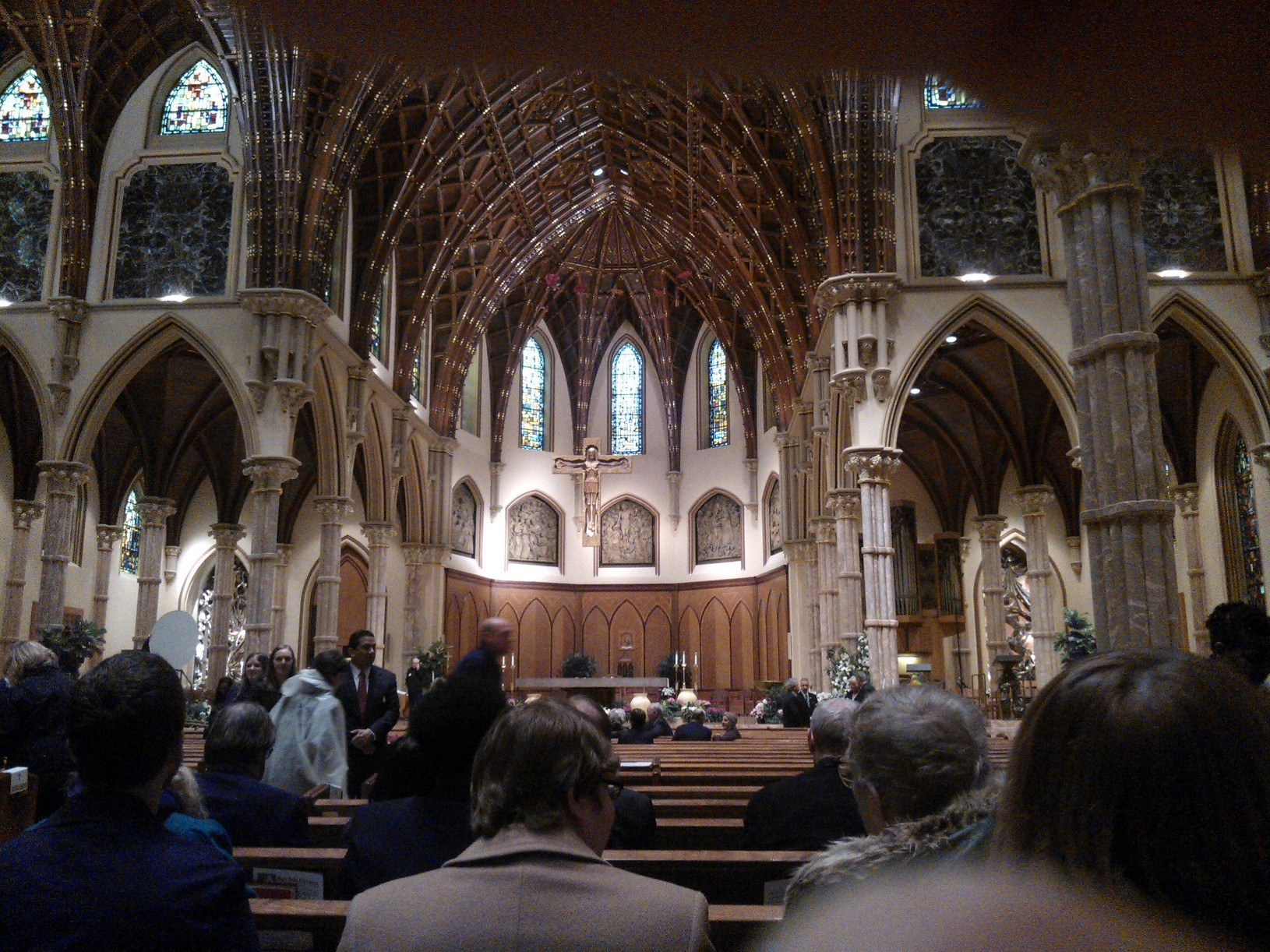 I wasn’t initially planning on going to Roger Ebert’s funeral. Like many Chicagoans, I mourned his death and memorialized him in private, sharing my sorrows about his loss amongst friends who counted themselves fellow “Ebert superfans.” My colleague, Leah Pickett, broke the news to me and at first, I was upset with her for suggesting it was even possible. Ebert couldn't die. However, the Chicago Sun-Times confirmed her story. Just as quickly as we had to process the news of his semi-retirement, there was this. Ebert was gone, like someone switching off a light.

I’ve never cried over a celebrity death before, but I burst into hysterical sobs at the news. I rarely cry, and when I do, it looks more like epilepsy than tears, a flurry of gasps and spasms. Instead of crying, I’m known to slowly leak, like a faucet silently pouring water down a drain. On Thursday, I flooded with emotion, rushing out from every pore. I felt like even my hands were crying.

But when details of his funeral broke, I felt like I had no place there. Who was I to go to his memorial? Why was his death my business? Despite the impact he had on my life, I couldn’t look into the face of Chaz Ebert and tell her that the love of her life meant as much to me as he did to her. I couldn’t even begin to compare our sorrow.

However, DNAInfo reported Sunday night that the Westboro Baptist Church planned on picketing Roger Ebert’s funeral as retribution for Ebert’s long-standing criticism of them. Ebert, a noted humanist and former Catholic, referred to the institution as “odious” and testified his ideological disagreement with them by linking to articles critical of WBC in his many tweets. (The man loved to tweet.)

Calling the beloved critic a “f*g enabler,” Westboro promised to show up at 9:15 a.m. as attendees filed in for the 10 o'clock service. The hate group said in a (totally sane sounding) press release:

"This fool sold his soul for some fame & fortune, forgetting that God has made a simple declaration regarding His people: 'Touch not mine anointed, and do my prophets no harm.' (Psalms 105:15). Now the famed critic is in a new jurisdiction, where he can see the blessings poured out on God’s humble servants in heaven, from his seat of eternal torment & sorrow in Hell!"

For anyone familiar with WBC, you know this trolling, childish behavior is par for the course. This is what they do. Westboro commonly protests military funerals to punish our dead soldiers for society's sins and mocks the dead to generate publicity. When opponents of the group show up to counterprotest, the group uses this as a way to mobilize the right-wing, presenting themselves as marginalized warriors of God in an America that’s leaving them behind. 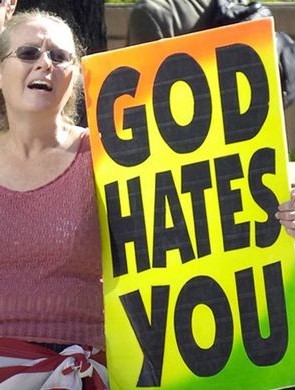 Westboro wants to make you angry. It wants you to scream back at it and stoop to its level. It wants to use hate to spread hate.

I knew that going to counterprotest Westboro wouldn’t solve anything, but I needed to be there to defend Ebert's honor. For all of the times that he championed the little guy and worked as an agent of change and social justice, I needed to stand up for him. I needed to be there. I couldn’t be silent.

I woke up at 7:00 a.m. and arrived at State Street’s Holy Name Cathedral early, expecting that Westboro would already be busy setting up. I pictured vans full of identically dressed women with long hair and skirts of modest length and balding, white-haired men with thick glasses, black ties and megaphones. I pictured people who wore hatred like it was a second skin, one they could peel off when the cameras were gone and the crowds parted.

However, I found no one, except for the funeral goers patiently waiting for their opportunity to honor a friend, loved one or stranger. During the funeral, multiple speakers testified that Ebert was a “man of the people” and a critic who represented America, and the service attracted all types: kids coming as funeral tourists, snapping pictures and commenting on how “cool” it was; colleagues like Michael Phillips, Rick Kogan and Richard Roeper; politicians and local celebrities; and character actors whose faces you couldn’t place, the inestimable litany of those his legacy touched.

Even Rahm was there, back from his time vortex.

While I waited for Westboro, I stood with a budding film critic who grew up in Missouri and was glad Ebert’s last review didn’t end up being of The Host, Andrew Niccol’s critically reviled Stephenie Meyer adaptation. His take on To the Wonder, the divisive new Terrence Malick film, was published the morning of his funeral, as a tribute and testament to his own curiosity and imagination. Malick was one of Ebert’s favorite filmmakers and a cinematic poet Roger Ebert had a lot in common with: They came from the same generation, while sharing the same mystical awe of cinema’s power.

As I talked with these people, I found that they were all looking for something: A woman from Los Alimos, Cal., came all the way to hand out pamphlets and inquire about the state of Ebert’s soul. Her name was Tina.

“Was Ebert Catholic?” Tina asked me. I confessed that I did not know. Tina asked about the state of my soul. I confessed that I did not know about that, either. Like Ebert, I was raised Catholic, but as an adult, I’d given myself the space to doubt and explore other traditions that weren’t the one I grew up in. I related the solace I’ve found in Buddhist meditation and Hindu scripture. I keep a copy of the Bhagavad Gita on my desk. I quoted Joseph Campbell: “If you only know one religion, you know none."

Tina smiled and told me that if I ever wanted to come back, the church was waiting. She handed me a card with St. Maria Faustina’s face on it and told me to pray — for my own salvation and for Ebert’s. “You have a beautiful soul,” Tina said, as if she didn’t expect it to stay beautiful. I wanted to ask her what she thought Ebert's soul looked like, but Tina moved on. She had more trading cards to hand out.

The budding film critic looked at me and laughed. “It takes all kinds,” he offered, as a condolence for our conversation. Then, I remembered the way Tina thanked me for talking to her and giving her the time of day, when most people just ignored her. She seemed to need me as much as she thought I needed her. When Tina approached me, she told me that they wouldn't let her stand with anyone else. I looked at the critic, frowned and put my hands in my pockets, just as it started to rain again.

I began to wonder if I needed Westboro as much as they needed me. I wondered if any of us would find what we were looking for — or even if it was to be found amongst Ebert's ashes.

Suddenly, the crowd began to file in. I looked back at the line behind me and out to the sea of reporters setting up to shoot, collecting mourners’ stories on pads of paper. One of the men standing ahead of me in line went back three times to the same AP journalist, because he kept finding more to say. When we would call her up to him, she smiled, “Got another story for me?”

I failed to spot our friendly protesters, so I was faced with a choice: I could stand outside with the critics of Ebert’s soul and the revelers of his eternal torment. I could wallow in the world’s hate and look into its worst face. Or I could join the people who came to be a testament to love, the folks who couldn’t stop remembering Ebert and the ones who refused to be deterred by rain or the gusts of the Chicago morning. I could turn this dark day into an opportunity for hope and transformation, fighting to keep his work and his memory alive.

I wasn’t dressed for a funeral. I came in my plainclothes, my well-worn black jeans, Cubs hat and striped hoodie, backpack slung over one shoulder. But it didn't matter what I was wearing. I was there.

I went inside and stood between two women, one of whom sported dark velour pants and leopard-print sunglasses; she constantly smiled at me to show how fine she was. The other one came from Glenview and talked about Ebert as if he were a friend. Her name was Kathy. She called him “Roger,” just like everyone else did. 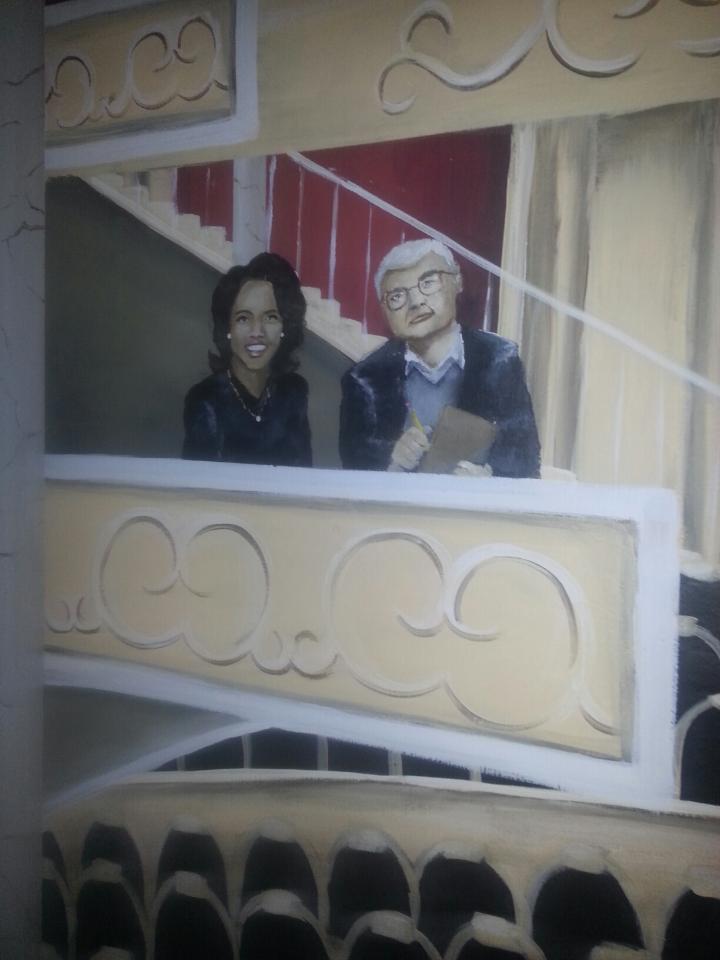 Kathy loved "Roger" so much that she had a portrait of Ebert painted in her house, along with pictures of Peter Sellers and other icons she grew up with. In the picture, Ebert sat on a balcony with Oprah, taking notes and enjoying the view. She hung the illustration in her entertainment room, so she could watch movies along with Ebert; they could enjoy the view together. Kathy told me that she got to show it to him once, and Roger loved it. He even asked for a copy.

To her, Ebert wasn’t just a trusted critic. He was a window to the world. Rahm reminded us that "life is too short not to be shared with others," and when Kathy approached Chaz during communion, she thanked her for sharing her husband with us. He was the most wonderful gift.

When the service ended, I wondered aloud whether the Westboro Baptist Church ever came out or if we had just missed them. Kathy and I laughed that a hate group would target a man known and beloved for his deliciously scathing reviews, sad that he couldn’t be around the comment. I asked her what Roger would have said about his hostile guests. She told me, “I don’t know, but if they came, I bet he would have loved it.”

Westboro never showed up, and we never get to laugh with Ebert in the face of hate. We'd never see what that face looked like or figure out what they were looking for — if they were like the rest of the funeral misfits searching for comfort or someone to share his life with. We wanted someone to listen to us or to cry with, realizing we'd never back get the thing we really wanted. Roger Ebert's stepdaughter, Sonia, told us that Ebert "realized that connecting with other people is the main reason we're here." And as Roeper carried his friend and companion away, that consolation of humanity was enough.

It's too bad Westboro missed Ebert's service. They could have learned something from him.

Nico Lang writes about LGBTQ issues in Chicago. You can find Nico on Tumblr, Twitter or Facebook.